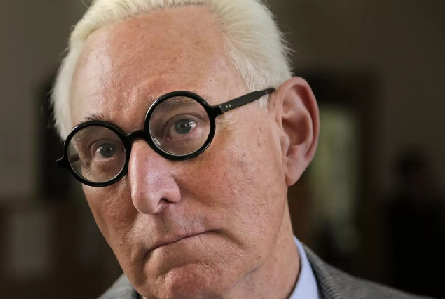 Roger Stone on Monday shared a digitally altered and since-deleted image on Instagram of himself, President Trump and several other people serving in or aligned with the administration wearing spacesuits with swastikas on them.

The photo also includes a swastika in the upper right corner and the words “Space Force” and “in space no one can hear you lie.”

The image was previously posted by critics of the administration on social media, but Stone appeared to decide that he wanted to appropriate it. He has since deleted the post.

I think somebody needs to organize a class on social media for Trump and co. me thinks. The image by the way: 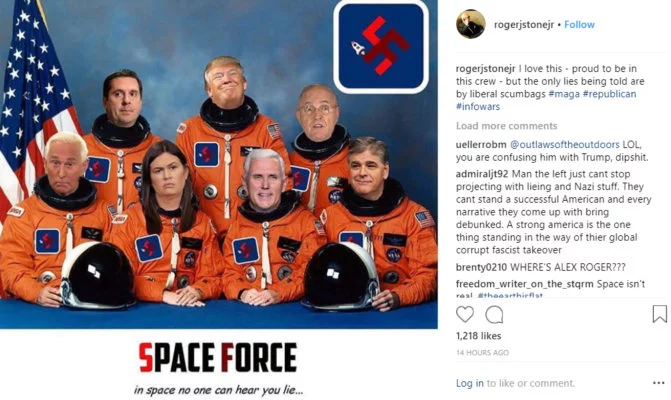 You know what I instantly thought to myself when I heard this news? I thought, surely there's nobody this idiotic to post something like this?? Or maybe he was hacked?? Or maybe it was just a genuine misunderstanding that the 'Space Force' logo would come out looking like a swastika? Heck the digitally printed photos aren't even that flattering?? Maybe trolling? I mean trolling using a symbol of the worst ethnic cleansing, mass killings, of the 20th century? But then ya know what? I realize this isn't an isolated event in today's Trump lead GOP. Few weeks back ol' dear Ronny Paul posted that racist tweet showing blacks and other minorities being associated with the communism infliltration of America. Ya know? The one he pulled down and later blamed on a junior staffer? Or how about the various racist GOP candidates popping up around the nation winning their respective State primaries? Like the guy who won the Missouri GOP Primary who said Hitler was right? Or how about holocaust denier Patrick Little?. Califonian GOP's choice for their congressional state seat?? His buddy Arthur Jones in Illiniois, GOP nominee for their State house seat, shares the same view. But hey, what about those Democrats eh? Maxine Waters telling folks to harass Trump and co. Gosh.

It seems to all be seeping to the surface doesn't it?


Roger Stone is a Dipship. Did he get Trumps approval before he posted this or is this just another excuse for you to come ATS with your daily dose of TDS?


If you are calling out Stone for what HE did, that's cool. But until you can prove Trump had anything to do with this? Take your meds!

Hitler used the swastika so it is now evil.
He also used cups plates and forks and spoons. How much power will you give him?

originally posted by: Metallicus
a reply to: Southern Guardian

so you're making up a thread out of a photo-shop? well that explains it

Please please PLEASE keep posting stuff like this... the midterms are coming!!!

More and more Democrats #walkaway, I was going to say more moderates leave but I don't think your side has any left...

Keep up the hysterical hyperbole!!!! Push HARDER and harder to make sure the entire planet knows EXACTLY what you think about anything that isn't the Borg left!!!

Thanks for your continuing efforts to ensure that the Democratic party will get 20% of the vote this year.

I'm going to walk outside and giggle for a bit.

Weird.. the only two I know in real life are huge Hillary supporters.

I like the picture actually. It makes me giggle

Where is Ben Carson?

Hitler used the swastika so it is now evil.

I'm sure you'd be happy to walk down the street with somebody wearing a big ol' swastika on their shirt right?

No.... no you wouldn't. That's what you're thinking to yourself deep down. At that point, ask yourself why? given your statement above.

Also, what seems to be seeping up?


How many neo nazis do you think there are?

Seems them white supremcaists like some of the Dems too

originally posted by: Southern Guardian
a reply to: howtonhawky


I'm happy to see you have humor and not just political animosity.

That was a good one though

His voice probably puts himself to sleep.

not all liberals are SJW idiots, but all SJW idiots are liberals. Wow, I think you are on to something here.

The article states, as you included in an excerpt, that the image was previously used by critics of the administration, right?

And Stone's comment attached to the image states that... "but the only lies being told are by the liberal scumbags."

So it seems clear that he posted it to throw it back in liberals' faces (as in, your lies don't affect me).

Feel free to refute but what sticks here is Stone's comment "lies being told by liberal scumbags", not the photo created by critics of the administration attempting to spread lies. 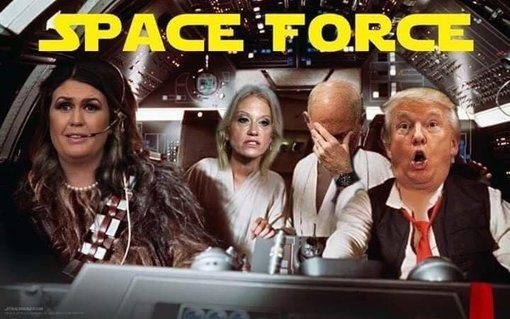