Midnight Strikes in the US and we must ask ourselves, how much power is too much?

PROJECT MIDNIGHT CLIMAX started as part of the expansive PROJECT MK ULTRA.
It was exactly what it sounds like.
Spook OPS using taxpayer funds for Drugs, Hookers, and Blackmail.


On an elegant dead-end block on the north side of Telegraph Hill is 225 Chestnut St., a swanky modernist building with panoramic bay views. It’s about the last place you would have expected to find a clandestine CIA program during the Cold War.

Yet from 1955 to 1965, this building was the site of “Operation Midnight Climax” — a top-secret mind-control program in which CIA agents used hookers to lure unsuspecting johns from North Beach bars to what they called “the pad,” then dosed the men with '___' and observed the X-rated goings-on through a two-way mirror while sitting on a portable toilet swilling martinis

The locations of the safehouses raises some eyebrows. Who knew, and when?
There had to be people running cover and disposal of course.
R&D
the science of it.
application.
hundreds of people

The project consisted of a web of CIA-run safehouses in San Francisco, Marin, and New York City. It was established in order to study the effects of '___' on unconsenting individuals. Prostitutes on the CIA payroll were instructed to lure clients back to the safehouses, where they were surreptitiously plied with a wide range of substances, including '___', and monitored behind one-way glass. Every one of these acts was blatantly illegal, but several significant operational techniques were developed in this theater, including extensive research into sexual blackmail, surveillance technology, and the possible use of mind-altering drugs in field operations.

The safehouses were dramatically scaled back in 1963, following a report by CIA Inspector General John Earman that strongly recommended closing the facility. The San Francisco safehouses were closed in 1965, and the New York City safehouse soon followed in 1966.[citation needed]

In 1974, the journalist Seymour Hersh exposed the CIA’s illegal spying on U.S. citizens and how the CIA had conducted non-consensual drug experiments. His report started the lengthy process of bringing long-suppressed details about MK-Ultra to light.[2] Project MKULTRA came to light in the spring of 1977 during a wide-ranging survey of the CIA's technical services division. John K. Vance, a member of the CIA inspector general's staff, discovered that the agency was running a research project that included administering '___' and other drugs to unwilling human subjects.


Memebers of the Program were quoted as saying that any weird exotic drugs that they themselves were too afraid to try, they would send off to San Fransicso.
Hundreds of scientists, some former nazis, were involved in this project.
The soul-lessness of it. so sick and bizzare.
and yet, nearly all of the documents and research involved was destroyed by the project members before the Inspector general raised a ruckus after stumbling upon the safehouses in some records.


The first field test in 1943 was administered to a New York mobster by George White, a tough-guy OSS captain who had been an agent in the Federal Bureau of Narcotics. The results were promising — White’s sidekick said “every (subject) but one — and he didn’t smoke — gave us more information than we had before” — but ultimately inconclusive.

in the wake of the exopure of these illegal programs not a single person was charged with a crime. nobody prosecuted.

Logically speaking, this was a no-loss win for the C EYE A.
Tons of research, R&D, methods developed, intel gleaned and policy formed with nearly no blowback.
And why would they have stopped there?
When you look at its history you wonder what could be accomplished in 50 years.
Who knows how many politicians, civilians, businessmen, and people of all walks have been co-opted by this monstrous design.
And TO WHAT END?

dashen.... you da person per usual. Why does the west coast and Esalen ring bells?

Speaking of mind control, how about the end to Mad Men?

posted on Aug, 12 2018 @ 12:21 AM
link
George Hunter White was an ex-FBI and Narcotics man co-opted by the CIA for MK-ULTRA duty and the gig he named, "Operation Climax."


A little more about George White and Sidney Gottlieb:

"[White] was a real hard head," said Ritchie, who regularly ran into him in courtrooms and law enforcement offices in downtown San Francisco. "All of his agents were pretty much afraid to do anything without his full approval. White would turn on them, physically. He was a big tough guy."

American chemist Sidney Gottlieb was the brains behind White's brawn. It was the height of McCarthyism in the early '50s, and government intelligence leaders, claiming fear of communist regimes, were using hallucinogens to induce confessions from prisoners of war held in Korea, and brainwash spies into changing allegiances.

What better way to examine the effects of '___' than to dose unsuspecting citizens in New York City and San Francisco?
www.sfweekly.com...


Here's a letter George Hunter White wrote to his boss Dr. Sidney Gottlieb years later, and what an "ends justifies the means" attitude does to a psyche and value system:

By all accounts, White enjoyed the undercover work he was doing. Perhaps a little too much. He would write in a 1971 letter to Gottlieb,

"Of course I was a very minor missionary, actually a heretic, but I toiled wholeheartedly in the vineyards because it was fun, fun, fun. Where else could a red-blooded American boy lie, kill and cheat, steal, deceive, rape and pillage with the sanction and blessing of the All-Highest? Pretty Good Stuff, Brudder!"

evil wicked beasts.
the lot of them

posted on Aug, 12 2018 @ 01:05 AM
link
A good resource on this topic is a book by John DeCamp, a
former Nebraska State Senator. He wrote his groundbreaking book
about the sordid history of the case called The Franklin Cover-Up:
Child Abuse, Satanism and Murder in Nebraska. Senator DeCamp
was the attorney who defended Paul Bonacci, who was awarded
1Million in damages in the year 1999 as a victim of MKULTRA.

Logically speaking, this was a no-loss win for the C EYE A. Tons of research, R&D, methods developed, intel gleaned and policy formed with nearly no blowback.
And why would they have stopped there?

They are unlikely to stop because the real controllers behind it belong to blood-lined families. Those have a belief they have been put on this planet to rule us.
These people surprisingly I have recently become aware of also like to sacrifice trees, and smoke cheap cigarettes.

They just changed the location ... to another country.

Following the collapse of the USSR, much of this type of work shifted to countries and Poland was one such country that the CIA got its teeth into early after the fall.

Who knows which countries were involved.

The major reason these and other really off programs were allowed to proliferate was via the entrenched concept of compartmentalization.

That is how you hide things from your own people. 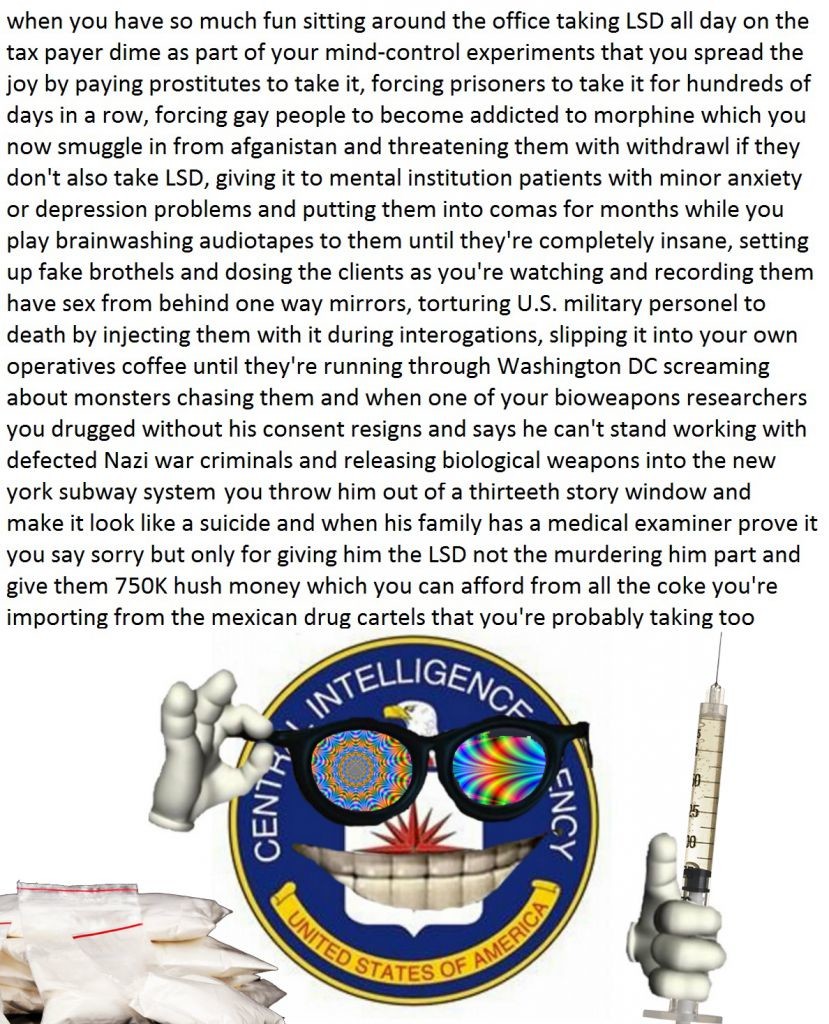 Yep...I think when JFK said he would bust the CIA into a 1000 pieces and let the wind scatter the ashes (something like that) I wish he would have lived a little longer to carry out his threats.

posted on Aug, 12 2018 @ 06:44 AM
link
What scumbags, but not entirely surprising for the CIA. These agencies do not deserve our trust or respect......but how some want to trust them completely in certain matters, *cough cough, Russia, cough cough* is beyond me.

originally posted by: burntheships
A good resource on this topic is a book by John DeCamp, a
former Nebraska State Senator. He wrote his groundbreaking book
about the sordid history of the case called The Franklin Cover-Up:
Child Abuse, Satanism and Murder in Nebraska. Senator DeCamp
was the attorney who defended Paul Bonacci, who was awarded
1Million in damages in the year 1999 as a victim of MKULTRA.

I wonder how the grand jury came to their conclusions? May have to look that one up.

In 1992, DeCamp wrote a book about the Omaha's Franklin Credit Union scandal titled "The Franklin Cover-up: Child Abuse, Satanism, and Murder in Nebraska." The allegations leveled by DeCamp led to a grand jury investigation in Douglas County.

The CIA ruined many countries actually, a lot of them still dealing with the consequences to this day. I sometimes wonder how South America would be doing now if the CIA hadn't "intervened" there on countless occasions? And Iran, Iraq, South East Asia etc etc, even long time staunch ally Australia(strongly rumoured to be behind the ousting of gough whitlam , Aussie Prime Minister sacked under mysterious circumstances. Also the Nugan Hand bank, apparently used to launder CIA drug money and other dirty deeds).
edit on 12-8-2018 by Osirisvset because: (no reason given)
edit on 12-8-2018 by Osirisvset because: (no reason given)

Secretions brings forth nasty images, why not Secretians?

It would appear that the laws are only in place for the sheeple.
edit on 18CDT09America/Chicago03390931 by InTheLight because: (no reason given)

Scary! And fascinating. And evil.

This is something else where certain people are getting of at lies and manipulation.