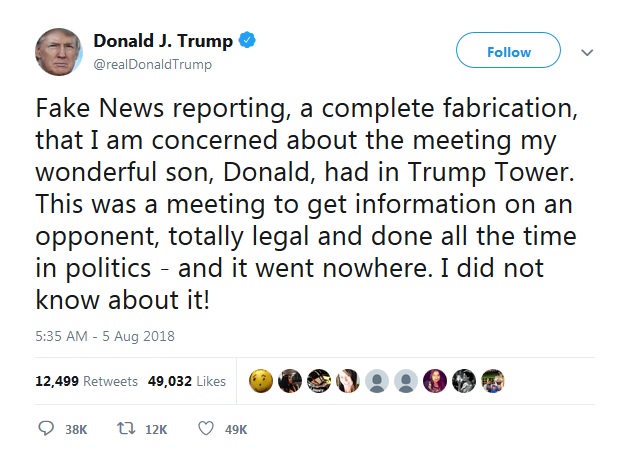 President Donald Trump on Sunday acknowledged that the 2016 Trump Tower meeting between a Kremlin-connected lawyer and his son was to collect information about his political opponent, casting new light on a moment central to the special counsel’s Russia probe.


Should someone tell Donald Trump what the standard depth of the hole he is digging should be? I think it's six feet.

After an almost a year and a half of denial and deception, we now know straight from the President's mouth that the meeting was not about the adoption of children but rather what everyone already knew -- an exchange of political dirt for political favors.

But 13 months ago, Trump gave a far different explanation for the meeting. A July 2017 statement dictated by the president read: “We primarily discussed a program about the adoption of Russian children that was active and popular with American families years ago.” But since then, the story about the meeting has changed several times, eventually forced by the discovery of emails between the president’s eldest son and an intermediary from the Russian government offering damaging information about Trump’s opponent, Hillary Clinton. Betraying no surprise or misgivings about the offer from a hostile foreign power, Trump Jr. replied: “If it’s what you say I love it especially later in the summer.”

What he, of course, didn't realize with this tweet 6 hours ago is that we already know Veselnitskaya was a Russian agent, we know that they discussed the Magnitsky Act as that was her role and mission in this country; we know that the Trumps said child adoptions were discussed as well. This gives credence to the Magnitsky discussions as the child adoption ban was a direct result of the Magnitsky Act being passed. We can now deduce that in exchange for most likely promising to do a favor and work on taking down the Magnitsky Act, political dirt on HRC was offered in exchange. Perhaps more than just dirt? Assistance?

What do you call an act like this -- "Hey, you help me get elected and I help you with dismantling the legislature that is hurting your country?"

But legal experts have pointed out several possible criminal charges, including conspiracy against the United States and aiding and abetting a conspiracy. And despite Trump’s public Twitter denial, the president has expressed worry that his son may face legal exposure even as he believes he did nothing wrong, according to three people close to the White House familiar with the president’s thinking but not authorized to speak publicly about private conversations.


What will DJT do if Don Jr. gets arrested? Will he come clean to protect his family and accept the blame? What if Cohen is being truthful that he knows DJT knew about the meeting ahead of time? That would make him accomplice to said conspiracy.

Can someone who actually likes DJT and is close to him please take his phone away before he does something worse than incriminate himself? I think his phone should be classified as a weapon of mass destruction.

Quite a bit of speculation by you in that OP.

Collusion is not a crime.

Funny how long it took to get someone to post this about Trump's morning tweet. Took you to do it. Why is that? Where are the Trump supporting regulars? Perhaps they know this isn't good news for Trump and Jr.

Why do Trump supporters not call out the President on his lies? I'll tell you why. Then they would have to admit they've been duped. No one wants to be a fool. But to keep overlooking Trump's lies only makes you look more foolish.

I don't expect anything but deflection and justification of this Trump lie by his diehards. That's all sheep know. That and this really really stupid "Q" crap. So reminds me of pizzagate. What a joke.

I can't wait for the President's next lie. I doubt I'll have to wait more than a few minutes, depending how many rounds of golf he might be playing.

Oppps. Took me too long to write my comment. Someone already beat me to "but Hillary"

HDS is strong with this group.

originally posted by: TonyS
a reply to: Kharron

No, information gathering would not be illegal.

A question for you, would an exchange of information for political influence be legal? Exchange of political favors with a foreign government?

You're assuming the Russians offered help to Trump for nothing in return. Let's assume they are not so altruistic, just for a moment.

The fact that politics running for election seek for information on their opponents shouldn’t surprise you.

And right on schedule, "but Obama".

Is that against the law?

If that's the best you have, you are grasping at straws.

Yup. You Trump hatters wants to dismiss all corruption from Obama administration.

Have a problem with that?


originally posted by: TonyS
a reply to: Kharron

No, information gathering would not be illegal.

A question for you, would an exchange of information for political influence be legal? Exchange of political favors with a foreign government?

You're assuming the Russians offered help to Trump for nothing in return. Let's assume they are not so altruistic, just for a moment.


Assuming there was to be some type of quid pro quo involved is a stretch of reality. Like I said, grasping at straws.

Trump is becoming more and more unhinged with each tweet. It’s amazing to see so many people recently being taken down because they wrote something terrible on Twitter, Roseanne, James Gunn, but Trump continues to be immune to this phenomenon. Well, maybe that is until now, NYT: Mueller looking through Trump's tweets.

For his own self preservation he should stop tweeting.
edit on 5-8-2018 by Swills because: (no reason given)

I can't wait to accuse every leftist candidate of treason the next time they look at opposition research!


would an exchange of information for political influence be legal?

Would paying for the information be illegal?
Again, before the election, I don't really know.

I just queired on it and it appears so.

True, but if the NYT says that he DID know, then he probaby didn't.

Yes, she did SWITCH to talking about Russian adoptions and lifting sanctions, which prompted the abrupt end of the meeting.

None of this was denied. It WAS SUPPOSED to be for dirt. They had none. The meeting was a set up by FusionGPS. They were being paid by the DNC and Clinding campaign jointly, which is a violation of election finance laws.

He did not lie. You need to twist and cherry pick statements out of context.

The email chain by Don JR was released BEFORE the statements by Trump and was done so willingly and very openly.

Claiming the moral high ground against one politician when ALL politicians lie, regardless of party, makes you look foolish.