posted on Aug, 5 2018 @ 09:13 AM
link
a reply to: IgnoranceIsntBlisss
Oh good, so drone bombs are still limited to the irregular forces of ww3 in the middle East?? Thank goodness. Im glad A corrected official story was released, otherwise I would not know what to believe.

And if this guy decides to attack Colombia that would become quite the problem for him. The state of my parents is highly trained And experienced in jungle and urban combat due to the recently ended sixty year civil war. Not to mention Colombia is the strongest And most loyal Ally in South America.

I believe they would gladly host US forces to assist with their regional affairs.

Too bad it failed. Clearly it wasn't real, unfortunately. Our country no doubt has much better ways of putting socialist dictators down, ones that wouldn't give his "security" (who was standing there with ballistic blankets, an unusual choice) time to shoot it down or to cover him.

Nevertheless, this is one case of "interference" I would agree with. Generally we should leave other countries alone, but no socialist constitutes a real country. The socialist should be pursued wherever its wrong and morally bankrupt ideology goes.

Too bad Maduro's worthless socialist self is still breathing.

After yall invade Venezuela, you should stop by and take care of Bolivia. I hear the presidente there wants to legalize coca tea, and, well, since thats against the UN Charter you can use the "Dubya Defense" (for invading Iraq and triggering WW3).

edit on 5-8-2018 by IgnoranceIsntBlisss because: (no reason given)

posted on Aug, 5 2018 @ 09:38 AM
link
Personally I would wager that this was something he and his people cooked up, the country is a train wreck and rapidly spiraling downward.

Great way to buy time is to arrange a weak attempt like this (kind of like Turkey Coup) and now he can use the "attempt" to drum up some more support to help fight against the dreaded CIA.

posted on Aug, 5 2018 @ 09:52 AM
link
a reply to: IgnoranceIsntBlisss
Oh come on, we all knew that the Venezuelan leaders would ruin regional stability, they were groomed by cuba!
It's not like he or the last one are doing g their people's any favors with the current state of affairs. Clearly they need a more enlightened path to follow, preferably one that benefits us, err I mean everyone in the area ...

In Venezuela usually in the cities that don't have gas lines the buildings have a central tank for the whole building. 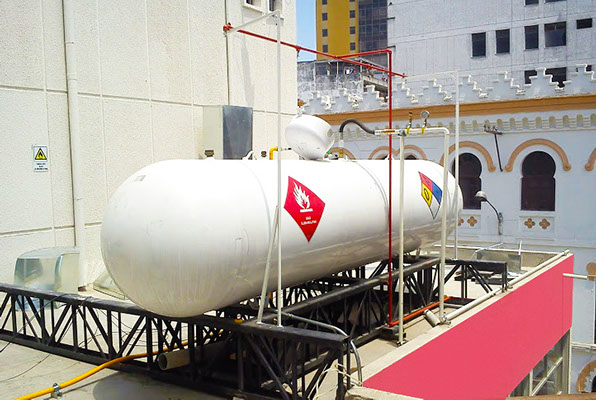 There you feel better now?

I've enjoyed all of your self-righteous tirades.

I don't think our drones would miss.

I also don't think they would be low enough to be hit by sniper fire.

Dji gets shot down over mide Eastern skies all the time trying to drop 40mm shells or so from 500 or so feet. Let's be serious, it is not subterfuge if you do it from 300 miles away with trackBle cruise missiles or ucav's . The evolution of mans wickedness is to make it look like people attack themselves and each other for humanitarian Intervention.

posted on Aug, 5 2018 @ 01:13 PM
link
Wonder if this was a fake assassination attempt done by the government for political points. Explosion seemed big enough where anyone with any skills at all should have gotten the drone close enough to the President. Just a thought.

posted on Aug, 5 2018 @ 01:21 PM
link
I wonder if it was a plane drone or a quadcopter. I agree with Woodcarver, you wouldn't have shot down a capable quadcopter like a DJI drone unless you knew which direction it was coming in and directed all eyes to look. They could have easily have flown undetected 1500 feet into the air, set the GPS way point coordinates to directly above were the President was and then free fall or rapidly descend straight down onto the crowd before exploding.

Wouldn't the C4 have to be wrapped in ball bearings or something to even be effective this way? It's an explosion, but isn't it the shrapnel that usually gets you?

I'm not buying the assassination attempt.

Probably just something to show their "effectiveness" on thwarting attempts.

posted on Aug, 5 2018 @ 02:40 PM
link
a reply to: TheLieWeLive
the blast gets the kills, the shrapnel gets the injuries. Just look at the video I posted man. They have been getting shot down for years now while dropping 40mm shells in the mid east. They are not the easiest to direct in free fall, so therefore they fly typically quite lower than 1500 or even 1000 feet. There is also the tactic of simply crashing them into your target with explosives, as Hezbollah has been doing since 2006. Israel liked the idea so much they dedicated a system for that very purpose.

Hasnt been enough war in South America. We need to get a million dying per decade down there, like we've caused in the Middle East. Then bitch about the "Deep State" that does that stuff, and the rest of the subversion here and abroad, acting all self-righteous acting like we deserve better when we condone them laying waste to tiny poor nations across the world. Like we hear in our ivory tower know whats best for everyone else. The very same attitude the "Deep State" uses against everyone including US when they hijack our media, education, finances, and so on. But hey just so long as the CIA goes and destabilizes the rest of the world we get to say see SEE look how craptastic everyone else and and how super cool we are in comparison, and thus we get to marvel in our magnificence it only costs millions of lives being killed and at least tens times more lives than that being ruined so we can pat ourselves on the back and claim to be the moral authorities in all of the known universe.

Because our meddling helps everywhere it goes, right?

Or can anyone even name one place it truly has, in their lifetime, how it has helped the people it supposedly was and didnt cost us here at home??

We condone the CIA killing leaders 'over there' (anywhere), and ruining millions of lives via subversion, and destroying millions of lives via proxy wars etc, and we deserve all of that here too. TO yearn for the CIA to do that BS is to BEG for everything we get here. And in case anyone hasnt noticed, they've brought a proxy war here and its been tearing our social fabric apart with brilliant efficiency.
edit on 5-8-2018 by IgnoranceIsntBlisss because: (no reason given)

You're operating under the assumption that the US is involved in this at all.

An accusation does not make something true. That government needs an all powerful symbol to demonize to distract people from the threat their own government poses to them.

They are starving, they are under totalitarian rule. But you think the US is responsible for everything.

To a man with a hammer, everything looks like a nail.

I always applaud/condone the death of despicable communist/socialist authoritarian tin-pot dictators. And I think our government has as well, offering to support a right-wing populist/military coup against the socialist scum.

Sadly this is a clearly a false flag, in order to justify Maduro's effort to further entrench himself in power. It isn't enough that the people of Venezuela are forced to get food with their "loyalty cards" or eat their pets (Maduro's suggestion). Or that power is off 90% of the day, or food/clean water/healthcare are nowhere to be found. Or that crime is rampant, or the socialist "authorities" are themselves committing crimes against the subjects (used to be Citizens....)

Maduro has actually gone so far as to rob the people of Venezuela of their gold reserves, and transferred it overseas (no doubt set aside for when he flees to avoid a public hanging)
edit on 8/5/2018 by JBurns because: (no reason given)

Since when is any assassination plot not involved with the CIA?

6 Latin American leaders who criticised US policies fall ill of cancer simultaneously
Russian Communist Party head Gennady Zyuganov today demanded an international investigation into the death of Venezuela’s Hugo Chavez, claiming it was “far from a coincidence” that six leaders of Latin-American countries who had criticized the U.S. simultaneously fell ill with cancer.

“How did it happen that six leaders of Latin American countries which had criticized US policies and tried to create an influential alliance in order to be independent and sovereign states, fell ill simultaneously with the same disease?” Zyuganov told Russian state television, urging an investigation under “international control” into Chavez’s death.

Zyuganov is accurate so far as his claim that six Latin-American leaders were diagnosed with cancer within a relatively close period of time, most notably Argentina’s President Cristina Fernández de Kirchner, who was diagnosed with thyroid cancer in December 2012, although later analysis proved that she had never actually suffered from the illness.

Current Brazilian President Dilma Rousseff, Paraguay’s Fernando Lugo, and the former Brazilian leader Luiz Inácio Lula da Silva, have all been hit with cancer in the last few years. In 2006 it was also reported that retired Cuban leader Fidel Castro was also diagnosed with cancer.

I've read a lot of cancer studies, and in that field there is a list of chemicals that lab workers use to induce cancer in labrats with stunning uniformity and precision.

But now that that angle is used up for a while, well the new thing is drones so hey lets hand off some C4 drones to some dissidents down there and away they'll go.

And we'll see it and say good riddance. Dweep down many will surmise it was the CIA, but hey, gotta get rid of tyrants eh? Too bad that's not why they do it, at least not for the good of the people there (which this BS rarely achieves VERY VERY RARELY), its about they cant be controlled and "we" (our elite masters) MUST control everyone and everything everywhere because they're control freak tyrants too. And when we support their BS we own it too because we're living vicariously through them.

But not me. I call out this BS whenever I see it, no matter who I see doing it, and if that makes me self-righteous, well somebody has to freaking do it so throw tomatoes and monkey turds today. Thank me tomorrow. Because I will never betray US.

Yeah because that worked so well during Operation CONDOR, right? Oh that's right none of them ever proved to be actual communists, it was all always just an excuse to to wreck snip. 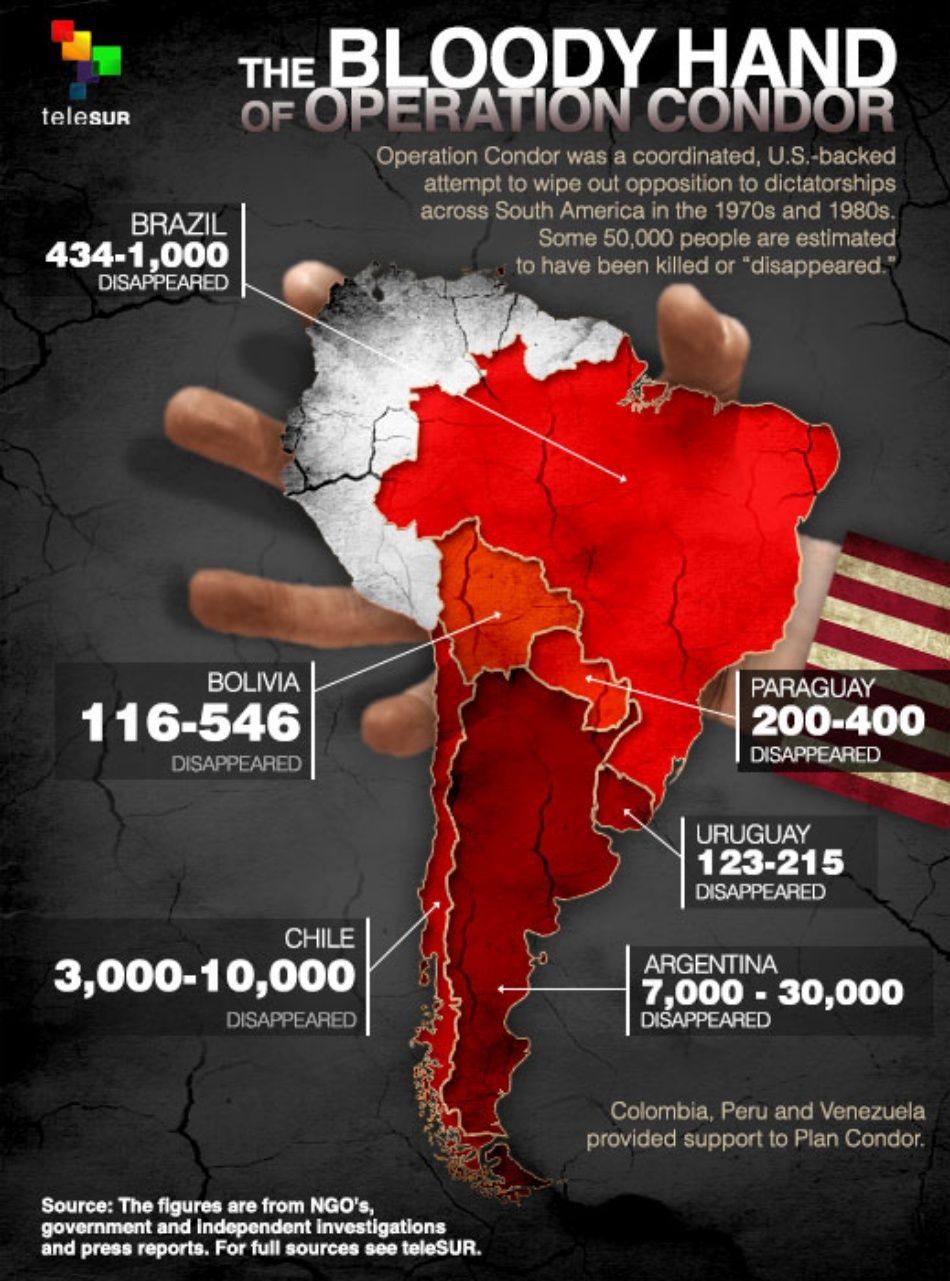 And those are lowball numbers:
en.wikipedia.org...

And I'll bet when we invaded Iraq you had a nearly identical argument to rationalize it, as prescribed to you by the Neocons and the "liberal" media. And when you saw Libya...