originally posted by: TerryMcGuire
a reply to: BlueJacket

shhhhhhh. Don't tell EVERYBODY for crying out loud. This is one of the best kept secrets and should remain that way. So point them all in other directions. mm, some where in say, Arizona, yeah, that's the ticket.

I have family and friends visiting me right now from Ashland. They love it there! I may move there too


Also Seattle and Portland areas of the Pacific northwest are supposedly well suited as well for that, though both are starting to see L.A. area type pricing in housing. Suburbs around them though are still obtainable for most.


Id also add Oregon, and Portland in general are super pro-small business, very easy to start up something here. Though watch Portlandia, Id say they undersell the weirdness...

DUDE!! That place sucks ASS! The entire state sucks ass, the people suck ass and everything is beyond horrible!!

Everyone hates it there and can't wait to get out...it's a freaking PRISON! Never, and I mean NEVER, go there!

It's horribly expensive, the taxes suck and warts grow on everything and every one!

Now SHUDDUP, would ya???

posted on Aug, 4 2018 @ 03:57 PM
link
Yoopers are only allowed to officially retire to Florida and Arizona. Everywhere else does not have Pasty shops.


I just shopped at Publix™ this a.m. they're running a special on Broccoli Florets 2 bags for $4.00..


I'd check out Montevideo, Uruguay. A 990 sq ft. apt in the Capitol city 2 blocks from the water is $68/month. The Government is also complicit in the Cannabis trade and when the SHTF, about the last place to get snip would be Uruguay..

Now if Bayer™ (nee: Monsanto™) get involved then I'll head to somewhere where the older folks aren't treated like snip, maybe India..


And don't waste the time about being "connected to family/friends" You don't actually talk to them now, most just send a "text" so why not go somewhere cheap that has the interweb?

I have to be warm now

posted on Aug, 4 2018 @ 05:40 PM
link
How about somewhere totally random? The wolrd is so much bigger then the USA. We have quite a few americans retire her in Lyme Regis Dorset (UK) very warm and dry climate here in the south west. They seem to like the beach life. Tbf Lyme regis seems to be full of retired people (we call it Gods waiting room) I'm young but it's great to see people living out their twilight years in comfort and friendly surroundings

For me anyway in years to come I like to think I will make enough money to explore more of the world. I don't see the draw of staying in one place. Equally though your idea of touring the USA sounds lovely. As we all know life is short. Seize the day and all that.

DUDE!! That place sucks ASS! The entire state sucks ass, the people suck ass and everything is beyond horrible!!

Everyone hates it there and can't wait to get out...it's a freaking PRISON! Never, and I mean NEVER, go there!

It's horribly expensive, the taxes suck and warts grow on everything and every one!

Now SHUDDUP, would ya???

Sorry. You're right. We only ever vacation there about yearly.

And it is terrible.


People poop in the streets and stuff.

well, sadly while in Portland OR couple weeks ago, there was actual street poopin! Walked outa Bread and ink like 38th and Hawthorn....boom, er I mean human boom boom, right there facing the door up against a Willamette Weekly box.

It doesn't surprise me.


Also Seattle and Portland areas of the Pacific northwest are supposedly well suited as well for that, though both are starting to see L.A. area type pricing in housing. Suburbs around them though are still obtainable for most.


Id also add Oregon, and Portland in general are super pro-small business, very easy to start up something here. Though watch Portlandia, Id say they undersell the weirdness...


Too many skeeters in Alaska. Beautiful state though.

Oh, the skeeters ain't the half of it!!

Just wait till you get into those biting flies!!

Them things will make a fella go crazy!

But you learn how to deal with all that stuff after a while, and there are tricks!


We used fly wipe like city folks use cologne.

That S# really works too! (but it has to be the Avon stuff, not one of the knock offs from the store).

ETA - Those bugs just laugh at 100% DEET and stuff like Deep woods Off. You'll see 'em all just rolling around on the ground cracking up when you wear that stuff! It's like..."NEWBY!!!...FRESH MEAT!!! BWAAAAHAHAHAHAHAHAHA!!!"
edit on 8/4/2018 by Flyingclaydisk because: (no reason given)

You know, I was in Michigan visiting my Mom before she passed a few years back and I came upon an Avon store, so I perked up and went inside. Never saw an actual brick and mortar Avon store before. Mom was asking me why the heck I, of all people, wanted to go into an Avon store! I told her I wanted to by some Skin so Soft. She looked at me like I had three heads!! LOL! I limped up my wrists jokingly and started sacheting around and said in a real feminine voice..."Because it smells really good, Mom!" She thought I was nuts, but she's had 50 years of me being nuts, so no surprise there.

Anyway, I go inside and tell this gal (who happens to be the owner) I want some Skin so Soft. She takes one look at me and says I don't want the creme I only want the oil, or this other new stuff they had. I asked her why I didn't want the creme and she says she can't tell me (seriously). She wasn't joking. I'm looking at her like..HUH? She says "I know what you want it for but we are legally prevented from talking about anything related to that subject...and that's all I can say.". WOW! Really????

Then she says I don't want the creme, I only want one of the oil products. THEN, she says Avon has this new product which can be used as a "bug repellant"...but, under her breath, she says it doesn't work as good, and puts two of the other product on the counter and points to one of them. Okay, I'll take that one. She tells me that's a good choice.

Apparently, Avon is under some kind of legal restriction from touting the SSS product as a bug repellant...which should tell you something about how good the real stuff really does work!


I've heard of Avon products before, but when you're wiping down your ponies, it's a lot easier just to wipe yourself down as well.

Good grief, you were riding horses up there??? That's gotta' be absolute murder!!

I tried to make my way through about 1/4 mile of that stuff and felt like I'd been on a 50 mile bushwhacking expedition! I think I 'tunneled' through it more than anything. That stuff has got to be about 10' tall! How the hell did you get through that stuff on horseback??? It's everywhere! 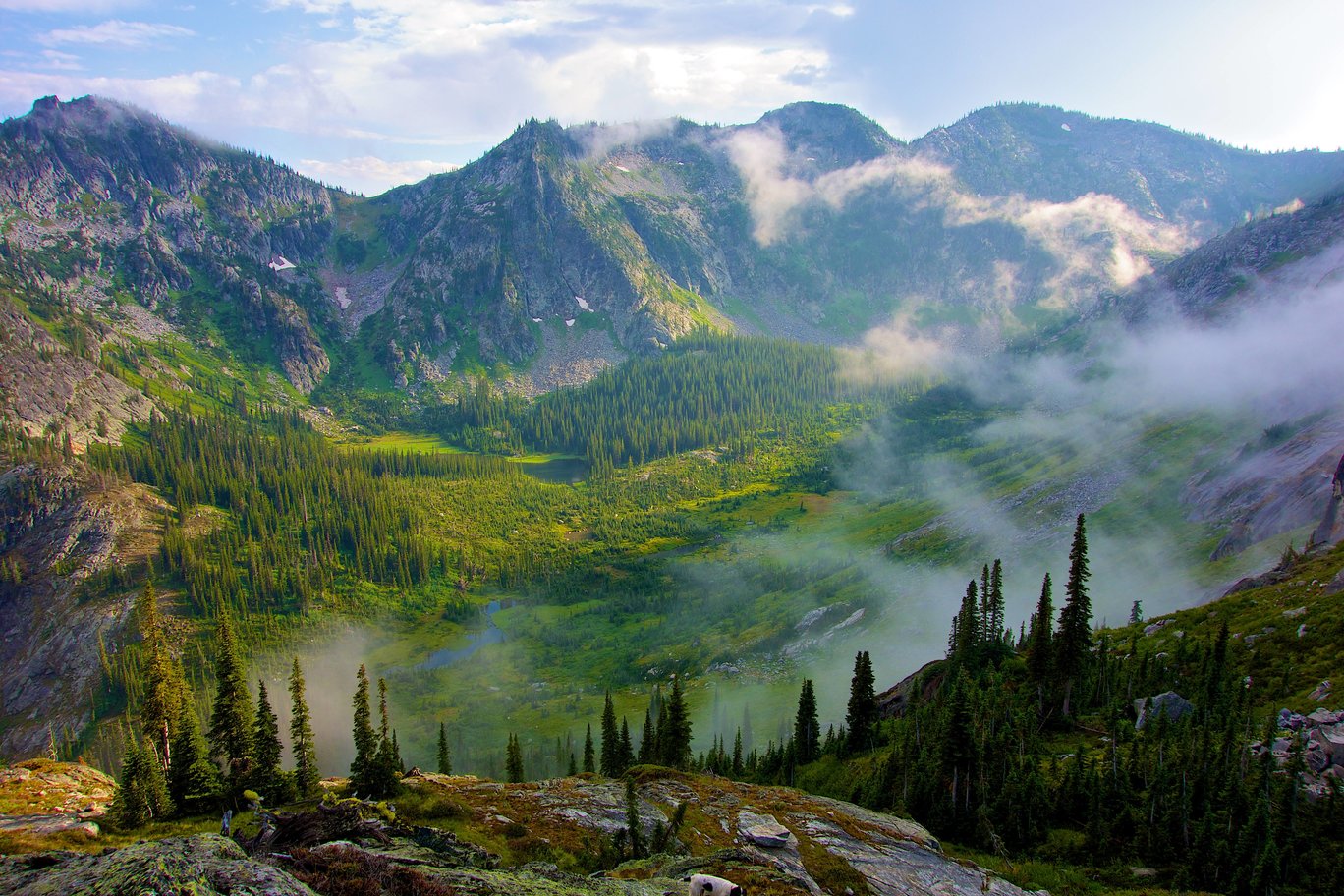 Damn, I'd love to wake up to that view everyday.

I was talking with my boss (wife) and we were discussing how we liked the pacific northwest, but the reality is that it is too far from family for us to realistically live there. She got called about a job in Seattle.

Anyway, the other point she always brings up is that she thinks there are a bunch of racist/skinhead/wannabe patriot types in the pacific northwest. Being black, I figure we'd stick out like a sore thumb in many rural areas, so the wife is paranoid. She tends to favor urban areas more so than I do.

Wow, sounds like Lubbock, Texas is the place for you. Culturally sophisticated, very affordable, beautiful scenic vistas as far as the eye can see.