The number of Americans who say “I can’t!” Has exploded

"I can't" is a offshoot of the victim mentality so prevalent in the US today. There are a million and one reasons one can find to avoid all sorts of things. If you can identify as a victim at some level you have a basis for " I can't" if you choose to live that way. The box you put yourself in with a bunch of "I can'ts"will just get smaller and smaller.." I can" or" I will try "is a road to broadening horizons.

It's a world of prosperity these days. The biggest problem is the hoarders at the top of the food chain.

Whether it be healthcare, wealth, education, food water... Anything. Not even difficult tasks these days but alas, we can't afford that!

All I see is victims, victims of tribe-like mentality and propaganda and victims of society.

It's sad really, makes people bitter. "Get yours" vs the "got ours" mentality.

Meanwhile the likes of Amazon are suffering record breaking profits whilst paying comparative pennies in tax.

I could go on but I won't bother, keep on keeping real CB328

originally posted by: bananashooter
I can’t own a house in Northern California where I live because they are 800,000, generations before me could on a basic factory workers salary. We are worked harder and rewarded less than ever. Maybe you could say you can, but I can’t.

That's a defeatist attitude. Move. I'm moving next year, but to a place where I can afford to buy a few acres of land and some dirt bikes and some horses and have the time of my life! Do the same.

originally posted by: GENERAL EYES
a reply to: HunkaHunka

I pushed myself to and beyond the mental breaking point working.

I'm an overachiever and it was mercilessly run into the ground by my employers.

Last job I had I almost attacked a customer.

I'm tending to my higher education online now, away from the public eye.

Until I make sure I won't crack from pressure you best be glad I'm not in the workforce.


Whenever someone has told me that I can't do something, I always took that as a challenge.

We used to be Americans.

Now we're a nation of American'ts.

originally posted by: GENERAL EYES
a reply to: carewemust

A lot of the younger generation have serious mental problems, and most employers aren't accomodating.

I blame overcrowding and the digital age.

Things have got worse in the IT/tech industry in the UK. The first thing I notice is that a lot of recruitment agents aren't much more than spiv's / spivettes and barrow boys only interested in shoehorning you into a bad fitting job in order to get that hiring bonus to buy a new car rather than any long term commitment to find a genuine match between your skills and an employers needs. They even go as far as to get their female staff to put fake avatars on their website and sweet-talk people into accepting those hellish jobs (*). On top of that they seem to get triggered to send phishing emails whenever private emails are sent from a home PC using a landline connection. Even when you don't have the skills required. Especially when it is rare skills that are no longer taught in universities.
(*) Finding yourself training up your foreign replacements, working with software that cannot be debugged. This can be micro-controllers or GUI scripting languages, or companies still using out-of-date technology from decades ago, an open-plan office with noisy cubicle neighbours.

Next, some employers think that "recruiting bright graduates is like trapping wild animals". The director who said that actually ended up emigrating to Hong Kong. Employers will think nothing of kicking a promised project down the road by six months, then when you finally do get to that time, they decided to give it to someone else. Tell them that a particular task needs to be done in order A, B, and C, they will decide to put A aside for the moment, make B the priority for you, then have a contractor work on C. By the time those two are complete, you now need to rewrite everything because they didn't factor the requirements for A. Then when that is fixed with a workaround, only then do they tell you that D needs to be done, which now requires a complete rewrite because that needs everything to be put in the back-end levels rather than GUI. When try and do that expect some idiots behind you to squeeze a rubber toy behind your back the minute you sit still. At the same time your project manager is giving you grief because you can't keep to your estimates because of the goofballs with the rubber toys. Some companies won't even give out references if you decide to leave.

The only way out is to become a freelancer/contractor/software consultant where companies come to you and not the other way round.

originally posted by: TXRabbit
My middle school shop teacher (yes...they did have shop class back then) would chew your ass out if you said "I can't". He'd go on a tirade which is now understood about how that phrase was basically saying "I choose not to".

Yes...he was missing 1.5 fingers, before anyone asks

I guess it is just the part of the country toy live in.

originally posted by: skunkape23
"Can't never could."
It is a word I very rarely use.

Like in I can't understand how stupid and lazy people are...lol

originally posted by: HunkaHunka
Have you noticed how many Americans say I can’t instead of “can-do!”

The Seabee motto has always been “can-do”. They are the Naval group you call in to tackle, and achieve the hard stuff.

Every major group is touting the “I can’t” motto. InCels identify with it and affirm it... Migtow, same thing. Every Millennial I talk to is convinced by stats instead of manifest destiny.

I, along with my contemporaries, came up in a generation where boomers told us “You can’t!” And We said “watch me” and subsequently did.

But now everyone wants to act like society owes them something... be it a job, or a pronoun.

Harden the F up America... learn to survive as humans have, against all odds, for thousands of years.

originally posted by: bananashooter
I can’t own a house in Northern California where I live because they are 800,000, generations before me could on a basic factory workers salary. We are worked harder and rewarded less than ever. Maybe you could say you can, but I can’t.

That's because people are making poor financial decisions. They buy houses at these inflated rates, which pushes every other house even higher. Then, they have zero intention of ever paying the house off, they get an interest only loan in which they build zero equity. So on that $800,000 home, they get a loan for 1.05 million and only pay on the $250,000 interest over a now 40 year mortgage, resulting in a payment of $521/month that never goes up and leverages inflation over time. Home ownership has essentially become double speak for renting. 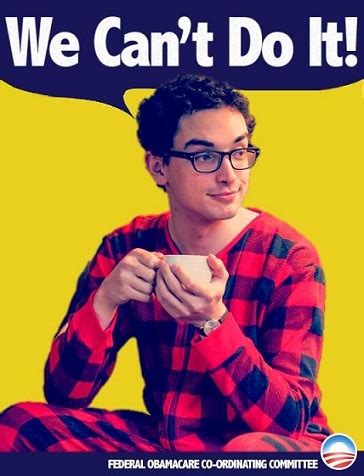 Your picture makes no sense. One of Obama's big slogans was "Yes we can".

It's a play on Obama and yes we can.

Remember a little thing called the ACA or Obamacare?

If you can provide food and shelter for yourself or the ones you care about, maybe it is time to let the rest of this go. If you can be self sufficient and reliant, maybe reaching for that extra dollar isn't a good thing.

Maybe instead of 'I can' or 'I can't' the situation should be fully investigated before going full gung-ho.

Maybe to really change this society, the I can'ts will play a huge role. If we go on struggling for bread crumbs, validating this system, will it ever get better?

originally posted by: ClovenSky
Maybe to really change this society, the I can'ts will play a huge role. If we go on struggling for bread crumbs, validating this system, will it ever get better?

Unless you can show you're successful, as something of a validation on your ideas, you will never gain the power to change the system.