Fascism is Progressivism sweetheart. Totalitarian authoritarianism is the end result of both. Socialism is just a path to get there.

It is the polar opposite of a Democratic Republic and an affront to our Constitution.

So paint the pig's lips any way you like, but it is still a pig.

It isn't welcome in America anymore and I am very happy that enough people are starting to realize that.

Your ideology, which has been a stain on America for over 100 years now, will be rooted out, branch and root until it is no longer on these shores.

What you are seeing right now in the Media is just the death throes.

Wall Street and the 1% do need to be kept in check. Too bad the Democrat Party is just as much in their pocket as the Republicans, always have been (regardless of lip service), but even worse its them funneling hundreds of millions of dollars at every SJW front out there (the Stereotypical Fascists that have been goosestepping since the Ruling Elites OG SJW Hatchetmen started their march initially to break up the Occupy Movement).

edit on 31-7-2018 by IgnoranceIsntBlisss because: (no reason given)


You mean FDR and Hitler. 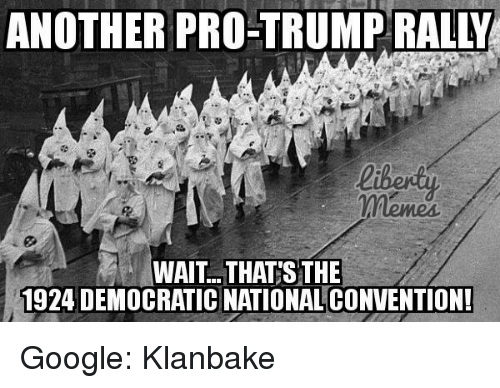 posted on Jul, 31 2018 @ 08:23 PM
link
That’s a whole lotta work there without once looking at how much it reflects the ideology of the left. The major difference in the two is the left as a whole is rallied against an evil force called Republicans. There are a couple of old hard right Republicans left in office, but not the President and not the majority of the Republican Party that voted him in. We don’t care who is marrying who, abortion battles are over except the hardliners on the Right and everyone on the left. The left seems to have it in for Russia, we don’t. I personally like Ron Paul’s view on staying out of other countries. Unless they blow up our buildings of course.

originally posted by: IgnoranceIsntBlisss
a reply to: CB328

Sorry, did you mean Antifa?


originally posted by: IgnoranceIsntBlisss
a reply to: CB328

Sorry, did you mean Antifa?

By now, as business power has been unleashed by its servants in the Republican Party, the traditional business attack on “the institutions and values of liberal democracy” has reached levels not seen since the Gilded Age, if even then.

How much money did Hillary get from corporate interests in the last election versus how much did Trump get?
If you don't think the Democrats exist to serve corporations the same as Republicans better check the math again.


originally posted by: IgnoranceIsntBlisss
a reply to: CB328


Sorry, did you mean Antifa?

Those are the Blackshirts.

"1) submission to legitimate authorities and 3) adherence to values and beliefs perceived as endorsed by followed leadership."
How do you rationalize the fact that the Right Wing has far more internal pariahs than the Left does? For example, John McCain... obviously some Republicans support him, but a large number of us view him as utterly detestable and are very vocal about that. Others falling in that category are Paul Ryan, Mitch McConnell, Bob Corker, Susan Collins, Lisa Murkowski, Jeff Flake, and former Speaker John Boehner. These are all Republicans who represent the party "leadership" and have for some time still been reviled and ridiculed by many Republicans. Also, if we're getting technical, a blind submission to authorities would seem to fly in the face of everything we've seen of many Republicans standing opposed to Obama, Clinton, Pelosi, the above mentioned list of Republicans, agencies like the TSA, the EPA, the BLM, etc.

"Powerful and Continuing Nationalism"
Well now, that's just a ridiculously patronizing continuation of the attack against patriotism that started with the goddamned hippies and their love affair with the non-American world in the 60s, isn't it?

"Disdain for the Recognition of Human Rights"
How about the Left's disdain for the recognition of the American Bill of Rights? It seems priorities are a bit muddled here. Republicans embrace the Bill of Rights while saying that we don't need foreign groups dictating human rights to us, as we've already enumerated what's important. The Left frequently embraces the foreign while pissing down the leg of the national... sovreignty matters.

"Identification of Enemies/Scapegoats as a Unifying Cause"
LMAO!!! Seriously? You're suggesting this differs from the Left's scapegoating of Bush, Trump, and Reagan or their naming them as enemies alongside identifying the NRA, TEA Party, nationalists, Oath Keepers, and more as "domestic terrorists" in what way, exactly?

"Supremacy of the Military"
This is simply a smart view of reality, friend. We've made many enemies over the years, some even through the stupidity of our own leadership (Democrat leadership at that!) The moment we lift our thumb off the hammer, we're screwed. Thus: we overfund the military. If it keeps me from seeing Americans forced to face Mecca once a day or from speaking Chinese, I say it's money well spent, ya?

"Controlled Mass Media"
ROFLOL!!!! Oh, that is RICH! 90% of the MSM is controlled by 6 multinationals, all 6 of which donated more to Democrat candidates over the past several cycles than to right wing candidates. NEXT!

"Obsession with National Security"
Well now, it is kinda a big deal, ya? Or do you enjoy being overrun with foreigners and terrorists?

"Corporate Power is Protected"
...and yet the DNC is the party of the billionares with Zuck, Gates, Allen, Buffett, 7 of the 10 wealthiest members of Congress Bezos, Soros, Bloomberg, Steyer... Might you be forgetting this fact?

"Labor Power is Suppressed"
Ah, the union issue. Well, since the unions went Democrat, the jobs went south, and the US manufacturing sector went in the can. The remaining unions are mostly public sector unions, so supporting that noise is a massive conflict of interest and essentially is the tax payer asking to be bent further over the barrel... not smart.

"Disdain for Intellectuals and the Arts"
To make this claim, we'd need to actually define what constitutes an intellectual and what "art" actually is. The present definition of both is vast enough to capture most liberals, who fancy themselves as deep thinkers while they sculpt nativity scenes out of dog crap and hemp shavings... in other words, common sense and beauty are rejected in favor of the radical and bizarre, which should be rejected by anyone with a frog hair split five ways worth of brains.

"Obsession with Crime and Punishment"
Again, live a while in one of America's urban hells and tell me crime isn't a major problem, largely because our punishments are weak and ineffective and the Left is providing criminals with a laundry basket full of excuses.

"Rampant Cronyism and Corruption and Fraudulent Elections"
Welcome to American politics, regardless the Right or Left side... our politicians suck and that's why we're draining the swamp.

I can't imagine being this heavily brainwashed to think this comparison is even remotely accurate.

I feel sorry for you. You've really lost your ability to think for yourself.

Yet I've assaulted no Jews, brainwashed no children, invaded no countries, saluted no Dear Leaders... There is no discernable difference between people who compare Trump Supporters to Hitler supporters and people who believe the Earth is flat.

Interesting the quote from Goebbels about National Socialism being a religion. Reminds me of the way some progressives will work against their own best interests if it means advancing progressivism. It's like their religion.

Yes, the SS was a religion complete with Aryan myths [ginned up quickly] a high temple, mysticism, ritual [also ginned up quickly] and symbols galore. Himmler was the high priest. I have an SS honor ring whose previous owner no longer needed it. It was liberated from his carcass by a relative who sent him to Nazi Valhalla in 1944. The deaths Head rings were issued only certain mythological dates and had the name of the recipient, the date, and H. Himmler engraved in it. The rings were returned to the high temple on the death of an SS member and there was a ceremony associated with the return until the Soviets were overrunning Germany and then all the returned rings were sealed in a cave somewhere.
The rings were 95% silver and 5% copper [for durability] as measured by me. [I was running an electron microscope at one time and needed an interesting target for EDAX so in it went.] Silver is a magical metal which is one of the reasons it was used.
Hitler read Helena Blavatsky's book The Secret Doctrine, the Synthesis of Science, Religion and Philosophy, originally published as two volumes in 1888. The first volume is named Cosmogenesis, the second Anthropogenesis. It was an influential example of the revival of interest in esoteric and occult ideas in the modern age, in particular because of its claim to reconcile ancient eastern wisdom with modern science. en.wikipedia.org...
This drove the Nazi engine and the swastika came about.


How much money did Hillary get from corporate interests in the last election versus how much did Trump get?

Yeah I've read some things about that over the years. There's quite a bit down that rabbit hole.

Hey dont be dissin Wall Street 1%er Banksters. That's what "liberals" do, and theyre evil for doing so, I thought it was?

You are hurting from the truth and you are feeling the pain I see.

Again, accept the result of the democratic election.

posted on Jul, 31 2018 @ 08:45 PM
link
I am a little confused as this theory could describe both sides of the political spectrum. I don't believe it to be an accurate description of either side as this is a Republic based upon Democratic values. Neither side despite politic rhetoric would ever support an authoritarian government and the checks and balances we have in place would prevent one.