20 states take aim at 3D gun company, sue to get files off the Internet

Twenty states announced Monday that they plan to ask a federal judge in Seattle to immediately issue a temporary restraining order against Defense Distributed, a Texas-based group that has already begun making 3D-printer gun files available on its DEFCAD website after a recent legal settlement with the US State Department.

Five years ago, Defense Distributed created and published 3D CAD files on the Internet for several weapons that can be printed on a 3D printer. However, the US government was having none of that. The State Department sent them a letter telling them they were not in compliance with ITAR. The ITAR is a government regulation that controls exporting military or defense technology.

They removed the files from their website and started the appeal process. However, by that time the files had been downloaded thousands of times and were now available in Torrent files. Defense Distributed reached a settlement with the government in April of this year and began making the files available again within the last few days.

Now 20 states have gotten together and are seeking a restraining order to keep Defense Distributed from publishing the files. In an earlier attempt by the company to voluntarily comply with a Pennsylvania suit, they blocked all IP addresses from that state. Unfortunately Defense Distributed is now becoming involved in more legal action and has preemptively sued the City of Los Angeles and State of New Jersey, asserting their First Amendment rights.

In many ways, this lawsuit is somewhat symbolic. All of the technical information is already available. However, I believe that this is a case that really needs to go before the Supreme Court to get a ruling as to the applicability of the First and Second Amendments of the Constitution. I strongly believe that the SCOTUS will rule in favor of Defense Distributed. Which should then set a legal precedent prohibiting Congress from enacting legislation that will attempt to erode those Constitutional rights.

When we have discussed gun control topics here on ATS, one issue almost always arises: 3D printing of firearms. The CAD files are already widely available on the Internet. So, any properly equipped and knowledgeable person could manufacture a simple handgun like the Liberator. I believe that as the technology becomes more advanced it will eventually be possible to manufacture just about any firearm imaginable. 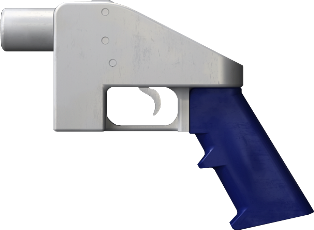 So, my ATS cousins, what say you?

Gotta stop the freaking out. I bet the Clintons already have 10 printers running 24-7 to keep up with their demand.

posted on Jul, 31 2018 @ 06:09 AM
link
I'm ok with letting people have 3d printed firearms. It was going to happen inevitably. Even the US military is funding a project to 3d print their own surplus of weaponry. Instead of trying to ban the idea, let everyone do it and just give law enforcement more lethal capabilities to stay ahead of the curb. Just thinking off the top of my head, this will not be an easy win for the states and neither for the company selling the schematics. A very grey area because of the technology involved is so new and innovative, what will it come down to?

I'm fine with the idea of people being able to 3d print their own stuff. No more lethal that what professional gun makers have on the market now.
edit on 31-7-2018 by WarPig1939 because: (no reason given)

posted on Jul, 31 2018 @ 06:20 AM
link
I'm so torn on these issues but in the end I think it should be available. I have the prints. I grabbed them way back when. I have not looked at them and have no interest in printing any.

Sure I'm not the only one.

Small arms manufacturers like Remington will never allow this. The Second Amendment is about their unfettered right to make money by selling firearms, not your right to self defense.

How the eff do you figure ?

American firearm companies didn't exist at the time of the writing of the second.

Probably for more sophisticated weapons that require a special type of plastic to make the high pressure sections of the firearm.

I can imagine the government placing certain limits on the availability of that raw material. If not outward limits, I bet ATF will still be looking at anyone that buys a lot of the stuff. Like the way law enforcement keeps tabs on anyone who buys a lot of high nitrate fertilizer.

Next step is for the dems robgo all racist/police state, and want to track every 3-d printer. They will spin it as for the kids and put some ‘iam’ Or ‘ist’ against anyone who disagrees

Instead of trying to ban the idea, let everyone do it and just give law enforcement more lethal capabilities to stay ahead of the curb.

A very grey area because of the technology involved is so new and innovative, what will it come down to?

We're creating so much new technology in such a short time, that we're facing a constantly shifting paradigm in every aspect of our lives. It's nearly impossible to stay in front of it.

Giving all sides access to this is not actually making it fair or safeguarding the right to bare arm's that the American's so faithfully protect.
Instead it is simply making anarchy more likely, gun's that can be disguised as kid's toy's, made metal detector invisible etc are nothing new and there is or was even a Swiss company which produced a ceramic weapon designed for body guard OR assassin concealment and of course that is only the commercial weapon's.

It is however FAR too late to not let the cat out of the bag, even at the ISP level this will always be somewhere on the net and those whom know what to look for will find it just like the anarchist cookbook.

Even nations like mine Britain with our anti terrorism legislation and holding ISP's to account while trying to block these from our available internet can not stop these thing's and in fact all the legislation and attempt's to block it all is merely to create a few more hoops to jump through that those whom are intent upon finding this can then most likely find some way to circumvent.

I personally would NEVER allow this to get out into the world but my opinion is purely academic and if not his it was destined to be invented and released somewhere by someone.

At least in this case it is NOT infallible as it still requires standard ammunition unlike that aforementioned compressed gas ceramic gun but how long before someone reverse engineer's that and makes online compressed gas weapon's, not long I would wager.

Sad subject and sad for the world, I do hope that student know's that he has blood on his hand's for what he did, of course if not him it would merely have been someone else.

Human's excel at two thing's, good and evil, this is actually evil.

Owning a gun for self defense is NOT evil, no more than owning a sword but without licensing, registration and making an untraceable weapon you can print off in your own home that can then be used for criminal activity's, is not registered or licensed well that is just asking for trouble.

originally posted by: Alien Abduct
a reply to: DexterRiley


I'm not sure about those individual states, but it is legal at the Federal level. Provided the private citizen does not sell the weapons to others.

IF there are laws in the individual states that prohibit citizens from making their own firearms, then there definitely has to be a SCOTUS ruling or Federal legislation. It's not going to be possible to effectively block each state based on their particular laws.

originally posted by: DexterRiley
a reply to: WarPig1939

I would hope I'm wrong though. Law enforcement have enough weapons to supply an army as it is.


It is however FAR too late

Since the invention of the cnc mill.

posted on Jul, 31 2018 @ 06:48 AM
link
A lot of fuss over a single shot plastic gun and years after the plans were distributed too.
Talk about trying to slam the gate shut after the horse has bolted. There'll be no mass shootings with these things and any reasonably skilled tradesman could make something sturdier in his shed anyway.


As part of their federal settlement, Defense Distributed's legal fees were paid by the US government. Only about $40,000 dollars. Of course the government spent a 100 times that much prosecuting the case.

It is not illegal to make your own firearm for your own personal use (not to sell) provided it is in compliance with existing gun laws (not fully automatic, short barrel rifle, etc). Therefore 20 states can go pound sand.

I have looked at the designs of several 3D plastic printed guns and really they pretty much all encompass single shot zip guns in their design and function. There is an exception, but that is neither here nor there. Most importantly, all plastic 3D printed guns have one other feature, too bulky to be concealed. So again, 20 states can go pound sand.

If the real worry is that felons can print these off without anyone’s knowledge, then that is a somewhat valid concern. How about the 300+ million manufactured guns that the felons can acquire without anyone’s knowledge? An illegal possession is just that. And I would rather felons had single shot, limited lifespan, unconcealed, short range plastic guns than a legitimate firearm. So 20 states, visit the beach and pound some more sand.

As a side note, a 3D printed metal 1911 has been made and looks the same as any other 1911, using the same springs and magazines. Very expensive and time consuming to make, but it has been done. And plastic 3D printed rounds have been made and shoved into brass cartridge casings. So far no one has done a fully 3D printed round that I know of successfully and consistently. I have a couple ideas on it but don’t want melted plastic in my barrels.