My party is better than your party

posted on Jul, 30 2018 @ 01:55 PM
link
Come on guys and girls lets stop this mouse wheel of insanity that we have been on for so long , where we never hold our own party accountable and always blame the other side.

Over looking your own parties inexcusable acts because the other side does it or did it is not logical . Two wrongs don't make a right.

I really can't imagine anyone being proud of their party within the last 4 decades.

I would like to get this thread going to see what we can do to get back our gov't from corporate and lobbyist control. I would like for the thread to avoid blaming the other side for anything and focus on what common ground we all agree on and perhaps join forces to better OUR nation for EVERYONE.

I will go ahead and start.

I honestly believe that as long as we don't make gov't conflict of interest priority number 1 nothing will get fixed.
You can't expect a group of people that are riddled with conflict of interest to do right by you. I also think this should be the priority of everyone on every side of the political spectrum.

1. why can't republicans , democrats, and others join forces on this likely common goal to make this priority number 1?

2. How can we go about it to make it priority number 1.

4, Suggestion on how to break out of this cycle of the lesser evil and same issues never getting fixed?

posted on Jul, 30 2018 @ 02:05 PM
link
Donald Trump is the peoples way of bridging the divide. He is not a conservative and not liberal that's why he is despised by so many in both parties. Politicians have not got it yet that the glory days of unfethered reign are over. The people will fix what they have messed up for so may years. Why were the trade deals bad because these politicians wrote them for lobbyist and self interest. 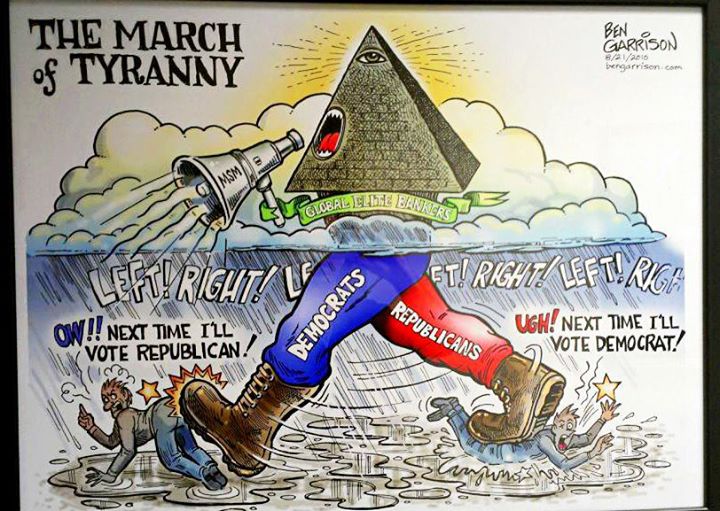 good thread.
in an effort to spark initial thoughts, i think you should elaborate on conflict of interest and perhaps issue an example.

this is a very vague and broad topic. what facets of conflicts of interest are you trying to shed light on?

eta: i also presume the discussion youre trying to enflane ahould be done with words instead of political memes
edit on 30-7-2018 by odzeandennz because: (no reason given)

The easiest and simplest way to get our house in order is to constitute a solid coalition with the only priority being to put new people into every elected office within our government.

This can be done by voting out every one who is holding an elected office for at least four consecutive election cycles. Each member of the House of Representatives has to be re-elected every two years. A U S Senator holds office for six years but only one from each state is up for election at a time and only one third of the total is up for re-election every two years. The President is elected for a four year term and can only serve two terms. With a little calculation, it can be found that after three cycles all of the congress will be replaced and the fourth time is to drive home the point that THEY WORK FOR US.
Of course, many will say the real power lies in the much over sized bureaucracy which is really there to handle to day to day details of government. Once they are shown they can be replaced. then changes will come.

It will not matter which political party has their members in office, once they remember how easily it is to be FIRED most things should start going more in the way the people want them to go.
edit on 30-7-2018 by tinymind because: (no reason given)

1. Since we are a representative republic, it's hard to force our representatives to do anything that goes against their own personal gain.

Please see Number One above as to why numbers two through four will never happen.

As for the best party, judging by Hillary's response, it was this one:

originally posted by: IncessantOptimist
a reply to: interupt42

First we the people have to agree that congress and senate all live by the rules and benefits we do . No special retirement and healthcare . keep voting them out of office until they agree .

Go to town hall meetings, email, call and snail mail our representatives, Sign online petitions and so on. Most of us do none of them.

Then Vote. Even if it's just for third party candidates or write ins. Especially in local elections, every vote counts. I won an election by 6 votes one time. But especially on Ballot questions. That's what's led to legalization in most states. It's not our representatives doing anything.

Let's then push for term limits.

Lastly turn off the news. All political shows or one sides, every single one of them. When someone who claims to be an expert or a journalist or a talk show host only tells you one side of the story that's how you know their lying. Everyone on MSNBC, Talk Radio, Huff post, Brietbart, Fox news. They're all lying to you. Turn them off.

Then just think about it, why is politics the only thing where we don't work together. In every other facet of life it doesn't matter what your political ideology is. I was in the army, I trained with republicans and democrats. It never came up. my last 20 jobs....no one said. "your a liberal, I can't wash dishes with you" LOL

That's only in the make believe world of ATS, News Media, and politicians does it matter. Wake up.

Here's an easy example to tell you if your brainwashed or not.

LOL Science isn't political. You only believe as you do, because you're brainwashed.

I was going to say my party was definitely better I can prove it by how hungover I was but your party sounds much better. Invite me next time please! These political parties are no fun at all.

Sorry, I did not vote for Obama. Not once! trump is the biggest liar to ever grace the White House. Today Rudy is saying collusion is not a crime.

If the trump camp did collude, and trump has been lying about it this whole time, he needs to step down. Lying for almost a year and a half, calling everything Fake News, when it is indeed the truth, is NOT OKAY!

I vote for, who I feel is the right choice. I knew trump stunk, long before he was running for POTUS.

It makes me sick, to watch him lie, over and over.

I still know what he did last Summit!

Forgive me but, if Hillary had been elected, I doubt you guys would see fit to have this kumbaya moment. Sucks being on defense all the time.

Oh well. The answer for me is NO. I like ridiculing Trump. He makes it so easy. And if you don't like it, too bad. Maybe you should have thought of that when you guys wouldn't, and still won't, let up on Obama and Hillary.

And finally, stop being snowflakes. Remember how many times that was said to the liberals on ATS.

Stop your whining. This is what it is, and Republicans and Trump can thank themselves for it.

posted on Jul, 30 2018 @ 04:03 PM
link
I was hoping you were talking about a real party, not politics. Anyway, anyone that tries to take away our individual liberty is an enemy and that can be either political party. Freedom and personal liberty are the only party that matters to me.

posted on Jul, 30 2018 @ 04:15 PM
link
Many members define themselves by their hate for those they oppose. Sad, really really sad, believe me!

Politics is ruining everything.

Nicely said. I would give you 10 stars if I could! This has been my perspective on our political system for a very long time. We've actually created to some extent two football teams with citizens taking sides to support them. How can anyone expect these two sides to negotiate legislation in good faith? These representative and most of the people who support them act like children blaming each other and ignoring their wrongs. Congress was created for both sides to work together in good faith for the benefit of the American people, not for their team (political party)! It's why we have gridlock and have a do nothing congress.

-I've always suggested to do away with the two-party system and let candidates run on the issues not according to a party platform. No party labels, period.

-Remove the money from campaigns. Our election system should have businesses donating "equal amounts" of media time and traveling expenses for all candidates. Incumbents would no-longer have a campaign advantage due to the "equal amounts" allowed for each candidate. Since these donations directly support our country's election system, these expenses would be granted a 100% tax write-off for these businesses. All businesses would be required to participate.

-There should be a national website established where citizens can compare the candidates views on issues side by side.

-Make it illegal for any outside campaign donations and influences.

-A two-year term limit for representatives should be enacted. Career politicians only increases influences and power among newly-elected officials. No representative should have more influence over another. The longer representatives are in office, there's a larger tendency for corruption.

-Representative salaries and benefits should be in line with the national average. This should be a temporary job for people who have a desire to help improve the lives of the American people with new ideas. It shouldn't be a stepping stone for a life long career for wealth and benefits. A majority of these representatives can't relate to the average American due to their high salaries and above average health benefits. If their salaries were more in-line with the majority of Americans, they would be listening to the voice of the people instead of the elite and corporate influences.

-All Supreme court Judges should be elected directly by the people not assigned by presidents. There's too much bias and personal beliefs that come into play when presidents select Supreme Court Judges.

-American's should also elect a citizens national watch-dog group to force elected officials to be honest and keep them focused on the issues facing the American people.

-Some aspects of the constitution should be amended to make sure the president and other government officials are not above the law and govern with American values. Presidential pardons should be eliminated. How many of us can pardon a family member, relative or friend facing criminal prosecutions? It clearly makes the President above the law. Impeachment should also encompass ideas and beliefs that conflict with our constitution and basic values.


Unfortunately, violent threats from Democrats against Republicans are GROWING.

They need to cut it out.