**BREAKING** MH370: “The possibility of intervention by a third party cannot be excluded.” 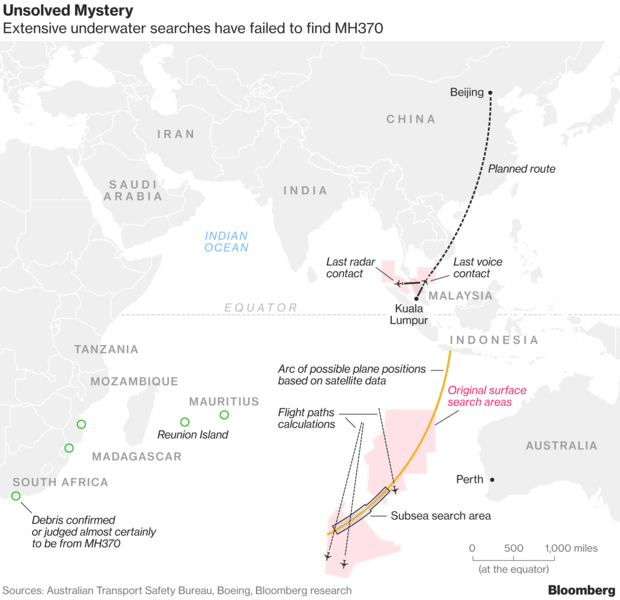 Monday’s 449-page report offered little to solve modern aviation’s biggest mystery -- and stopped short of apportioning specific blame. There’s nothing to suggest the plane was evading radar, or evidence of behavioral changes in the crew, it said. Significant parts of the aircraft’s power system, including the autopilot function, were probably working throughout the flight, the report said.

“We are unable to determine with any certainty the reasons that the aircraft diverted from its filed planned route,” Kok Soo Chon, chief inspector of the MH370 investigation team, told reporters in Putrajaya, outside Kuala Lumpur. “The possibility of intervention by a third party cannot be excluded.”

Without the help of cockpit data recorders, search teams could only guess what happened in the flight’s final moments. Analysis by the Australian government suggested MH370 ran out of fuel before plummeting -- at as much as 25,000 feet a minute -- into the water. Other investigators speculated that a person was at the controls until the very end, gliding the plane into the ocean beyond the furthest limit of any search area.

Monday’s report didn’t support either theory explicitly, but struggled to come up with a mechanical explanation for the aircraft’s deviations.


Bloomberg
lets look at the options:

Ran out of fuel?
A person was at the controls until the very end?
Possible intervention by 3rd party?

Was it coincidence that 3 months later MH17 was shot down? I've always thought that, with the benefit of hindsight about MH17, the possibility that MH370 was also shot down should not be ruled out. Very little came out of the offshore search & rescue exercise, and that's assuming they were looking in the right place(s).

Anyway, without the flight data recorders, '3rd party intervention' could mean anything from 'missile' to 'ufo' and anything in between!!

What say you ATS? Any thoughts on the '3rd party intervention' thingy?
edit on 30/7/2018 by Sublimecraft because: added link

I think the wording has more to do with the fact they can't rule what the cause was, so nothing can be ruled out.

I don't know why anyone would want to shoot it down, though it's been forever since I've read up on this case.

Any way hackers could do something like this?
edit on 30-7-2018 by CriticalStinker because: (no reason given)

Someone must have turned off the transponders else the plane's approximate last location would have been able to be determined.

Who other than the pilots could have done such a thing or could it be done via 3rd party hacking seems to be a valid question?
edit on 30-7-2018 by andy06shake because: (no reason given)

posted on Jul, 30 2018 @ 08:54 AM
link
My thoughts are as follows:
Someone wanted something that was on the plane.
A team of undercover commandos were on board. They quickly over powered the flight crew. Turned off the radios and transponders. Flew the plane to an undisclosed location like Diego Garcia. There was a report of the plane flying low over the Seychelles.
Who or whatever was taken from the plane then it was disposed of along with whe rest of the passengers and crew.
Sounds cold hearted doesn’t it. Air piracy is a cold business.

I still believe that evidence found of flight simulations that the pilot was playing with tells us the most of what possibly happened...

"The police did find, however, a single piece of evidence pointing at Shah. In his home they found a hard drive that contained a flight simulation program as well as data points created when he saved simulated flights. Five data points recorded on February 2, 2014, were of particular interest. It looked like they came from a single 777 flight that went up the Malacca Strait, passed the tip of Sumatra, then turned south and wound up with zero fuel over the remote southern Indian Ocean. This route so uncannily resembled the flight path deduced from MH370’s radar track and then satcom symbols that it was taken by many as smoking-gun evidence that Shah had practiced absconding with the plane. Some even believe that the flight-sim files could offer clues as to where to find the plane. (Indeed, the discovery of the flight sim files was one of the reasons that the authorities shifted the surface search area in mid-April 2014.)"

If it had been shot down at least some pieces of wreckage should have been found by now , the dispersal area would be quite wide. 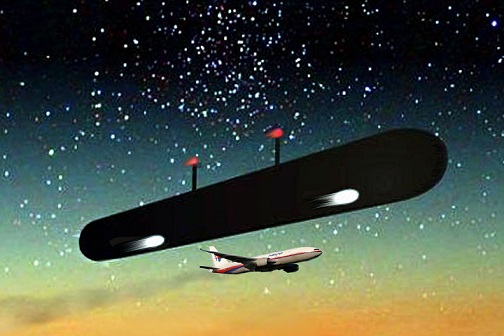 And an electrical failure will shut those transponders down pretty damn quick.

The problem is that pretty much the entire government at the time has been charged with massive corruption. There's a lot about them "finding" those simulator files that stinks to high heaven when looked at in that light.

posted on Jul, 30 2018 @ 11:21 AM
link
We'll likely never know exactly what happened with MH370, but at least the Rothschild's got a windfall from the tragedy, in the form of a valuable patent as a result of the other patent holders' death on the flight.

Good to know a technology worth potentially billions is in safe hands.

Except they didn't. The actual patent appears to simply be a way to optimize computer chips. This is from the patent-

The men in question (who don't show up on the manifest btw) were the inventors. The patent was already assigned to Freescale.
edit on 7/30/2018 by Zaphod58 because: (no reason given)

originally posted by: Zaphod58
a reply to: gortex

Can we have a link for that

It's not a huge debris field, but debris includes numbered parts from the wings andtail area, cabin interior segments that are consistent with Malaysian cabin layouts, down to random bits, such as a Rolls Royce tag consistent with what's found on their engines.
edit on 7/30/2018 by Zaphod58 because: (no reason given)

posted on Jul, 30 2018 @ 12:17 PM
link
I'd take any report delivered by Malaysian investigators with a very large grain of salt.

MH370 caught in swamp of corruption.

Both transponders, is there no backup psu/battery backup for any of the two?

If that's the case would not such an electrical failure bring down the plane?


I wonder what the chances are that the flight was commandeered electronically? If they can hack into a Toyota and take control, can they do the same with a modern airliner that is always in touch with satellites?

According to Fox News' report, the technology exists to do exactly this.

He said investigators couldn't find any flaws with the plane and dismissed the theory that it was remotely controlled. Boeing has such technology to foil plane hijacking but hasn't used it on any commercial planes, he added.

posted on Jul, 30 2018 @ 03:24 PM
link
I kinda wonder if this is a regular flight path for this airline? I mean let's say your a flight crew/copilot that regularly flies from LAX to NYC. You take off LAX, jet out over the water, do a 180 and head to NYC. You are over land the whole time.

From the looks of the flight path That aircraft would have been over land the majority of its flight, once it reached the coast which may be farther than it looks on the map.

Now would not the flight crew/co pilot realize that they are not heading in the right direction? and throw up some alarm? even the passengers may have taken that flight before and would realize they were going the wrong way.

That doesn't give any explanation as to what happened to the flight, but how many calls where made from flight 93 on 9/11? how long were they in the air?

If there were a major electronics malfunction would that disable the ability for cell phone calls from the plane? If cell phones require an aircrafts electronics then its a moot point...IDK if they do but there is somebody here that probably does....phones have compass'. and would not an aircraft have an old fashioned compass somewhere on board?

No, it wouldn't. There's a turbine that drops from under the tail in the event of electrical failure. It provides enough power for flight controls, and basic instruments. That does not include transponder.

Ah, the Boeing Uninterruptible Autopilot. The gift that keeps on giving.