Ancient cache of Kabbalistic scrolls and Artifacts Discovered in Syria

page: 1
60
<<   2  3 >>
log in
join
share:
Madrusa
+19 more
posted on Jul, 30 2018 @ 06:10 AM
link
Currently there are a number of scrolls and artifacts discovered in Syria being sold on the Black Market and seized on by authorities in Turkey when attempting to get them across the border, primarily these appear to be Jewish kabbalistc scrolls but there are also Christian works among them, most are gold leaf on gazelle hide scrolls contained within scroll holders and magical boxes. 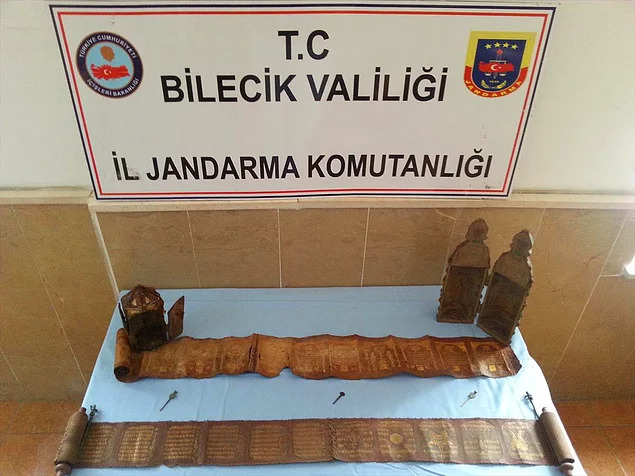 The only evidence i've found as to were they're coming from is this video were an entrance into an ancient crypt is seen complete with Roman sarcophagus and artifacts seen in a state of neglect; 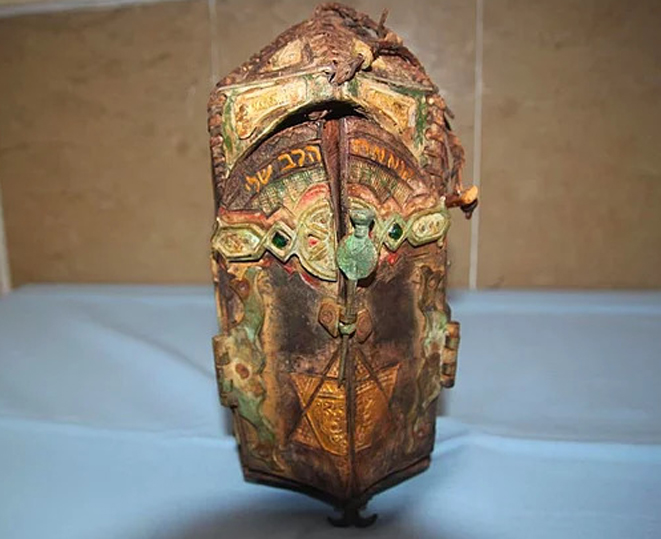 Some estimates put the date of the finds at around 2,000 years old some at around 700 and of course it will vary, here's a lead sealed book that would appear to be from the late classical period and based in Mesopotamian/NW Semitic tradition.

The Kabbalistc scrolls include representation of the inverted Pentagram and horned goat which is kind of interesting; 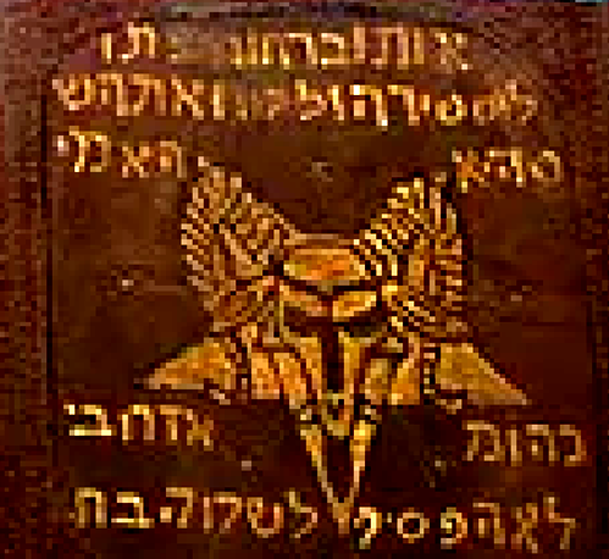 There are also owls holding what appear to be keys and horned bulls and scorpions in the iconography of the scrolls. 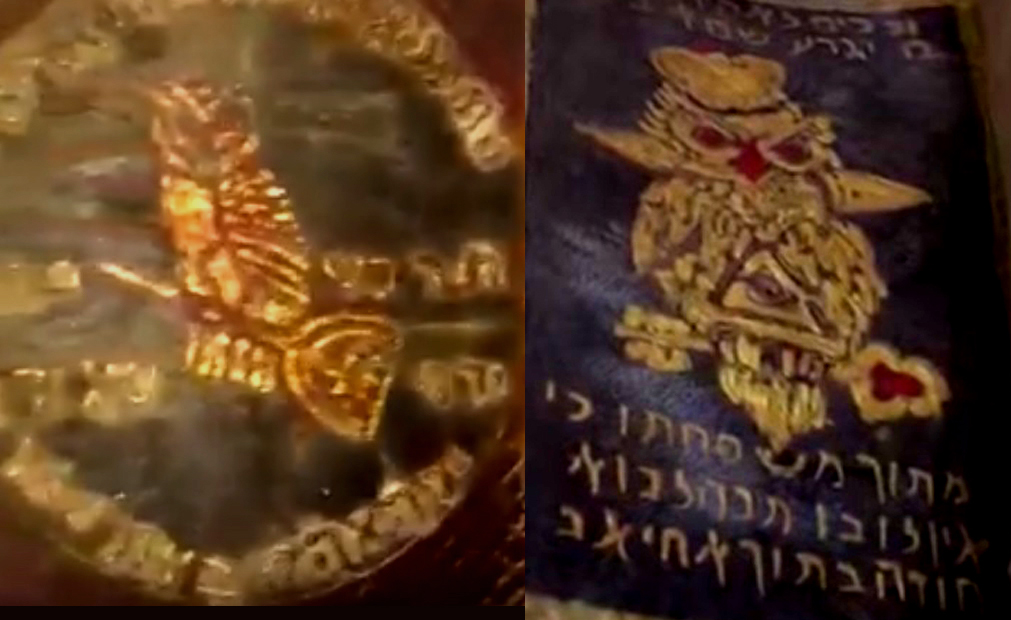 The All Seeing Eye is also found in connection to the Hexagram and the owl. 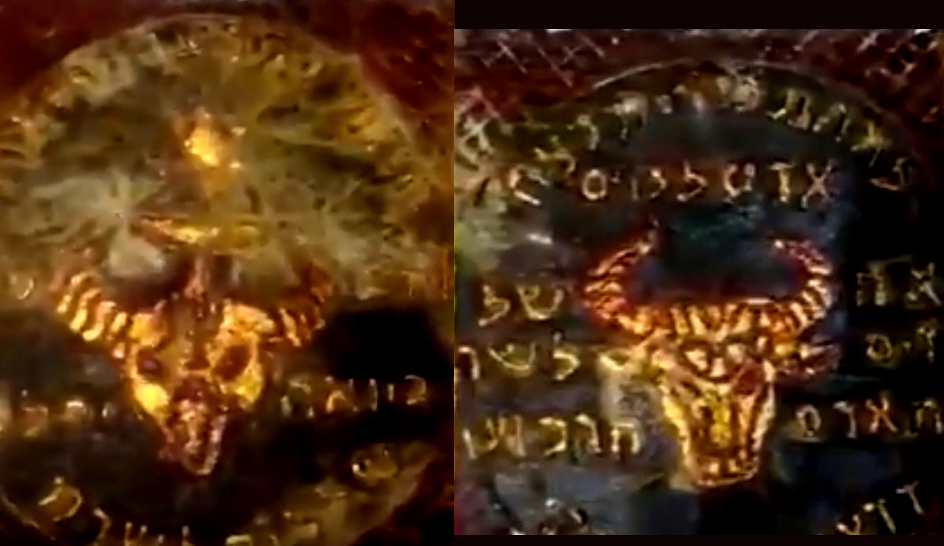 These images from the Magical boxes containing small books.

There's also a remarkable work in hide of the deposition of Christ;

For the most part though the finds seem to be of magical boxes and scrolls.

posted on Jul, 30 2018 @ 06:21 AM
link
Have the scrolls been interpreted? Of what language?? They don't appear to be older than the Dead Sea scrolls. They certainly don't appear Christian in nature.
edit on 30-7-2018 by Justso because: (no reason given)

There's a lot to see and not normally the sort of thing you would get to see if they hadn't advertised their discovered treasures on Youtube...

Like i said the dates will vary, there are Christian books i've seen examples of, for example here a not great quality Kabbalistic book and a Christian book, the Jewish artifacts are in Hebrew for the most part, what they all have in common is they're of hide.

posted on Jul, 30 2018 @ 06:44 AM
link
Very interesting stuff there. It looks like there are varying ages of stuff that were discovered. I wonder who was in the sarcophagus?

I was sort of considering whether it was a sarcophagus or Bacchic altar, it would make sense if all this related to a weird Bacchic cult within an underground crypt and their stash of mystical works.

I'm wondering now what January 18th 2018 means.. Or was it just the date that they found excavated and documented the item in question.
edit on 30-7-2018 by BotheLumberJack because: (no reason given)

You read the date on the scroll...?

Or maybe you just refer to a video date...?

I just watched the vid.

Fun fact, the symbol seen on the bottom of this scroll container is the Sumerian sign for DINGIR, a Divinity.

originally posted by: Justso
Have the scrolls been interpreted? Of what language?? They don't appear to be older than the Dead Sea scrolls. They certainly don't appear Christian in nature.

It’s in Hebrew, which is read from right to left.

This is extraordinary. Makes you wonder what else has been smuggled out of Syria that wasn’t seized the authorities.

Does anybody remember that episode of What On Earth where they compared satellite images of the Sahara near Cairo? They showed the terrain before and after the Arab Spring in 2011. The weird part was that in the after images there was clear evidence of tons of illegal excavation (grave robbing) that had apparently taken place right under everyone’s noses while the riots were taking place. We’re talking holes in the desert big enough to be seen from space and even some reports of unmarked freight trucks seen hauling something out of the desert being escorted by what appeared to be military guards.

None of this has even been reported in Western media, just the isolated Turkish report of seizing scrolls at the border crossing.

posted on Jul, 30 2018 @ 08:28 AM
link
Here's a very nice example of a Christian book on hide, interestingly they share the same plant/tree of life motif as the Jewish works.

And another Christian work that illustrates the tree of life and the serpent.

posted on Jul, 30 2018 @ 08:33 AM
link
Lots of Mesopotamian iconography in there! Interesting. I would so love to see scholars date and interpret this stuff. Even if these date the same as the Dead Sea Scrollls, it still gives us more information and insight into the context and thought of the people living in Christ's day.

But I fear these will disappear into oblivion.


What is the religious significance of the owl? Aren't owls in d ok me pictures we have seen from Antarctica?

It is interesting because when the kabbala is first thought to have arrived in France circa the 13th century that's on a hide parchment scroll in Aramaic, generally considered to have sourced to Babylon, but these given that many could be around that date suggest to me that Syria could be the more likely place of origin, and that one see's here the same original source.

The owl in this context;


“May the ukuku, the bird of depression, make its nest in your gateways, established for the Land!,” and “The bird of destroyed cities . . . . . . a nest. The sleep-bird, bird of heart’s sorrow.” In ancient Syria, the owl is found recorded in the eighth-century treaty in the Aramaic inscription from Seﬁre, in which the owl serves as an emblem of desolation.

In the Hittite myth of Elkunirsha and Athi or Asertu, Ishtar becomes an owl in the hand of Elkunirsha (El-creator-of-the-earth). Their cousins, the Trojans called the owl deity by the name of Ate, who then later became identified as the Greek Goddess known as Athena

They were also understood as conveyors of souls, intermediaries between the spirit world, considered a bad omen because they could indicate someone was about to die, particularly in the case of infants.
edit on 30-7-2018 by Madrusa because: (no reason given)

posted on Jul, 30 2018 @ 09:05 AM
link
That lead book in the third video down looks Sumerian in origin. That looks like Enki with his four wings behind him (as often depicted). The design of the face and beard is also very typical of Sumerian design. The orbs on the cover represent planets. The back even has cuneiform writing. That is an amazing find. I haven’t even finished watching the vid I got so excited. Lol. I wonder where it is now?

On the reverse above the human figure is clearly a depiction of the winged-disk surrounded by a sort of covering swirl design. There's no way that's not Sumerian. That video is from August 2017. What happened to this stuff?

Either it's an amazing fake or it's an incredible find, considering it's made of metal. And there's paper inside? There's no guarantee that the inside of that book has anything to do with the outside (people often removed pages/insides of good book covers like that). How it got mixed up in all that Kabbalah stuff, who knows. That cover has nothing to do with anything Jewish and predates it by many thousands of years.

Translating some of the comments on the YouTube page people seem to think its a fake created by a museum to make money. There are some unscrupulous people out there, so its possible. I haven't been able to find any other mention anywhere on the web about it (yet).
edit on 7302018 by oriondc because: (no reason given)