A Brief Overview Of Colorism.

posted on Jul, 27 2018 @ 03:15 AM
link
This thread is a spin off of a conversation about colorism in a another thread called
what is 'white privilege'? Nobdy seems to want to explain
www.abovetopsecret.com...

So how old is Colorism or shadism, who started and and why..well the answer to that seemingly easy to answer question is actually quite complex as humanity itself.

Let's go back to old Africa itself, the variety of people is in the old continent is huge, from the shortest to the tallest ,from thick muscled folks to very slender folks, from wide features to narrow featured folks, from some of the blackest folks in the world to some relatively lite-skinned folks and every shade and phenotype between any extreme, they often share the same space and intermingled, but human behavior being what it is, often sought to compartmentalized and point out peculiarities and exploit them if needs be, in this lays part of the origins of colorism.

Africans have always divided them selves into two groups based on color, the Red and the Black , thus we have the Red and Black IBO's of Nigeria, the Red Fulani vs the Black Housa , the red Khoisan vs the Black Bantus, this Tuareg vs Black Mandinka ,this is repeated almost universally across Africa from ancient times, a casual traveller may not see any such differences ,but the locals may view the same differences in the same way as Blonds vs Burnetts in a European world view, but to an African, just a bunch of white ppl.
To be cont.
edit on 27-7-2018 by Spider879 because: (no reason given)

Among the earliest historical evidence for colorism came from African writing about the subject themselves. In the Kebra Nagast or Book of Kings.

Through the might of the Lord of All I took the field against the Noba [Nubians] when the people of Noba revolted, when they boasted and "He will not cross over the Takkaze," said the Noba, when they did violence to the peoples Mangurto and Hasa and Barya, and the  Black Noba waged war on the  Red Noba  and a second and a third time broke their oath and without consideration slew their neighbors and plundered our envoys and messengers whom I had sent to interrogate them, robbing them of their possessions and seizing their lances. When I sent again and they did not hear me, and reviled me, and made off, I took the field against them. And I armed myself with the power of the Lord of the Land and fought on the Takkaze at the ford of Kemakle.
cas.stetson.edu...
.


Other forms of it shows up in Dahomean conquest art. 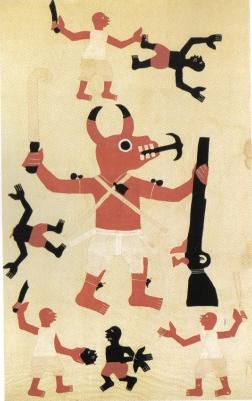 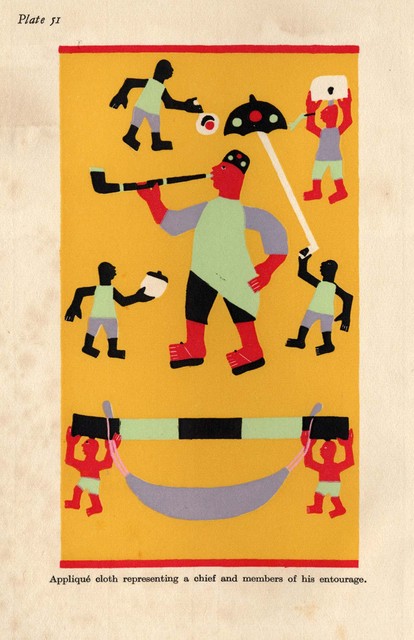 As can be seen they the Dahomeans looked at themselves as Red men vs their Yoruba opponents.
To be cont.
edit on 27-7-2018 by Spider879 because: (no reason given)

originally posted by: eletheia
a reply to: Spider879

Will get back to that later, especially on how it shift depending on who is on top of the society at the time.
Be out for some hrs hold tight.

posted on Jul, 27 2018 @ 06:33 AM
link
More on the shadism from the Kebra Naghast.
Although this is purely Ethiopian ethno myth, of the queen of Sheba and her relationship with Solomon king of Is real, the daughter of the pharaoh one of the many royal wives of the king, had this to say about the Queen of Sheba and her displacing her as Solomon's new favorite side chick.


And she answered and said unto him, "Thy son hath carried away thy Lady Zion, thy son whom thou hast begotten, who springeth from an alien people into which God hath not commanded you to marry, that is to say, from an Ethiopian woman, who is not of thy colour, and is not akin to thy country, and who is, moreover, black." And Solomon answered and said unto her, "Though thou speakest thus art thou not thyself of [that race] concerning which God hath not commanded us that we should take wives from it? And thy kin is her kin, for ye are all the children of Ham.
www.sacred-texts.com...


So Solomon clapped back at her for literally calling the kettle Black.
edit on 27-7-2018 by Spider879 because: (no reason given)

originally posted by: chelsdh
a reply to: Spider879


Thank you, but reading the Kebra Nagast, is like watching, Pulp Fiction the movie, there isn't a straight path to it, it often turned back on itself and is disjointed,, the closest literary work like this that Ive read, is the Thousand and one Arabian Nights.
edit on 27-7-2018 by Spider879 because: (no reason given)

posted on Jul, 27 2018 @ 02:38 PM
link
There was a similar out look in near by Arabia among the primitive Arabs just before the rise of Islam, about Black vs Red ,but in this case Red came to mean " white" or at least north Mesopotamian types before they became much like them in looks.

We discovered that it was these Arabian people who in fact first divided peoples into blacks and whites (“reds”) in their literature and proudly looked on themselves as “the blacks”, likely due to their being surrounded by Syrian and Persian people that had a very different appearance and origin

Al-Dhahabi said to be called “ahmar” or “red”, “in the speech of the people from the Hijaz, means fair-complexioned and this color is rare amongst the Arabs. This is the meaning of the saying ‘…(He was) a red man as if he is one of the slaves.” Al-Dhahabi, Siyar alām al-nubalā 2:168 (Beirut: Risāla Establishment, 1992)
afroasiatics.blogspot.com...


Now the above would change rapidly as more lite-skinned folks would gain prominence in both numbers and influence changing that world view of the Arabs both Black and Red, for with the introduction of more and more slaves from Africa, "Black" the complexion would be equated with slavery, thus would be lost ,the idea of Black primacy,

Concerning India, at least by Marco Polo's reckoning, the ideal complexion of especially south Indian was Black at least during his era.


The children that are born here are black enough, but the blacker they be the more they are thought of; wherefore from the day of their birth their parents do rub them every week with oil of sesame, so that they become as black as devils. Moreover, they make their gods black and their devils white, and the images of their saints they do paint black all over.
en.m.wikisource.org...


Fast Fwd to today where lite-skin and bleaching agents is all the craze, in India , something happened between then and now.

posted on Jul, 27 2018 @ 03:01 PM
link
On to the new world, it is quite certain that, the color
dichotomy was carried over from the old world, as modern day AAs and Caribbean folks used almost the same color codes, thus we have Detroit Red, aka Malcolm X, Redd Fox and a multitude of other Reds, Black also have been noted, many folks have been nick named too Black, or midnight etc, Red and Black IBO's was still a thing in Jamaica as it was in old Africa, the extreme negative to all this is exacerbated by colorism of slavery imposed from the put side, and the divisions based on duties, such as the field hand and the house Negroes although not necessarily all the time, but can wreak havoc on a community if left to chance.