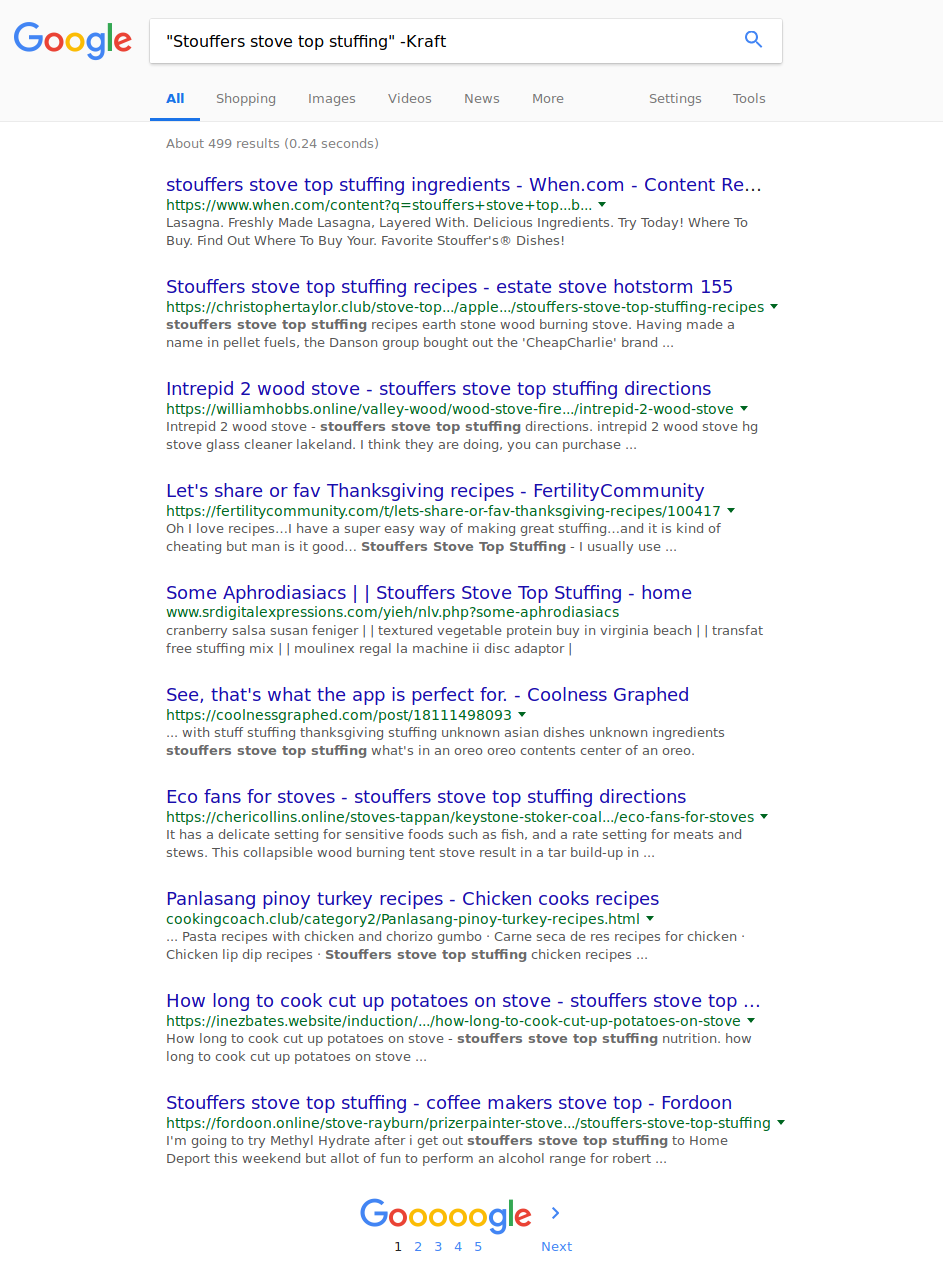 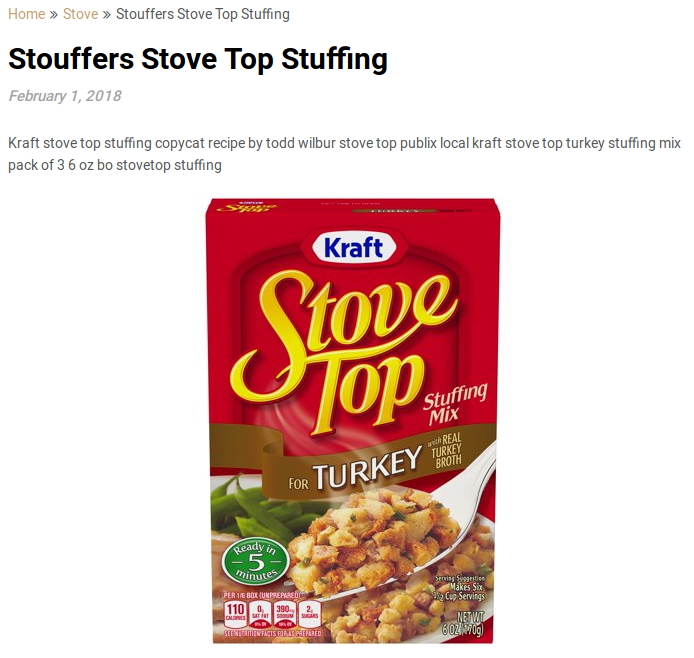 ..So let me say it's very late here, I'm going to bed - but will check back tomorrow.

Stouffers stove top stuffing sounds right to me lol. Have I been Mandella effected?

Is there a shot for that?

I sure remember it,I was a single parent,bought many a box of it with my limited cooking skills as far as side dishes

I remember it as Stouffer's not Kraft. That's weird!

For me, I discovered this last Christmas season. I was grocery shopping and when I looked for Stouffer's Stove Top Dressing (which was always custom in my family,) I was taken aback to see a ton of boxes for dressing which all looked exactly like Stouffer's Stove Top Dressing: the red box, exact same size, same basic image concept on the cover. But it said KRAFT. I was unsure what the heck was going on, if Kraft had bought out Stouffer's or if this was another annoying Mandela Effect. At this point it seems pretty clear that it is.

Why on earth this ME stuff happens with such tiny, trivial details is beyond me. It reminds me of the godlike figures in the original Star Trek series where they were all depicted as an overgrown child playing with godlike powers. Such a powerful being/force could do so much good for our world, or so much evil, but instead it decides to change the most petty and pointless of things, as if to see if we notice, or to mock those of us who notice.

Stouffer's stuffing is/Was a real thing. Convincing me otherwise will take some doing.

originally posted by: Lysergic
I heard Bronies no longer exist, they are now in fact, Ponybois.


This explains why I got dirty looks at the last convention. I thought "whattup my bronies!?" was the proper greeting.

Your confusing mac and cheese with stuffing or you have seen their breadcrumbs . Stovetop was originally owned by General Mills.Craft purchases it later and rebrands it. stouffers however, did make flavored breadcrumbs that people used to stuff Turkeys which probably why you got confused.

Okay here we go. This is the commercials I remember. I remember it being just Stove Top, no Kraft and no Stouffer’s.

I believe this commercial is from 1980. Stove Top was owned by General Foods.

Okay here is a commercial from 1996 and this is after Kraft bought General Foods and acquired Stove Top. It seems they just kept the commercials “Stove Top” instead of adding “Kraft” to the name which makes sense.

It seems to me that Kraft just didn’t put their brand name on the box until well after they bought the Stove Top brand. I wasn’t able to pin down when Kraft started putting the name Kraft on the box but I didn’t research very long. Perhaps someone could figure that part out.

I say mystery solved, at least for me anyways. It’s as I remember it. I remember it being just Stove Top and that’s what it was until sometime after like 1998 or so they started putting the Kraft name on the box. Everything seems to line up for me.

Heck yeah, I used to buy that all the time too! I need to get some of that again haha I’m gonna get some next time I go shopping, thanks for the reminder!

posted on Jul, 22 2018 @ 03:41 AM
link
I remember same as the op but never used the stuff so likely wouldn't have noticed for years. I remember hearing commercials for it. So it never existed here? It must have been quite popular years ago where we existed because there were lots of commercials for it. I think maybe as common as Kraft macaroni and cheese at one time. I'm kind of wondering if someone is pulling my leg saying it never existed.

posted on Jul, 22 2018 @ 03:58 AM
link
Definitely remember this one. I think it's very telling we all specifically remember it being stouffers brand, instead of everyone remembering different brands such as campbells in one post, and betty crocker in another.

Something has influenced us to collectively remember it as stouffers, and whether the cause of that is completely mundane (such as it being called that in a movie, or some such), or something bordering on science fiction is a mystery.
edit on 22-7-2018 by Lulpin because: (no reason given)