page: 1
17
<<   2 >>
log in
join
share:
shawmanfromny
+4 more
posted on Jul, 21 2018 @ 06:01 AM
link
Maybe I'm naive and "out of touch," but this is the most ridiculous thing I've ever heard of. As a 57 year old parent of a 22 year old daughter and a 18 year old son, who's gay, I've always believed that children learn, partly by nature and partly by nurture. Their identities are forged in a loving, accepting and open environment, as well as the discovery and curiosity, of their own body parts. It's up to parents to create an open and safe environment, that protects their child's innocence, while allowing their children to develop a positive acceptance of their genitals. That didn't prevent my son to like the color pink, or prevent him from playing with his sister's dolls and clothes. My wife and I never forced him to play with gender specific toys...he played with whatever made him happy, but he still knew he was a boy. When he finally came out last year, I was content in knowing that he was raised in a loving environment, that allowed him to be comfortable in choosing his own sexual identity. My wife and I, never raised our children without a gender designation, yet they both had no issues in choosing their own sexual orientation.

Is Zyler a boy or a girl? How about Kadyn? That’s a question their parents, Nate and Julia Sharpe, say only the twins can decide. The Cambridge, Mass., couple represent a small group of parents raising “theybies” — children being brought up without gender designation from birth.

“We read about how from when they're 20-week fetuses, they're already starting to be gendered, and people are calling the little girls ‘princesses,’ and buying certain things for different children,” Julia said. “We wanted to prevent that, so that's how it started. And then about a couple weeks before they were born, Nate just said, ‘What if we didn't tell people ever?’”

That’s not always easy, or comfortable, in a gendered world. Family, friends and day care workers struggle with they/them pronouns, and not everyone understands the Sharpes’ decision to keep the children’s sex private

The Sharpes believe Kadyn and Zyler will know their gender preferences by the time they reach elementary school. No matter how they identify or what pronouns they prefer, their parents are ready to embrace their wishes.

Aren't these parents complicating their children's natural development, by raising them to believe that a penis can be associated with a girl, or a vagina can be associated with a boy? With parents not raising children based on their sex, wouldn't this add to a child's confusion, living in a society that's based in a gender binary? Wouldn't this contribute with a child being considered an outcast by their peers? Will this become the new norm...to raise a child with gender neutral pronouns (‘they,’ ‘them,’ or ‘their'), so they won't develop a gender dysphoria? How exactly does this explain all the happy, self assured straight and gay adults, who were raised by parents, who didn't keep their biological sex a secret?

All I can say is there are some weird people in this world. Unfortunately they will pass their weirdness on to there kids.

Kids are not mentally equipped to make such a decision.

What if I want to be a thetan?

posted on Jul, 21 2018 @ 06:21 AM
link
Sadly, this is not a joke. The hang-ups of the parents impressed on their children. I would love to see a proper study of the impact on the future mental health of people where their parents have treated them as "nothings".

I have yet, to this day, seen anyone sit down and decide what sex they will be attracted to. I believe it's not a choice. You are what you are.

That has nothing to do with whom you choose to have sex with. And shouldn't.

I have no problem with a man or woman changing their outward look from boy to girl/girl to boy. That is their choice and none of my business.

I don't agree with parents muddying the water before a kid even has a chance to be a kid. Most of this has to do with stereotypes for girls and boys as it relates to their gender. Not their gender itself. For example, boys play football, girls play with dolls. Those are sterotypes and not gender issues.

I also believe these parents may be screwing up their kids. Why does a kid even need to deal with gender issues? Why can't they just be kids?

Well, I think parents are (overall) doing a horrible job these days but I don't see any real harm in letting kids have some choice for their future. I mean, that is actually a positive step in the right direction if anything.

I mean there are so many things that parents are doing wrong, this isn't even on the radar.

posted on Jul, 21 2018 @ 06:49 AM
link
Waking up to the trainwreak in yellow would be Hell. To spend quality time and invest it in Her would be brutal. For Starters, she's a purveyor of insanity..... on purpose, and should be nowhere around children with her dysfunctional life.

This is the fruits of the social engineered chaos that can be traced not only to chemical warfare (endocrine disrupting chemicals) and fraudulent social science attempting to be forced upon the population through psychological warfare, but also parroted throughout various Operation Mockinbird outlets sowing discord in all ways possible.

Science is science, nature is nature, procreation is an important aspect of society and it is beyond absurd that this is the direction that people are attempting to go.

In truth this amounts to child abuse and will continue to lead to very real consequences and sadly these parents shall be responsible for the inevitable suicides. 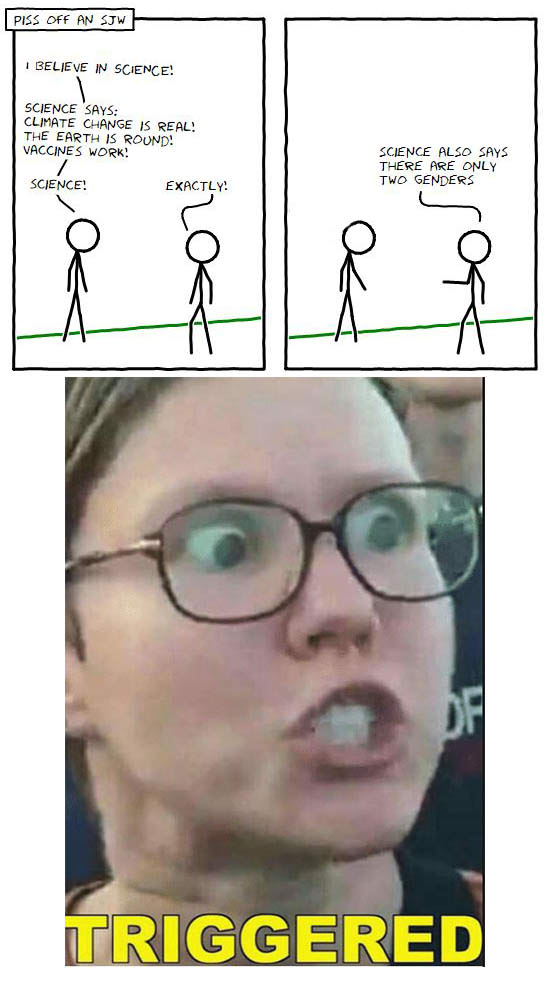 I have. I have known numerous lesbians that got tired of men and chose to date women. It was a choice by their own words.

posted on Jul, 21 2018 @ 07:45 AM
link
Gender is not a choice. You are either a male or female and no amount of hormones, therapy, genetic manipulation will change what you are born with.

These parents that allow this are mentally incapable of raising children and should be barred from doing so due to the impending psychological harm they are involuntarily causing their offspring.

That is my opinion however on the second statement regarding the topic at hand.
edit on 21-7-2018 by WarPig1939 because: (no reason given)

posted on Jul, 21 2018 @ 08:38 AM
link
Dumb people raising/making even dumber people and so it goes until we are no longer even human

This may well be how the planet of the apes arises.

This seems like nothing more than virtue signaling by the parents. They want to show how neatly they fit into the new sjw world order. Males have penises, females have vaginas. It’s really not that difficult of a concept.

Lets talk about he parents.... When deciding to have creatures did one say to the other...let me stick my vagina in your penis....I think not.

Is Zyler a boy or a girl? How about Kadyn? That’s a question their parents, Nate and Julia Sharpe, say only the twins can decide. The Cambridge, Mass., couple represent a small group of parents raising “theybies” — children being brought up without gender designation from birth

This is how we become the Grey, and all end up living a Stargate Sg-1 one episode.