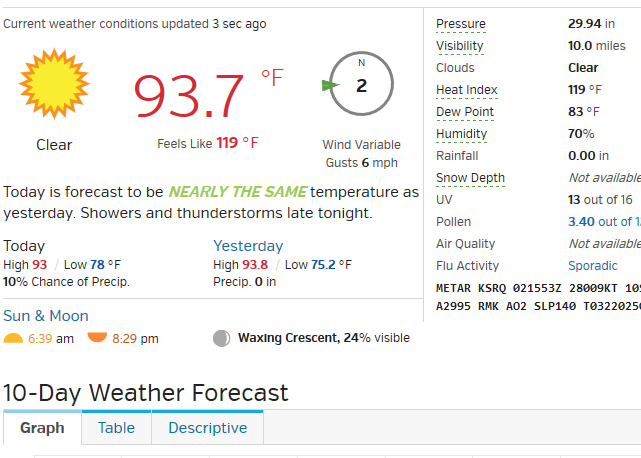 It's been hot like that before in FL, many, many times. I remember being....12 or 13, and one very boring summer day home alone, deciding to go to my best friend's house 3 blocks over and 2 blocks up on my bike. I got 2 blocks over before I was completely overwhelmed by the heat, which if I recall correctly, was a good clip over 100* (37*C) (hell if I know what the humidity, dew point & Heat Index were, but it was brutally HOT)
I decided to forgo hanging out and went back home, turned the shower on Cold, laid down in the tub & legitimately passed out for a while. Hindsight being what it is, I'm pretty sure I was pushing Heat Stroke territory.

A few years after the above screen grab I took, I had to get my errands done on foot, and it was just as hot as the readings on that puppy. I ended up laying down on the sidewalk for a while because I was feeling horrible, heat exhaustion sets in very fast in conditions like that. You think you have plenty of water and are dressed well enough for the weather, but you can never stay ahead of it too long, it gets you.

Kicker is, not a single driver bothered to stop, and I was on a very busy street. People just...kept going. It's moderately amusing, I slip on ice & do the splits on a sidewalk in MI, and half the state comes running, "You ok??" Down in FL, the heat gets you on a public street and nobody gives a s#, lol.
I barely had the strength to drag myself into a nearby fire station a few blocks away. Turns out, people were dropping like flies that day and I wasn't the only one to practically crawl in the door.

Haha that actually is so cool
The harbour the steps are at is now a marina with posh boats and artisan bars etc. Really nice there.

All I can say for Florida's summer heat is that July is the worst time of year to visit it (August isn't much better...) It gets so unbearable in the dead of summer. Obviously, there's worse places around the world to sweat to death in, but people from other states or countries who go to places like Disney in Orlando or Busch Gardens in Tampa this time of year almost always end up expressing shock at how miserably hot & humid it is. It's like the state's little secret, "Shh! Don't tell the tourists they're walking through the gates of Hell, they have money!"

If you're from one of the cooler northern states, this is excellent comfortable touristy weather, and if you're used to the chill of the Great Lakes or similar, the Gulf is usually in the mid/upper 60's, too. I've swam in it in January, it's definitely cold by Floridian standards, but the beaches are far less crowded and the northerners who squeal in delight at that temp have great water conditions to frolic in.

Haha!
I only ever travel in winter to go somewhere warmer than miserable cold Britain.
I've never left the country in summer, it's nice here then lol, my son was in Tenerife a couple of weeks ago, I laughed that it was a heatwave here he should have saved his money for winter to escape our miserable season.

I like mountains but I'm definitely more an ocean person
It's the only place to be in hot weather!