US Government sloppiness in nuclear material transit another theft in transport

Two security experts from the Department of Energy's Idaho National Laboratory drove to San Antonio, Texas, in March 2017 with a sensitive mission: to retrieve dangerous nuclear materials from a nonprofit research lab there. Their task, according to documents and interviews, was to ensure that the radioactive materials did not fall into the wrong hands on the way back to Idaho, where the government maintains a stockpile of nuclear explosive materials for the military and others. To ensure they got the right items, the specialists from Idaho brought radiation detectors and small samples of dangerous materials to calibrate them: specifically, a plastic-covered disk of plutonium, a material that can be used to fuel nuclear weapons, and another of cesium, a highly radioactive isotope that could potentially be used in a so-called "dirty" radioactive bomb. But when they stopped at a Marriott hotel just off Highway 410, in a high-crime neighborhood filled with temp agencies and ranch homes, they left those sensors on the back seat of their rented Ford Expedition. When they awoke the next morning, the window had been smashed and the special valises holding these sensors and nuclear materials had vanished.

This is not the first time something of this nature has happened. The government also doesn't typically disclose of incidents of this nature.

More than a year later, state and federal officials don't know where the plutonium – one of the most valuable and dangerous substances on earth – is. Nor has the cesium been recovered. No public announcement of the March 21 incident has been made by either the San Antonio police or by the FBI, which the police consulted by telephone. When asked, officials at the lab and in San Antonio declined to say exactly how much plutonium and cesium were missing. But Idaho lab spokeswoman Sarah Neumann said the plutonium in particular wasn't enough to be fashioned into a nuclear bomb.

Luckily in this case, they claim it was not enough to create a weapon.... however...

Regarding transfers to academic researchers, government agencies, or commercial firms within the United States, the Energy Department's inspector general concluded in 2009 –the most recent public accounting – that at least a pound of plutonium and 45 pounds of highly-enriched uranium loaned from military stocks had been officially listed until 2004 as securely stored, when in fact it was missing.

As little as nine pounds of highly-enriched uranium (the weight of an average cat) or 7 pounds of plutonium (the weight of a brick) can produce a functioning nuclear warhead, according to Hans Kristensen, director of the Nuclear Information Project at the Federation of American Scientists. So the missing amount in this category alone — the MUF stemming from loans to researchers from military stocks -- is still enough to produce at least five nuclear bombs comparable to those that obliterated Hiroshima and Nagasaki, experts say. Plutonium in any quantity is also highly carcinogenic.

This just reeks in my opinion. You would think that after so many indescrepencies and outright theft they would fix the procedure around these practices. Just bouncing ideas around, I feel like this is either blatant incompetence (wouldn't be surprised), a mixture of dumb luck on thefts, smart groups planning thefts for something along the line of Sum of All Fears, or hiding the tracks to transport the material to allies with no trail.

And who could forget this gem.
edit on 16-7-2018 by CriticalStinker because: (no reason given)

posted on Jul, 16 2018 @ 09:58 AM
link
We shared the Manhattan project with the Soviet Union through the Lend-Lease program. Uranium, heavy water and technical information were shipped out to Moscow under orders from Harry Hopkins. It's how the Soviets managed to build the bomb by 1948 - helping to ensure the Cold War and continued profits for the MIC.

originally posted by: face23785
a reply to: CriticalStinker

Wouldn't surprise me in the least.

Hmmmmm the Operation Blackjack slides did featured something similar: 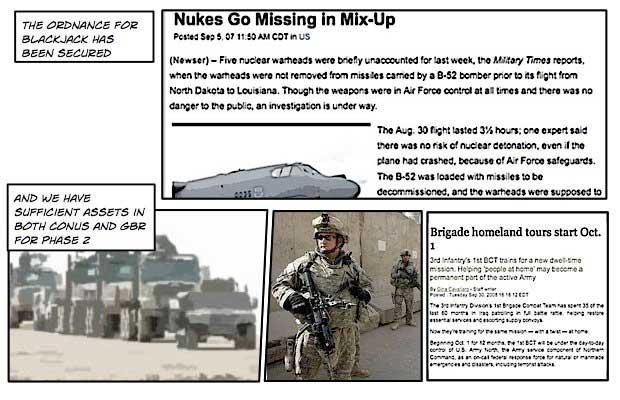 But when they stopped at a Marriott hotel just off Highway 410, in a high-crime neighborhood filled with temp agencies and ranch homes, they left those sensors on the back seat of their rented Ford Expedition. When they awoke the next morning, the window had been smashed and the special valises holding these sensors and nuclear materials had vanished.

For all the world, this sounds like it was deliberately done.

Just a thought here.... it’s well-documented that the US government utilizes agents that oftentimes go to great lengths to use honeypots or other nefarious means to trap or incite would-be terrosrists. Usually to produce results that stimulate their budget. Maybe they got tired of being associated or sniffed out and just set up a snatch through unorthodox channels. Wash, rinse, repeat.

They are for calibrating the equipment and unless you carried them in your pocket all day will cause little problem.

I hope the thieves did carry them for days or weeks.
It would serve them right to get sterilized by the thefts.

In there case darwin always wins.