Democratic Socialist Darling Ocasio-Cortez Demonstrating How Clueless She Is

page: 1
24
<<   2  3  4 >>
log in
join
share:
shawmanfromny
+3 more
posted on Jul, 16 2018 @ 09:33 AM
link
Well, Alexandria Ocasio-Cortez, "the future of the Democratic Party" sure doesn't seem that bright. This "working girl from the Bronx", who omitted from her campaign bio, that she actually lived in Westchester County since the age of five, is a self described, Democratic Socialist...yet she has a hard time even defining it.

Ocasio-Cortez then went on to argue that she believes the Democratic Party’s future is about the “working class” – without going into any specifics about how “democratic socialism” is any different from “socialism.”

In a word, Ocasio-Cortez’s worldview is completely delusional. Socialism as an ideology is not magically different just because people voted for it via the democratic process.

millennials’ fascination with socialism is driven by the fact that they’re being forced to bear the economic brunt of the mistakes of their parents’ generation, and, frustrated and entitled, they’re turning to socialism in droves – whether they understand the ideology or not. But if they would just take a moment to study the facts, they’d quickly understand that socialism is not the way forward.

Isn't that similar to Trump's stance on Russia and Ukraine during the election? He promoted Russia's innocence while at the same time saying he didn't have all the facts.

FREE money for all!

Guess what, there are still no available facts proving anything.

Bah. She's no different from the others idiots in office.

From what I've seen. Many politicians are clueless.

Look at what Sasha Cohen did getting Republicans in office to support him arming toddlers.

You can't know everything. Why should politicians?

This thread isn't on Trump...it's on the "Rising Star" of the Democratic Party. Nice deflection though!

i think she's demonstrating how right she is for the democratic party; clueless.

The only difference is how harmful her positions are. Politicians all suck.

Why should politicians? Gee, I don't know, maybe because politicians propose, support and create laws or policies that govern the land and, by extension, its people.

originally posted by: UKTruth
I saw this earlier - absolutely hilarious!
All she had to say is 'I don't want to get into that because I don't have all the facts'...
To bail out when pushed shows how weak she is.

I think it more shows how much left-wing candidates expect the media to go easy on them. She probably figured she could just make a baseless claim without being pushed to elaborate on it. 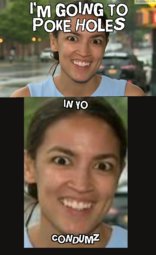 originally posted by: grey580
Look at what Sasha Cohen did getting Republicans in office to support him arming toddlers.

I so want a Puppy Pistol.

In today's political climate, you just have to be easy on the eyes to get ahead.

Scandals that would have ruined political careers long ago are actual resume material now.


She embodies the entire mindset of the democrat party.

Nice to look at, but nothing upstairs.

I've had farts with more substance than this bimbo.

There are two candidates of the left that don’t give two poops. And no they are most likely not who you are thinking of. And one would use most to mop the floor. Also there is a reason why someone has not been named yet. One person is holding back for now and the other needs counsel on how to run for a seat like this. But “she” can do it and do it well.

Vote yourself a lot of free snip, and often. How it ever gets paid for is of no concern.

And Ignoring the 14th amendment, and private property rights as a whole.

originally posted by: neo96
Prolly looking at their nominee.

Prolly looking at their nominee.

I literally just finished season 7 last night. That is really weird that you said that. But NO, you are incorrect. That would break the party considering the current climate.