Are its meeting places and buildings known to the general public?


Our local Masonic Temple is well known and sticks out like a sore thumb. In fact, it even has its own dedicated F*cabook page and has the occasional open day. We rarely hear anything from the lodges, but they don't really come across as being overly secretive, but what do I know.

As a side note, I was just searching for a relevant website and in doing that I discovered that there are twelve lodges locally, which surprised me, as I live on a small island that's only 9x5 miles in size. All local lodges use the same temple.

Anyway, here's a shot of the front of the temple; 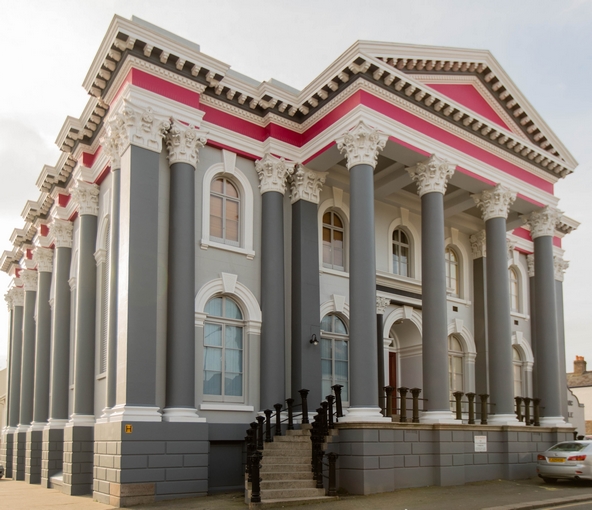 Here's a shot of the inside; 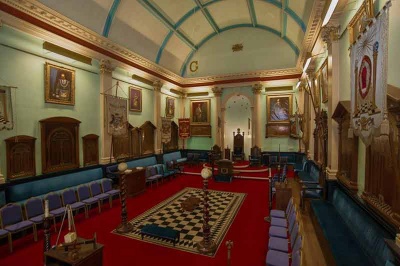 Here's a 360° panoramic
VIDEO shot from inside the temple, it can be paused (I'm unable to embed, my apologies)

edit on 28/12/12 by MerkabaTribeEntity because: Added Photo


No. Everybody knows about freemasons.


No. Just to help others without recognition.


No. They do a lot of activities to raise money for charities. Look for it, you will find them.


Yes, it does. But no obscure reason.


Look in the internet.


No. You can walk down the street and find any masonic lodge. Mine is in a very transited street with big giants columns and a big hard not to see eye.

Freemasons have already done that. It's called the United States of America. You're welcome.

J.R. raises a hand to shade his eyes from the one single 'bright' light in the auditorium.

Really? There is no Lucifer/Devil in the Abrahamic texts? That is news to me. Do you have any resources about that for me to dive into?

I did not post to attack your belief's, you have your's and I have mine - there is only one that know's the ultimate truth and it is neither you nor I.
But despite the latter day claim's that the OLDER and CLOSER to the original time's translations were wrong?.
www.kingjamesbibleonline.org...

In my estimation, what a beautiful building that is, both inside and out. In my district we have 8 lodges that meet in a shared building on different days. Our building is no longer called 'Temple'; it is now called a 'Center'. Its name was changed before I even knew about it; I was surprised by the change. Nothing was said about it; it just 'happened'. I'm not sure how long ago the name change occurred before I noticed it one evening on the front entrance.

posted on Jul, 13 2018 @ 10:57 AM
link
i'd find the whole concept of secret boys-own 'clubs' carried into adulthood only silly and juvenile, if not for the fact that so many masons are in positions of influence and power, and are beholden to the order and each other above all else. that makes them sinister.

Nice! Thank you for this: 'Bible Verses About Lucifer'. I've always thought the bible teaches about some sort of bad angel named satan or lucifer who is in opposition to God and Jesus. I personally think it's all mythical in nature. AugustusMasonicus declared that the bible does not reference lucifer or satan. I am quite interested in what he has to say about that. I hope he will return.

If only even more Masons were in control of the reigns of political power, our world would be a much better place for it. In what sense do you believe we are a "sinister" bunch?

And also to you I am sorry if I came across as attacking that was not my intent.


Stage 2 of 6 in my initiation of FreeMasonry

Are you certain you are receiving a regular initiation? No offence intended but, by the sounds of it, you aren't.

I know that was not your intent. Nor was it mine. I've calmed down considerably now that I've realized ATS is solid with solid people - that appears to be my experience of it so far. I was on 4chan for a while before ATS; there, it's absolutely crazy and I was constantly attacked, so when I first came over here to ATS, I was still in 'defense' mode. I feel like I can drop my defenses now and just have a good time.
edit on 13-7-2018 by CanadianMason because: why not?

I think Chinese whispers may have played a part in the mystery.

The Mason lodge in my town is just a normal building-no symbolic architecture, no ominous chanting...it's just a boring old building that could easily pass as an office block. And when they march in parades they aren't draped with gold threaded robes while burning effigies of false gods-oh wait that was Bohemian Grove.

However secrets can be hidden in plain sight, after all no one has found the HQ to my secret cabal, I Say we should leave the 'no girls allowed' club to call all atheists stupid and let them shoot some pool or whatever tickles their fancy.

What's the difference here, or is there none?

That Masonic building in your town sounds a lot like mine, lol! Boring and non-descript. We're not a very artistic bunch here - we're mostly deep rock miners and accountants. Not very imaginative. I work for Correctional Services and, ironically, the outside of my Lodge building almost looks like a correctional facility. (Kidding, it's not that bad.)

That was a very interesting read. Bookmarked! There are a few Traditional Observance Lodges in the western part of my jurisdiction. I think the young millennials who have and are joining the fraternity are going to reform and revive Masonry. They are incredibly smart!

Masonry will never be revived...indeed it has been fully reformed and conquered already.

A nice place to gather and have small support groups though.

Dr. Richard Carrier, an atheist, is my go-to guy. He's absolutely brilliant. I'd be an atheist if it weren't for the fact that I'm a Freemason. I'm right on the borderline.