Last time I checked I was not a soldier of the Illuminati.

LOL you don't even realise your in their army.

Would you be willing to do my astrological chart, in private?


It's been a long time since i was a student at the Faculty of astrological Studies and am a little rusty in basic techniques as i am a specialist in fixed stars and the most ancient astrological practices called parans, i will do a report for you on this if you want which you would find interesting as a freemason, i can enlarge on this later with basic astrology.
www.astrology.org.uk...
Please note i'm an investigator of archaeoastronomy, but perhaps i might look towards astrology belief kindly!
In my life i have had many frightening experiences that i have explained just as an investigator, one of them below that i needed a new set of underpants:-
www.abovetopsecret.com...
I need date of birth, location of birth and time of birth, give me a private message.....would you like my observations of the Lincoln Assassination, it is sadly fascinating!
edit on 6-11-2018 by Astronomer62 because: Link fault
edit on 6-11-2018 by Astronomer62 because: Link fault
edit on 6-11-2018 by Astronomer62 because: Edit

Thank you for accepting my offer which, on second thought, I now rescind due to potentially doxxing myself in the process. No offence intended; I'm sure you understand. One can't be too cautious on the internet these days!

I've always believed astrology is a pseudo-science but, archeoastronomy is not. I will read about your "frightening experiences" at the link you provided when I get back home later today. Thanks for sharing.

I am interested in your research on the Lincoln assassination, yes.

Also, I am curious what you think of astro-theology.

originally posted by: Astronomer62
I have some observations about the Assassination of President Lincoln, by John Wilkes Booth that probably involves a fringe group called The Knights of the Golden Circle, Booth was probably a member, would any like to hear about my research?
knightsofthegoldencircle.webs.com...

Hi CanadianMason,
The American Civil War was an awful event, brother against brother, mason against mason, and so it was with an Eastern acting family, i have already mentioned that John Wilkes Booth was probably a member of the Knights of the Golden Circle, a fringe group started in the South, however his brother was a regular New York Mason of New York Lodge number 330, you can read what he felt about his brothers actions below, please scroll down link to Edwin Booth:-
www.nytimes.com...
Edwin Booth was broken by his brothers actions. John Wilkes Booth loved playing Brutus on stage so loved symbolism, it is likely he mixed up the symbolism of Jesus Christ and the Assassination of Julius Caesar when he murdered President Lincoln, on Good Friday but perhaps i'm getting ahead of my story. I have to do an astronomy graph, so l will be back!
edit on 6-11-2018 by Astronomer62 because: Link fault
edit on 6-11-2018 by Astronomer62 because: Edit

posted on Nov, 6 2018 @ 01:30 PM
link
Sorry guys, i can't get last link to work from the New York Times, however part of the correspondence regarding Edwin Booth is below:- 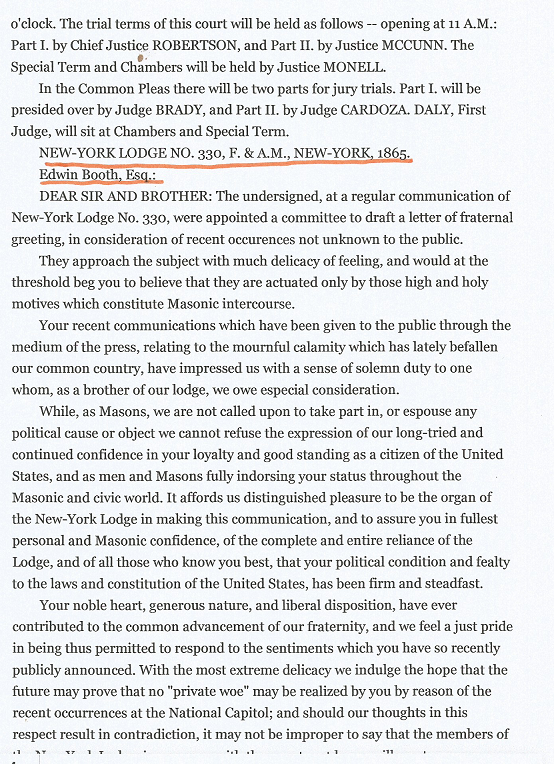 posted on Nov, 6 2018 @ 01:59 PM
link
The commanding officer at the cadet unit where my friend's son was a member apparently stated that he had once been a mason, but had withdrawn from membership after a number of years, because the older masons were resisting changes which were necessary in a changing, modern world. Because they were determined to remain stuck in the past, a thousand opportunities went by & were missed as a result.

Interestingly, he explained that he had also once been approached by a member of the 'American Illuminati', who had offered him a deal: Join our order, but remain in your existing posts. We will fly you to a foreign nation where you will meet a representative who will bequeath you a Swiss-type bank account which you can access for any purpose, at any time, which will have a total of £1,000,000 available. You will thereafter be required to swear strict obedience over all other oaths in the service of our order, to act as we instruct you within the existing organisations of which you are a member, towards which you will conceal our arrangement.

He refused the offer, because he felt there was a definite edge to the deal which was sharpened for evil, though he didn't know exactly what they would have asked him to do. When asked the reason that they had tried to recruit him in the first place, he said that because of his ties to the Royal Navy & the Freemasons, also being a knight of the order of St Michael & St George, it was expected that he would have inroads to people in various powerful positions, and they were simply trying to buy influence & information. Very humble guy apparently, really bold of him to refuse the offer, and great for the nation, to know that we have good people in charge, mainly.

This anecdote is absolutely true, with the man in question being a Lieutenant Commander in the Royal Navy before he retired & became a volunteer officer working with the cadet forces. Hearing this story I had the realisation that the real secret societies are the ones that you & I would never ordinarily hear of or come across evidence for, because they are actually, literally secret. Only people in positions of power & authority are approached to join, and even those who refuse generally wouldn't admit to the situation in any public capacity, for fear of reprisals further down the road. Food for thought..

posted on Nov, 6 2018 @ 02:08 PM
link
I have to say that i felt sorry for Edwin Booth who never really recovered from his brothers action, he was a great Shakespearean actor. I tend to have black humour, so i hope he didn't play in Macbeth to often, after all he was born on Halloween and would have had enough nightmares regarding his brother!
en.wikipedia.org...
John Wilkes Booth is reported to have said Sic Semper Tyrannis when he shot President Lincoln in the skull!
en.wikipedia.org...

posted on Nov, 6 2018 @ 03:23 PM
link
a reply to: AstralThundera
Hi AstralThunder, i am in the middle of writing about Lincoln, so i will leave others to comment on your thread section, i love your avatar picture of the Mandelbrot Set which i am intensely interested in, i love fractals and the Golden Ratio!
Strangely by coincidence Edwin Booth probably saved Abe Lincoln's son from death just before his brother murdered Lincoln, he fell underneath a moving train, and Edwin helped him out!
The Knights of the Golden Circle were established on 4th July 1854, that John Wilkes Booth was likely a member.
knightsofthegoldencircle.webs.com...

posted on Nov, 6 2018 @ 03:37 PM
link
By approx. 1800, Alnilam wasn't rising with the Sun in Philadelphia on 4th July by one degree margin it was on the move due to axial precession, so we find it in Lexington, Kentucky as this is a latitude alignment that was also showing up by this time in Washington DC.
I'm hurting with disablement, so is enough for tonight in London, and Alnilam will be rising here in a few minutes, i go to the comfort of my bed! 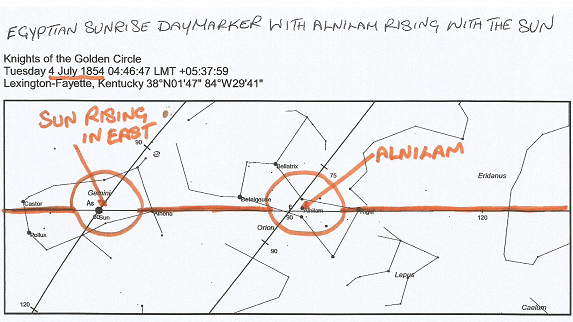 By reading both please note that John Wilkes Booth and fellow conspirators had a meeting to plan how to kidnap President Lincoln, this meeting was on 15th March 1865, no doubt he found the symbolism fitted his black humour being the IDES OF MARCH.
He had planned to kidnap President Lincoln in Washington DC on 17th March 1865, but the attempt didn't happen, as Lincoln changed his plans.
April 14th 1865 was Good Friday, so i feel that John Wilkes Booth thought the symbolism with assassination was auspicious, but he had only found out earlier in the day that Lincoln would be attending Fords Theatre!
Finally this day wasn't aligned to a day marker, but the conspirators had planned simultaneous assassinations of Lincoln, Secretary of State, William Henry Steward and Vice President Andrew Johnson, all at the mysterious time of 10:15pm, perhaps not so mysterious!
I will be back soon!

posted on Nov, 7 2018 @ 08:28 AM
link
Firstly i will deal with the attempted kidnap of President Lincoln, that didn't happen in Washington DC as the President changed his plans for the evening of 17th March 1865.
However Booth had chosen midnight day marker for Sirius was setting in the West, i will show astronomy graph on next thread section.

posted on Nov, 7 2018 @ 08:41 AM
link
Astronomy graph below showing that midnight day marker was picked for 17th March 1865 in Washington DC, with the failed kidnap attempt, Sirius setting in the West 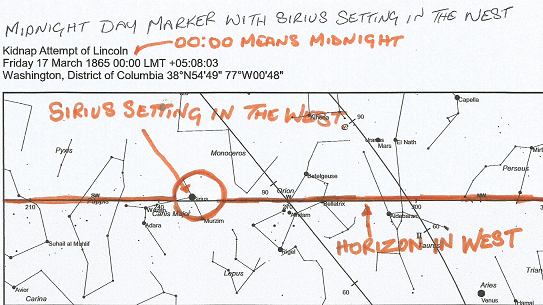 posted on Nov, 7 2018 @ 08:53 AM
link
As Lincoln lay dying with a bullet in his skull at 10:15pm on Good Friday 14th April 1865 in Washington DC, if he could have given a reply to John Wilkes Booth, it may have been "Et Tu Brute"
www.thephilologyinstitute.com...
Booth loved symbolism, which would have appealed to his black humour as an actor!
Sirius was setting in the West at 10:15pm at location, thus President Lincoln was assassinated under similar alignments to Julius Caesar 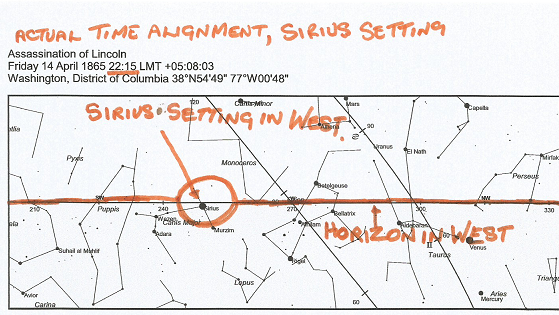 posted on Nov, 7 2018 @ 11:34 AM
link
Last post for me, yawn ZZZzzz.
Strangely the father of John Wilkes Booth, Junius Brutus Booth had threatened to assassinate President Andrew Jackson, in a letter dated 4th July 1835, while he was in Philadelphia, which is auspicious!
The family had a BRUTUS thing going on with patterns, i wonder what a forensic profiler would think?:-
news.utk.edu...

This is fascinating stuff, Astronomer. Your research is amazing. Get some zzzzzssss!


Hi CanadianMason,
You have to allow my little puzzle jokes ha ha!
Perhaps i'm a scribe monk of old, that recorded history and observed the great events, i might just believe in the oldest of all astrology being Paranatellonta or parans for short, i might even follow my star being Regulus, The Watcher of the North,....perhaps i watch and record, LOL!
www.ncbi.nlm.nih.gov...
I have not finished my story about the Booth family yet, but i thought i would give you some electricity up the spine, by moving on to the Assassination of President Garfield, who was shot on 2nd July 1881 in Washington DC by Charles J.Guiteau, i would look towards a strange Christian cult for having the esoteric knowledge that he belonged to for a time called Oneida Commune
Midnight day marker was chosen, Sirius on the Nadir, Due North, which can mean foundation or death.
en.wikipedia.org... 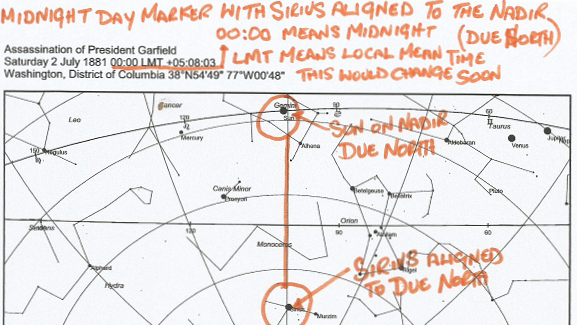