Interesting. The Canadian Parliament building is located in Ottawa, Ontario. I live about six hours North West of there. Have you looked into the Manitoba legislative building? That's an amazing place to visit. I was there in 2015 and was blown away.

posted on Nov, 1 2018 @ 11:37 AM
link
a reply to: CanadianMason
Hi CanadianMason,
There isn't much that i haven't investigated, and yes i found the Manitoba Legislative Building fascinating, be careful of a guy called Frank Albo who investigates it as he can get some symbolism wrong, but overall is ok!
en.wikipedia.org...
Please note opening ceremony on July 15th 1920, Alnilam and Belt of Orion rose with the Sun on that day and location!
www.youtube.com...
I thought this small video regarding pyramid text and the Constellation of Orion would interest:-
www.youtube.com... 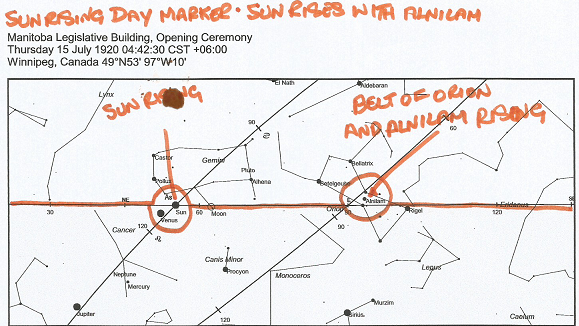 posted on Nov, 1 2018 @ 11:44 AM
link
a reply to: ManyMasks
I consider myself fairly knowledgeable on all things Freemasonry, but there are always new things to learn.

...you have just said all the thing's that masons don't do or don't worship, but you don't know, you're not privy to their secrets...


I simply stated what I know to be true.

...there's probably not a mason in your state that's privileged with the true secrets...

You just don't know, just like the rest of us.

Wow, that is so fascinating (along with the alignment of the Ottawa Parliament with Sirius). I'm having a hard time wrapping my brain around this though. I'm not sure what to think other than how important Sirius is? The snippet from the pyramid text you provided, too. Claims he comes from the sky and is one of the gods.....makes you wonder eh? Anyway, I love it, keep it coming! Thanks for sharing!

posted on Nov, 2 2018 @ 05:29 AM
link
Astronauts who purportedly went to moon all masons. Never trust anything a mason tells you.

posted on Nov, 2 2018 @ 09:53 AM
link
a reply to: CanadianMason
Hi CanadianMason,
Yes, it is hard to get your head straight with what i show, but i have been investigating a long time so is common to me!
Most people are fascinated with "The Golden Boy" on top of the dome of the Manitoba Building which is the god Hermes, he was placed on the roof on Friday 21st November 1919, link below:-
dosmagazine.com...
I will continue soon with astronomy graphs.

posted on Nov, 2 2018 @ 10:06 AM
link
As Hermes is the Messenger of the Gods, i wonder what message he has for us on 21st November 1919?
I think he would be saying look to sunrise, astronomy graph showing Sun rising in East below in Winnipeg, however on next thread section i will show the Western horizon at the same time, which is where the action is! 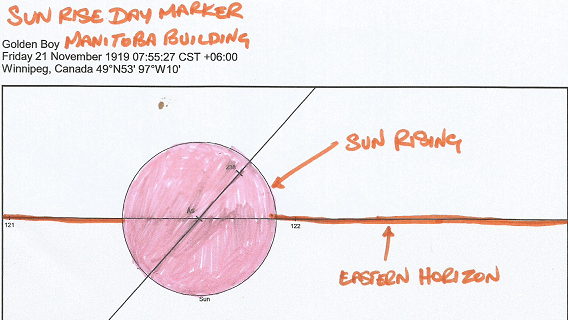 posted on Nov, 2 2018 @ 10:11 AM
link
For Sirius and Alnilam to set while the Sun rises is special, the right latitude is needed, astronomy graph below, i don't think i need to say more! 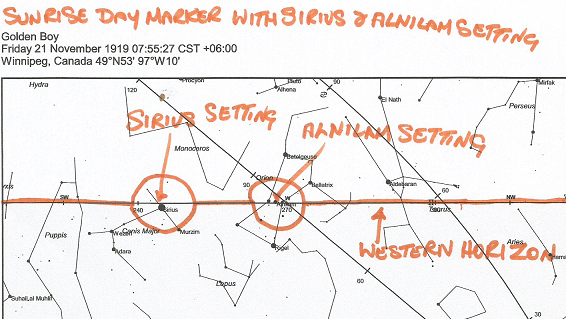 Oh dear. You have been reading this again, haven't you?

This is Flat Earth lies and utter nonsense.

Never trust anyone who moons a Mason! lol

Wait...you are trying to show me the significance of the rising of the sun and setting of the Sirius coinciding with particular important dates, like somebody planned it that way or something?
edit on 2-11-2018 by CanadianMason because: (no reason given)

posted on Nov, 2 2018 @ 12:39 PM
link
a reply to: CanadianMason
Hi CanadianMason,
Please forgive my English zany humour but you are beginning to get spooked by me LOL.
Yes it is an ancient tradition to pick days to align to the stars, especially to Sirius and Alnilam!
As i have just mentioned 21 November, i will have something to say if Brexit Talks gets anything agreed on this day!
www.bbc.co.uk...
You never know i could be a spooky mystic Ha Ha!
I do draw weird drawings about the Golden Ratio, one at bottom of thread, sometimes people write messages in the sky, would you like know the message for Julius Caesar when he was assassinated?
I am just a humble monk like person suffering from a broken spine! 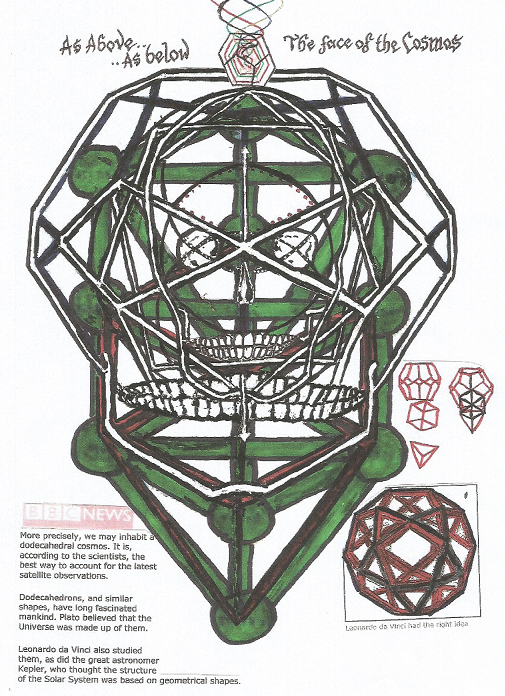 Hi again Astronomer62. Another fascinating post. This time I did a little digging into ... well, I simply took your words and plugged them in. I googled "ancient tradition to pick days to align to the stars, especially to Sirius and Alnilam", and here's the result page I got:

I clicked on the first link, "Zeitgeist Astronomy - Tracer345.org", but it didn't really seem like it had what I was looking for. So, I pretty much skipped that one and clicked on the second one, "Sirius and Alnilam, Secret Societies - Ancient Mysteries"

That one kept my attention for a little while. It appears to be some sort of forum. The first poster there is called "monk 56 - psychic spy". He (or she) started the thread in 2012. I immediately thought of you because you said you are "just a humble monk". What are the odds of that, lol! Unless you are monk 56!! You talk about the same things....hmmm

Anyway, i have some reading to do on that thread...thanks for leading me to yet another rabbit hole! Please continue to post your material. So many of us Masons don't know much about Freemasonry's esoteric side. I'd like to learn more about it, as much as I can.

oh, and sure, show me the Julius Ceasar thing!
edit on 2-11-2018 by CanadianMason because: (no reason given)

posted on Nov, 2 2018 @ 03:09 PM
link
a reply to: CanadianMason
Yes CanadianMason, the monk mention i thought you would look up Ha Ha!
However that was 6 years ago and many of the links don't now work, i was 56 then, i am 62 now, so yes you solved the puzzle!
I have debated with KSigMason under the avatar Monk on a different forum, so perhaps he will again!
What you have to remember about Julius Caesar was that the Senate hated his girlfriend Cleopatra, who he had a son by called Caesarion, they thought he was going to declare himself a god, end democracy, and have Caesarion next in line to rule Rome!
Cleopatra came from the Greek Ptolemaic Dynasty started by Alexander the Great, so wasn't an Egyptian Pharaoh, but she was fiercely patriotic and thought of herself as ISIS on Earth, so that sets the scene, first astronomy graph below, is sunset before Ides of March in Rome, which is ancient Greek day marker, in this case it is strange and could hold a message, especially as our "Golden Boy" Hermes or Mercury sets with the Sun, being the the one that gives a message from the gods! 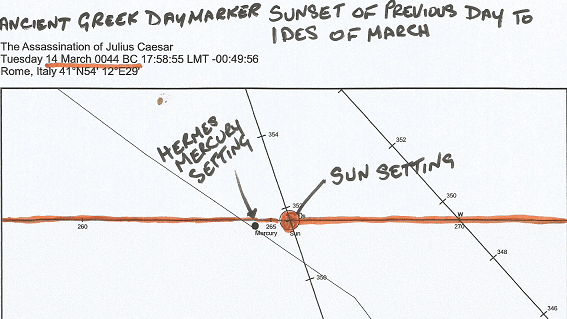 posted on Nov, 2 2018 @ 03:26 PM
link
So 15th March 0044 BC, the Ides of March, is aligned to sunset previous to the Roman way which is Sunrise which in this case is auspicious to the Message.
As the Sun set Sirius was culminating, obviously Caesar was killed because of Cleopatra, she thought of herself as ISIS on Earth and the Isis star is Sirius!
Cleopatra came from an ancient Greek dynasty so using Greek day start was a message that a Greek person was to blame for the assassination.
I have no idea who the astrologer was who chose this day for his Senate masters, but what he wrote will stay in the Heavens forever and has become part of the Akashic Records!
The message was "Nothing personal, just business, you were a great leader but had to be assassinated because of Cleopatra". 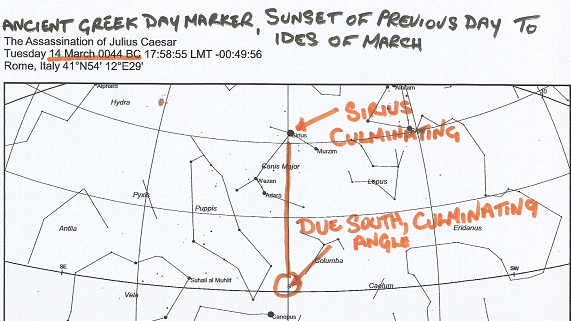 Wait...you are trying to show me the significance of the rising of the sun and setting of the Sirius coinciding with particular important dates, like somebody planned it that way or something?

Hi CanadianMason,
You mentioned 11:11, which is coming up soon, and i think you have guessed i like synchronicity to bounce off in my puzzles! I beg your pardon for leaving a link to other work i have done, on your thread, but it involves the 11th hour of the 11th day of the 11th month, however i think it is Fringe masons involved, not attached to regular freemasons!
Anyhow i haven't finished it yet, but link is below:-
www.abovetopsecret.com...

Does this pattern reverse itself in 480,000 years when Canopus becomes brighter than Sirius?

posted on Nov, 2 2018 @ 05:59 PM
link
a reply to: Cauliflower
Hi Cauliflower,
I really don't know, sorry, Axial Precession of 25,772 years is enough for me to think about!
en.wikipedia.org...
The alignments i mention generally stay in place for approx. 200 years, and then slip out of synch after that, The Declaration of Independence date in Philadelphia has now slipped so Alnilam doesn't rise with the Sun within one degree, however the alignment of the 4th July is now in Washington DC.
Before Christmas i will explain our Calendar and how it was aligned, it doesn't align everywhere with Sirius because of later time zones that Pope Gregory XIII didn't know would happen.
Sirius is aligned to the Prime Meridian at 00*00' Longitude, so other locations must have a longitude every 15 degrees up from that, as one degree is equal to 4 minutes of time, which obviously then makes an hour!
You may see Sirius culminate in New York area, but i doubt it due to light pollution, or Cairo etc.
Anyhow it culminates exactly to the minute of New Year, so raise a glass to Cleopatra as she will be looking at you LOL!
earthsky.org...