I had a great commander in the AF who once told us not to be the "loud American" cuz you make us ALL look bad. have some great allies, and will do AT(after Trump). In the mean time he is ripping up the old playbook, and I am enjoying this new game.


Trump is a psycho!


Killary is a criminal. See, we both have personal opinions


He did indeed questioned the fairness of the member states contributions. he also ripped a new @sshole of Germany by simply asking how is it fair that germany wants the US to defend them from Russia yet sending billions of dollars TO Russia on a new gas deal? A great question I might add. Not to mention Germany's reply which was, let a nation decide who they do business with, let the NATO not tell that nation what to do... Fair game I guess when it is about their skin. What a f@#k about the migrant crisis, mandatory quota for EU nations????? I guess Germany can decide shoulder to shouldes with Brussels about that, but not when is it about german business right? The hypocricy there is out of this world.


With what? By saying its not the US best interest to deal with the UK if there is a soft Brexit? He was right again there. Slighly better opportunities dealing with the EU...


The Mayor of London


I applaude him to insult that POS. Since he is the mayor of London, the crime rate is in the sky, and that POS most important thing to do is allow to insult a sitting US president by a patethic ballon... And you are angry that Trump doesnt give a flying f..k about the UK? They do a lot for that reaction buddy...

Yes how dare Trump ask them why they are asking him to protect them from Russia ... as they increase their dependence on Russia with new energy deals.

Ohh, I see your problem you take everything President Trump says as factual

Trump is a compulsive liar

I am not quoting Trump, but NATO.

Theresa May couldn't say anything to freak out American leadership and citizens, could she?

Because they wanted Brexit and do not like how May is doing it.

Seriously though, Britz get pretty uppety about everything the US does or doesnt do. The BBC feeds that anger by reporting the bad side of things.
Its only about half of the UK in reality. And Fox is overblowing that. What Trump was saying is that if the UK passses Brexit as May has it now.....then legally they wont be able to make their own deal. They will have to get permission from their President....you know.....the guy that outranks the Prime Minister, in Brussells, whats his name.
a reply to: carewemust


Yes trump said mean things... have people not been paying attention, he says mean things then walks it back and takes the route that works best for him. Its a form of negotiation that usually isn't seen on the political scale because it ruffles the feathers of people on the receiving end.

Trump says things for effect , then the opposite happens when the reality of a situation becomes apparent.
Don't listen to what he says watch what he does.

Trump calls the Sun interview and his claims about Brexit Fake News.


You really couldn't make it up.

Nah, Trump asked nations to double the contribution to 4%, it failed and the original 2014 2% agreement by 2025still stands, according to everyone present except Trump.

NATO allies shrugged off the demand as part and parcel of Trump’s brash push for allies to spend more on their own defense at a summit in Brussels, with a quip from the alliance’s chief that it should aim to meet its goal before reaching further.

“We should first get to 2 pct,” NATO Secretary-General Jens Stoltenberg, adding that eight of the 29 allies were meeting that target, while others had a plan to do - turning a leaf on years of defense budget cuts.
----- 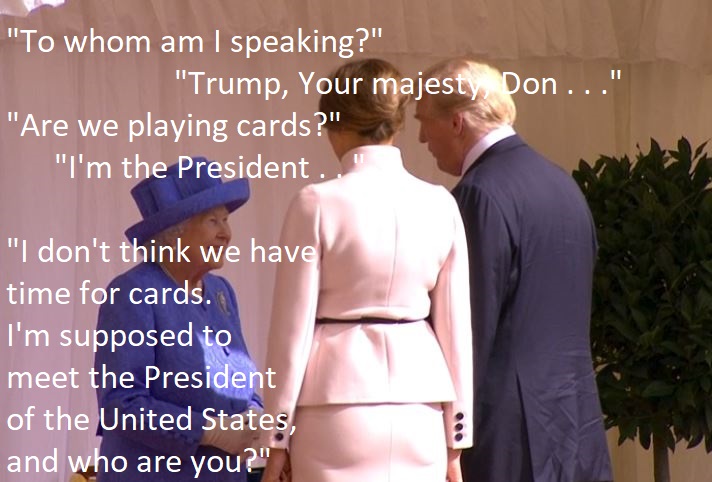 That is pretty funny.


I am so stealing that.

And you have no clue what you are talking about. What Trump wants is them to increase spending. They admitted they need to do it and it's a problem. Learn about negotiations. If you want 3% you don't ask for 3%, you start with something higher.

Now show me where Trump actually said everyone agreed to 4%, I never saw that.


originally posted by: MiddleInsite
a reply to: eXia7


All talk and no substance, yet Trump has accomplished more with the economy in 1 year than Obama did in 8 years. Give me a break. The guy is for America, and thats good enough for me.


My cup over runneth with liberal tears.

It's a tricky course he has plotted, short term gain may actually come at the cost of long term stability, as long as he is at the helm it may be safe but once a less business talented president takes over from either or other party's then continued success in that venture is not a given.
Alienating trading partners is not always a wise strategy but then again getting out of a bumb deal to gain your nation better one's is only common sense when you look at it.