From a Blazar located in the Direction of the constellation Orion : 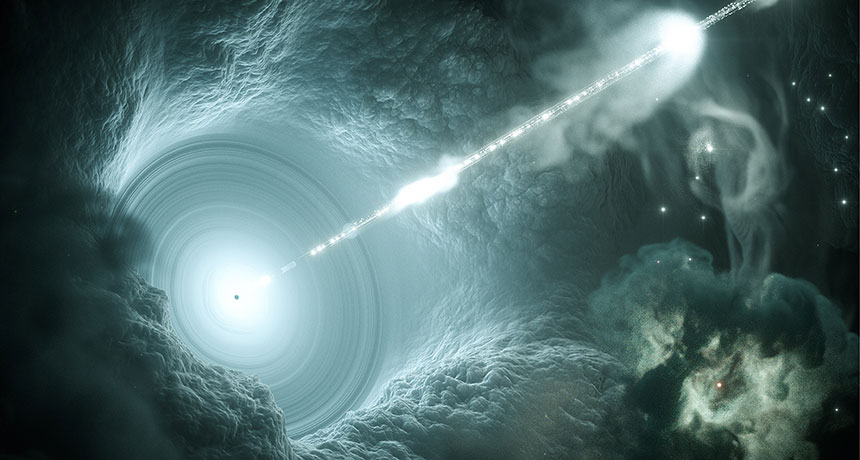 HOME BASE Scientists traced a high-energy neutrino back to its source: a blazar, a galaxy harboring a supermassive black hole that fuels powerful jets of particles.


A zippy little particle has been traced back to its cosmic stomping grounds, a flaring galaxy 4 billion light-years away, for the first time solving a cosmic whodunit. Scientists have long puzzled over the sources of high-energy particles from space, which batter the Earth at energies that can outstrip the world’s most advanced particle accelerators. Now, physicists have identified the source of an energetic, lightweight particle called a neutrino. The intergalactic voyager came from a type of bright galaxy called a blazar located in the direction of the constellation Orion, scientists report online July 12 in Science.

“This is super exciting news,” says astrophysicist Angela Olinto of the University of Chicago, who was not involved with the new result. “It’s marking the beginning of what we call neutrino astronomy,” which uses the nearly massless particles to reveal secrets of cosmic oddities like blazars. While there may be additional cosmic sources for high-energy neutrinos, the detection indicates that at least some come from blazars. The result also suggests that blazars emit other energetic particles known as cosmic rays, which are produced in tandem with neutrinos. The origins of high-energy cosmic rays are poorly understood and until now, “nobody has ever been able to pinpoint a source that produces them,” says astrophysicist Francis Halzen of the University of Wisconsin–Madison, a leader of IceCube, the Antarctic neutrino observatory that detected the particle.

Since I was little I have been fascinated by space and what is out there. I love things like this. It makes my mind go a mile a minute with wonder. We really have no idea what really goes on in space or the universe so things like this are a cool find.