UK woman dies after being exposed to nerve agent novichok

They're practically within walking distance 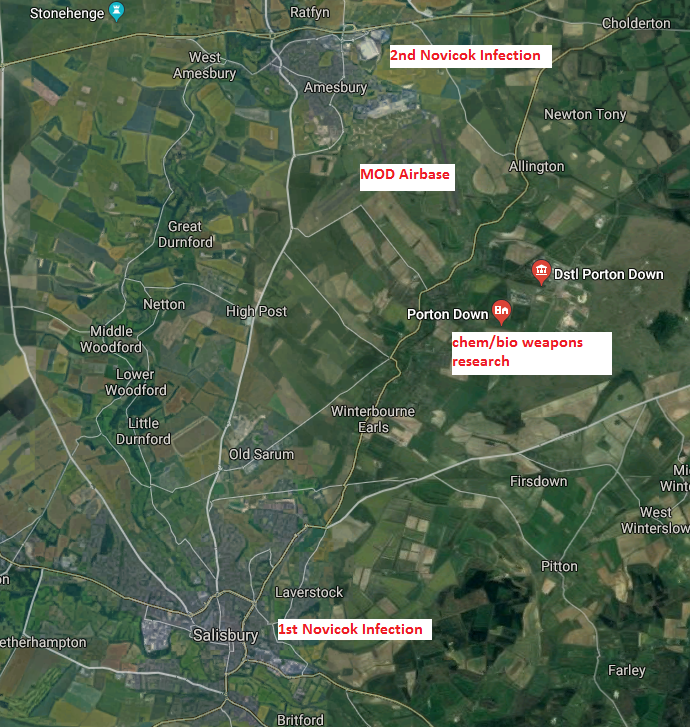 If this was an attack, why not put it at the entrance of these facilities?
Or at the local pub where there military hang out?

The fact Novichock has hit 4 people only km's away from Porton Down is too much of a coincidence to write off
edit on 8/7/18 by Agit8dChop because: (no reason given)

Aside from the sea and ocean that is a natural border? LoL

We are after all an island nation.

And we have customs and passport checks at every international airport/port of entry.

Fact is our security is on par with your own if not better and more draconian really.


originally posted by: Alien Abduct
It says in the the first two sentences in the OP that her death is under a murder investigation. Did you read the OP?


I did, I just like to see evidences before assuming things.

I think the fact the authorities are handling it as a murder is a pretty good indicator that there is evidence of foul play.

They may be handling it as a murder just because of the substance involved.

People who go around letting something like that leak aren't exactly innocent of what will happen, but that doesn't also necessarily follow that they were targeting anyone in particular.

originally posted by: Kharron
Where are all the remote viewers when you need one?!

Remember all the threads we used to have when people would say, give me a target or a name or an envelope and they will remote view?

We need one of those old members to remote view what happened here.


They disappeared when this turned into a mostly political site. Now we just have experts at arguing for a political slant in everything.

I would say that to call the death of this individual an attack is somewhat of a stretch. Although any deployment of a chemical weapon resulting in a death ought to be called a murder, its pretty clear that this death had nothing to do with any deliberate targeting of that individual, and its highly unlikely that this was meant to be a "whomsoever gets it, gets it" scenario.

This seems in every light one can shine on it, to have been an unfortunate contamination, of someone who was never supposed to come into contact with the material, even from the perspective of the individual who was attempting to kill Sergei Skripal. Its likely, beyond likely, that this contamination of Dawn Sturgess, and her partner, was entirely accidental, having happened when the couple came across the container in which the material from the Skripal attack, had been contained prior to its use. Its probable that the container was disposed of by the original attacker, and picked up by the couple much later on.

Furthermore, in terms of probable attackers identity... its perfectly possible that its a terror group, but if it is, like all terrorist actions affecting western nations, its the fault of western governments and intelligence agencies, because all terrorist organisations operating near enough to western nations to threaten them with anything, are proxy armies OF western nations. Its beyond unlikely that Russia had a damned thing to do with this, that I am happy to say baldly.

Realistically speaking, the attack was on Sergei and Yulia Skripal, and these two people who are in hospital now, are just very unlucky to have come across the stuff later on.
edit on 9-7-2018 by TrueBrit because: (no reason given)

The don't open murder investigations unless they believe one has been committed.

This particular nerve agent is very rare and produced in Russia. Even if they were exposed due to indiscriminate contamination it is still an attack.

It's also made in Iran, Iraq, Ukraine, Lithuania, America.

The UK, France, Germany, South Africa, and... well, any nation under the sun has the knowledge and capability of making it.

There are known stockpiles of it in the Ukraine, inherited from when they were part of the USSR.

As you said previously..


Personally, my gut feeling is that the UK is behind this. They need to build a rhetoric to distract the people from the machinations of government. That is, they need to create a "bad guy". Russia is the obvious target.

So they poison some people, and blame it on the Russians but then realise that the international fall-out from actually having killed Russian citizens may be more than they need. So they do their best to help them recover. Wait a few weeks...

Poison our own people, blame the Russians. Russians don't really care as it doesn't involve its own citizens. Britons start hissing and snarling about the Russians.

Yes, the UK has form for doing that, form for manipulating its own people, and form for executing its own people to further state aims. Don't believe me? Google for the Island of Gruinard where they executed an entire village. Then classified it.


Yes, the UK has form for doing that, form for manipulating its own people, and form for executing its own people to further state aims. Don't believe me? Google for the Island of Gruinard where they executed an entire village. Then classified it.

No they didn't. Gruinard was uninhabited since the 1920s. The Anthrax tests were conducted on the uninhabited island during WW2.

originally posted by: stosh64
a reply to: projectvxn

Who was this woman? Do you know if she was connected to government or political ties? Business or corporate connections?

Or just some poor woman in the wrong place at the wrong time?


they were staying at the homeless hostel...he is a heroin user they dumpster dive

I bet its some one who did or still works at the UK plant making it.
good ide to test the first one on russians.
that keeps them bussy.

originally posted by: buddha
Some one is testing it on people!
the first time it was week and did not kill the two people.
second time dead in about a week,
wait for more!!! Then the BIG one...

I suppose this woman's health was not as good as the Skripal's, so no surprises with her death for me.

The Russian were lucky to have collapsed in a busy public place, resulting in a rapid response for quicker treatment

It is crucial for fast treatment

Main concern for Salisbury residents is where this couple went in the city after being contaminated, the bus they used to travel to Amesbury was taken away on Wednesday when the authorities realised this was more serious than it originally appeared

posted on Jul, 10 2018 @ 03:30 AM
link
Agents sponsored by the Russian govt poisoned the Skripals with nerve agent, chucked the empty but contaminated canister carelessly into a skip in Amesbury before legging it, two unfortunates from a homeless hostel found it while dumpster diving and get unintentionally poisoned.

That the Skripals poisoning was Russian govt sponsored is beyond reasonable doubt.

Their bizarre and unreasonable attitude about this really strongly suggests complicity.

Really, a good idea to test Novichok on Russians, or anyone for that matter???

Nobody deserves to die in such a fashion!

I know British paramedics are to start carrying an antidote to deadly nerve gas.

Probably Atropine or the like, but i don't think the emergency services, that attended the first incident would have come prepared immediately.

Some people are simply more susceptible to toxins than others, luck of the draw really.

originally posted by: CJCrawley
Agents sponsored by the Russian govt poisoned the Skripals with nerve agent, chucked the empty but contaminated canister carelessly into a skip in Amesbury before legging it, two unfortunates from a homeless hostel found it while dumpster diving and get unintentionally poisoned.


Don't they collect the garbage in the UK?
The Skripal's poisoning happened 118 days before this case.

Yes, they collect the trash from the garbage cans and litter bins dotted around.

And they do have litter pickers go round parks and such. But those teams do not get into every nook and cranny of the parks. They go around and make the place presentable and clean looking, but there are many places a thing might get tossed, that would not necessarily appear to a litter picker, but might be frequented by people who are used to occupying the space in a non-professional capacity.


It could be a skip, I suppose. You know - the ones that come and go on lorries - not refuse bins. But they still have not found the container or whatever which could be in any one of several locations.
edit on 10-7-2018 by oldcarpy because: (no reason given)

The health of the affected parties was one of my initial concerns.

Obviously Sergei and his daughter were strong as ox's, hence their survival. I was concerned for Sergei, because he was older, but he came through like a champ. But the two more recent folk... Its said that the authorities found drugs in the apartment of the male, and that the two had a "certain lifestyle".

This indicates that they may have been less strong in terms of their immune response and general structure than Sergei and Yulia, making their survival less and less likely.