WAR! What is it good for?

posted on Jul, 7 2018 @ 01:06 PM
link
In recent times I've been observing some fascinating rationalizations for the imperialist war machine, known as the United States Military. Quite the mythos has built up justifying US Foreign Policy. And now is your big chance to make your point.

Since nobody can possibly defeat our Navy, let alone actually invade, without getting nuked into oblivion, and all that stuff just keeps creating the new enemies "needed to be fought" 'next time', perhaps its best to skip the obvious self-delusions and test these ideas that US Foreign Policy makes dollars sense.

The general ideas I keep seeing include:
-It helps the economy (Corporate Welfare mind you).
-We need to protect all the worlds resources as if they're our own (Gobalism).

Since I dont know any defense contractors, nor people whom own huge stock portfolios in the disaster capitalist corporations out there, what damn good does any of it do me or any of mine?

To me its comes off the same as the SJW logic that since most CEO's are white somehow I've got white privilege, as if when I was born I had a stock portfolio handed to me by all those 'white corporations' just for being white. Meanwhile Bill Gates having $400,000,000,000,000,000,000 has yet to do me any good (actually since he's so greedy I cant competitively build PC's for people because I cant buy Windoze licenses by the million).

So Raytheon employs a bunch of people. And so on. But couldnt the .gov pour trillions of dollars into any other category of company and see the same trickle down? I'll bet we could see more if the point of it all wasnt killing people, if the motives had anything to do with actually boosting the economy. And how about if we didnt piss off by pissing on half the world we'd have more potential customers, I argue. I know for a fact Japan got away with its over the top tariffs forever now because we just "have to have" our imperialist bases on their land.

Then the idea of protecting natural resources. If we're not even a manufacturing nation anymore, if we're protecting resources just so they arrive in China's port to then be converted into throw away products for us to stack up in landfills -or melt down and send the raw materials back to them- then unless I'm missing something here, this is an absurd theory. 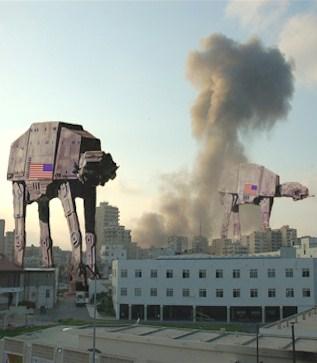 edit on 7-7-2018 by IgnoranceIsntBlisss because: (no reason given)

originally posted by: IgnoranceIsntBlisss
So, war, what is it good for??

For you and me, nothing.

But for a certain bunch of people, there is big money to be made out of it. And i think some wars are a massive satanic sacrifice ritual, a conspiracy, of some malevolent clubs.

posted on Jul, 7 2018 @ 01:27 PM
link
To be honest, you have only listed the recent failures of the MIC.
When you look at WW2 I think the US militairy has gained atleast 2 solid decades of prosperity for the USA.
Plus world domination in terms of gobal currency and firepower
On top of that they won the cold war with the rivaling global superpower and that without firing a single bullit(sort of)
I don't approve but its true

War keeps banks and financiers and arms dealers in business. It also is a method of population control and economic control of certain areas. (Hint: you can't have a high GDP if your cities are rubble and without electricity.)

The primary rationale to fight in WW2 was to push back against brutal imperialism. And then we became it.

Likewise, is Communism wasnt imperialist in practice we wouldnt have "had to" wage a de facto world war 3 against it. And "our" damage toll across the globe in that pursuit was far worse than what the USSR achieved.

And after it was over "we" marched on even harder and more bare knuckle in imperialist pursuits, now making up phantom enemies to go and fight while trumping them up as if, well, to quote GHWB "We're dealing with Hitler revisited" (Saddam Hussein [whom Bush's CIA put into power, and then sold him chemical weapons]).

Even if the goal was to defeat Fascism, well guess what, the US is a fascist state in the "Textbook" sense, and nowadays with the behavior of the Democrat voters it is also in the "Stereotypical" sense, achieved by employing mass scale Nazi propaganda & Identity Politics ("Hyper-Tribalist") methods no less. So so much for that notion.

And slavery? Look around the world in all the places US Foreign Policy has blown to pieces / destabilized entirely, and slavery is alive and well. One headline I saw not too long ago exclaimed there's never been more human slavery / trafficking in the world than there is today.

And as long as we keep focusing on WW2 and patting ourselves on the back for what our grandparents did, while self-deluding ourselves about what we've become, we all share in such blood and suffering.
edit on 7-7-2018 by IgnoranceIsntBlisss because: (no reason given)

War is what happens when we elect poor leaders and they suck at their job.


Back in the day, we used to fight wars to win them.


Now we fight because it's business. War is a spreadsheet with EBITDA rankings and quarterly reviews.

Good thread, I agree with everything you said.

Well? War is big and great for business....

I notice nothing in this post about the US military getting over 50% of the US federal budget. Congrats, you learned something this week.

Only if you tell yourself it is.

Oh, you mean how about $700 BILLION (with a B) annual (at least) goes into the imperialist war machine to the tune of a million slaughtered by it per decade?

posted on Jul, 7 2018 @ 02:52 PM
link
But if we aren't in foreign countries, some group may just come along like the taliban and try to destroy our poppy fields. Then where will our large corporate pharmaceutical companies get their opium from?

Think of the children man.....THE CHILDREN!!!

I wonder, if discovered that WWI & WWII were completely orchestrated and planned out years in advance, would that change anyone's opinion in thinking wars are necessary?


In general, wars tend to accelerate technological development ..Is it possible that if we were a peaceful species we wouldn't have developed technologies like microwave ovens or the Internet?

Well, like several others have said and yourself posited, war is really of nominal value. However, as an individual who has participated in the ugly art, allow me to perhaps, put up some valuable results of the ugly human invention of war.

Still not an art I embrace or encourage,I have seen not only tragedies as a causation of war, but some tragedies averted and tragedies ending in better endings than what otherwise would have resulted.

Having worked with MEDEVAC flights while in Afghanistan, I have been able to see young children get life saving treatment after being punished by their parents for reading a book, see girls are not allowed an education in some areas of Afghanistan.

The young girls and many boys, are often punished with boiling water until they have no skin left on their legs. I can't imagine the pain those children endured, but do know that because we were there that instead of dying painful deaths or surviving horrible scared, they received treatment.

Many, many everyday traffic wrecks, numerous, too many to count drug overdoses, bombing victims and gun shots unrelated to our war presence received treatment and survived because we were there, our hospitals and doctors there, or our MEDEVAC assets were able to get very quickly the injured to one of their own very capable hospitals.

Many people died everyday as a result of a really unnecessary war, I think we can agree on that. We can also agree that those deaths, did nothing for either of us, nor anyone else back home.

But least our selfish needs get in the way, I remember those lives we did change, many for the better, but sadly our presence changed many for the worst. But we did build new schools, hospitals, and provided clean water facilities where otherwise it would not have occurred because it was and largely still is a land of the forgotten.

So, no, war is good for nothing. However good things can come about because of it. It may not allow you to challenge computer titan Bill Gates, but perhaps a child will have a chance when otherwise they wouldn't.

Not willing to go charging into war for those small gains but I have learned that while I personally may not earn valuables that sometimes the gains were never meant for me, but I can look back now and realize we did gain small measures.