posted on Jul, 5 2018 @ 05:33 PM
link
Supposing that Oumuamua actually is a comet, then we may now be looking at the approach of the second object of this class. Comet C/2017 S3 has an eccentricity of 1.0000787, which makes its orbit hyperbolic. Its inclination is about 99 degrees to the plane of the solar system. This makes it very unlikely that it a comet from our own solar system, kicked into a hyperbolic, sun-escaping orbit by a close encounter with Jupiter.
Besides this, the object brightened suddenly on July 2nd by 16-fold, from magnitude +12 to +9. This comet is currently in the Northern constellation of Camelopardis, and will pass inside the orbit of Mercury in mid August. It could become as bright as +4 magnitude, making it visible to the unaided eye. There is a link, below, to an article with further information, including an image of the comet, which is quite green in color, and an interactive chart, which shows its path through our solar system.

Comet C/2017 S3 has an eccentricity of 1.0000787, which makes its orbit hyperbolic. Its inclination is about 99 degrees to the plane of the solar system. This makes it very unlikely that it a comet from our own solar system, kicked into a hyperbolic, sun-escaping orbit by a close encounter with Jupiter.

Neither a hyperbolic orbit nor a high inclination is an indication that an object is from outside the Solar System. In either/both cases there is nothing which precludes the Oort cloud as an origin. And I'm not clear on what Jupiter has to do with it.

With `Omuamua, it was its speed which made an origin in the Oort cloud an impossibility.


Comet PanSTARRS is falling toward the sun from the Oort cloud, a vast reservoir of fresh comets in the distant outer solar system. It has never visited the inner planets before, and, as a result, no one can say what will happen when its fragile ices are exposed to solar heat as it approaches the sun in August.

+4 is barely visible and if you're in a place with a lot of lights, forget it. But maybe it will surprise us.


Think you have your stellar bodies confused.

Oumuamua was confirmed to be a comet, Nature, Mysterious interstellar visitor is a comet — not an asteroid.

That PANSTARR designation is kind of confusing!


That PANSTARR designation is kind of confusing!


Someone should run it over to the Q thread.

And to go about and giving the thing a name. Now it will never leave! I hope you didn't feed it! We are not keeping it as a pet!!

So there you go. A name everybody calls it kind of like a pet. Then the "official" designation. And then there are times when they find out it a previous body and go back to that name (that dang spaceweather has got me a couple times with one!)

One man's potato is another man's tuber!

PS - I limit myself to one politico thread a week!

@OP, now that Oumuamua is a comet, and we found out that it is another object that is lighting up, what do you think is going to happen as it moves inside the orbit of Mercury later next month?

Oh, did you see the X-37B spotting on spaceweather??? That is cool stuff!!

At the risk of sounding paranoid, what + number is an ELE level type event?

IIRC, the last one went behind the sun (from our view) and never showed up on the other side. Maybe we get a free show with this one?

If it goes poof, wouldn't that kind of indicate Ort cloud object (mostly ice and rocks)? Oh, you mama!, survived a quick trip in and did not go poof. I don't even think it lit up. Which was all part of the mystery.

The magnitude scale is a rating of how bright an object appears in the sky. It has nothing to do with impacts.

… This 3d orbit diagram is a feature of our 3D Solar System Simulator and shows the orbit of Comet C/2017 S3 (PANSTARRS) with respect of the Sun and the orbits of the major planets. The position of Comet C/2017 S3 (PANSTARRS) and the planets along their orbits in this diagram accurately represents the current configuration of the objects in the Solar System. This is an experimental feature …


if the PANSTARRS Telescope facility presents a diagram of the Comet's Orbit... then it has been determined this is not another inter-stellar object… but might be jostled out of the Distant Oort cloud by Planet 9 Itself (my hype guess)


the slow-paced-moving graphic shows the orbit within the inner solar system only...

originally posted by: Phage
a reply to: Blue Shift
I never said it wasn't a probe.
Remember that.


When the antimatter beams start carving up the planet, I'll give you props.

The gas expulsion is the only model that fits right now.
(This "confirmation" rests on the idea that the dust, ice, and gas particles around Oumuamua are smaller than our sensors are able to detect. IIRC this means the grains are on the order of micrometers, in order to exist and have not been seen by us.)

Confirmed is a strong word, but, by Occam's razor I consent your viewpoint is the correct one.

Every possible natural explanation, until there are none left, no matter how unlikely. That's the correct scientific method for the question "Alien space ship?"

Would've been nice if we had a probe anywhere near it, as it zipped by.

The only way I'll get concerned about Oumuamua, at this point, is if it turns around and starts coming back...
(At which point, I call dibs on rounding up Bruce Willis, Steve Buscemi, Aaron Eckhart, Michelle Rodriguez, Tom Cruise, Emily Blunt, and Aerosmith.)*

posted on Jul, 5 2018 @ 11:05 PM
link
Since the discussion was on interstellar objects in the solar system, there is another one that has been confirmed, but its been here for 4.5 billion years:

I'm in no position to question their models but I've heard about problems with very long term orbital models. Turns out someone who knows more about it has the same question.

But Jewitt pointed out that it's difficult for such models to remain accurate as they reach further back in time. The model also doesn't take into account non-gravitational forces, such as the push an icy body may get when the sun warms one side, causing its frozen reserves to sublimate.

Part of the theory involves the proximity of the parent star as well. If it was close enough, the velocity of the object could be low enough to allow capture.


Even more discouraging is that at that time the comet will be near Mercury and the Sun, making observations practically impossible.

The brightest magnitude it will be observable would be earlier, when it's gonna be 8 to 7 mag, and low on the north-eastern horizon just before dawn. 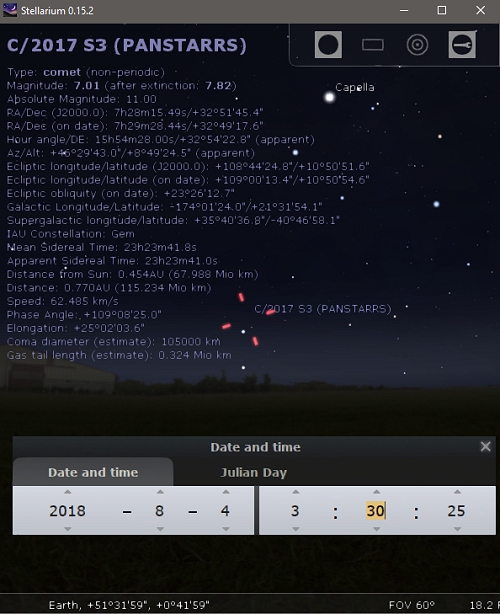 So, no, I don't think it will become a naked eye comet, unless you're very very lucky and have an exceptional eyesight.

Our best bet is to observe it in binoculars and telescopes at the end of July.
edit on 6-7-2018 by wildespace because: (no reason given)

originally posted by: Phage
Neither a hyperbolic orbit nor a high inclination is an indication that an object is from outside the Solar System.


Well, Oumuamua's strong hyperbolic trajectory with eccentricity of 1.20 is a clear indication of its interstellar origin.

C/2017 S3's eccentiricity of just barely above 1 points rather to Oort cloud origin.


Probably a leftover dinosaur butt probe, floating around in space, kicked into orbit by the Chicxulub impact.