Your best UK police brutality videos, all pretty lame from my youtube searches.

posted on Jun, 29 2018 @ 11:51 AM
link
I comment on US cop brutality threads quite a lot, it never ceases to shock me sometimes, so in the spirit of equal balance, please feel free to post your 'best' examples of UK police violence and we can compare with the 'best' we see on ATS from the US.
I'll go first, this one is lame as, mostly people resisting arrest and getting a few bangs with extendable batons, but it came top in my youtube search, oh and the guy in the still image is wearing a breathable anti-spit hood so he'd obviously been spitting at cops, I've never had one when I've been arrested... Anyway, if you have any better examples of UK police brutality please share them here. It's a pity US police get all the criticism, let's call out the brutal constables of the UK.
Hard to find any decent UK brutality though, I wonder why, we should have at least one sixth of the shootin' n taserin' vids on youtube compared to the US, just on population differences alone.

Seems kind of strange to start a thread about the "Best Police brutality videos" not sure what the angle is on a post like this? Is there a competition for police brutality? Hmmm maybe I don't get it...

posted on Jun, 29 2018 @ 12:12 PM
link
After the UK government banned popsicle sticks, it became a utopian fantasy land of marshmallow automobiles driving on rocky road ice cream, baseball bats made out of taffy, basketballs made out of chewing gum, and boxing gloves made out of cotton candy, and nothing but peace and harmony.

So how could you have any police brutality videos?

Just drawing comparisons because so many US members say it's just a numbers percapita thing problem there.
I'm looking to see if anyone knows of a good sixth of similar taserings n beatings on youtube, as one would expect based on population differences.
Just chilling on a friday night and interested is all, nobody is forcing you to read this thread.

originally posted by: IgnoranceIsntBlisss
After the UK government banned popsicle sticks, it became a utopian fantasy land of marshmallow automobiles driving on rocky road ice cream, baseball bats made out of taffy, basketballs made out of chewing gum, and boxing gloves made out of cotton candy, and nothing but peace and harmony.

So how could you have any police brutality videos?


Hahaha! That was brilliant!
Actually laughed out loud

You are trying to compare apples to oranges. The "Police" in Britain and Ireland are precisely that police, referees to use a sporting analogy, most are not even armed. In the States on the other hand, you have Law Enforcement Officials, hammers looking for nails to use a carpentry analogy. Do you see the difference? Also our cops are far better trained and don't go all Clint Eastwood at the slightest infraction.

I know, I just think of cops as referees, or more like bouncers at a nightclub, annoying sometimes but neccessary.
I've even helped cops out when they have been losing the battle for the right cause and only have their lame extendable baton.
Most people I know are the same....lucky to see a cop these days though unless someone calls for an actual emergency. 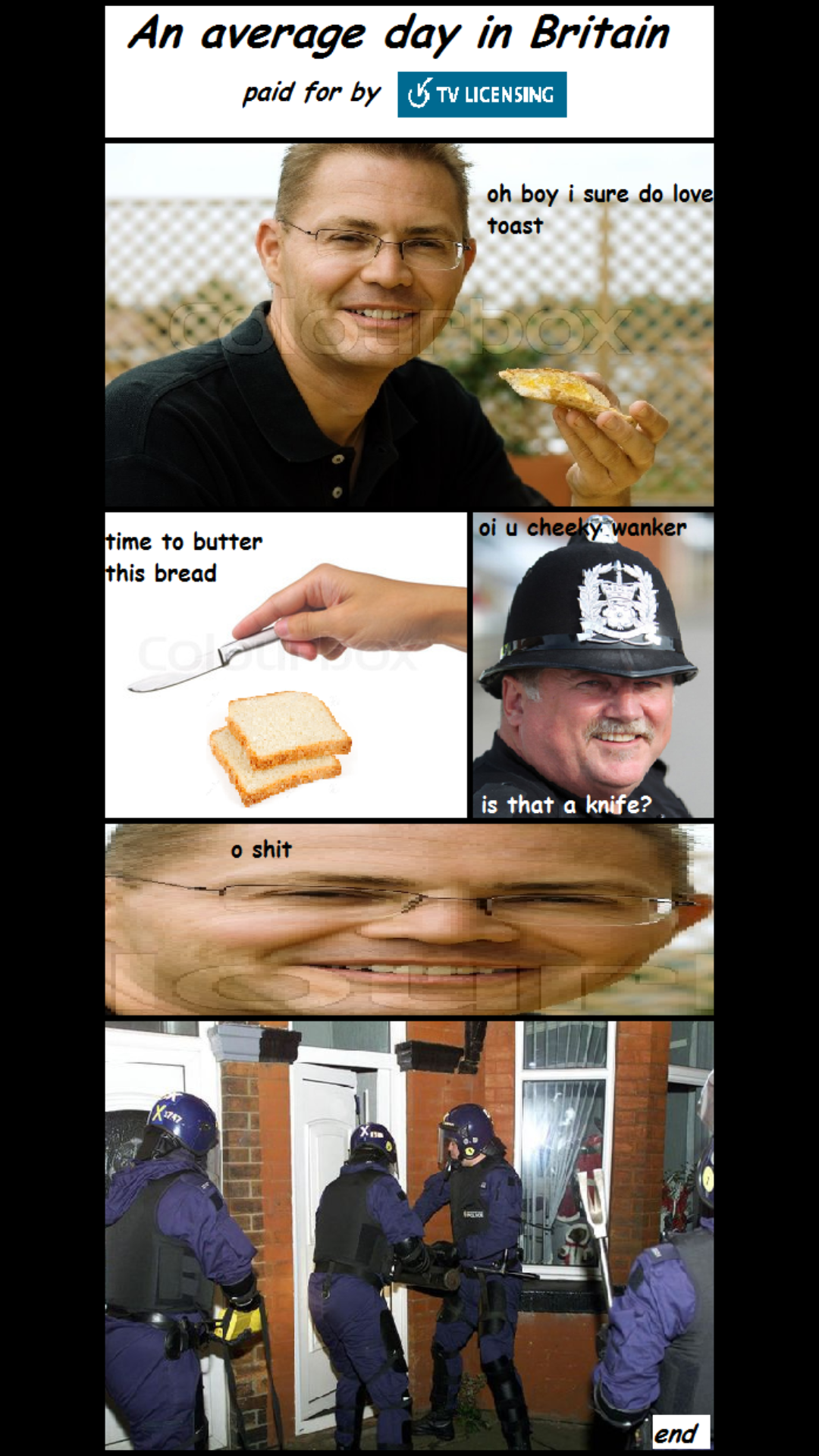 That was back in the day but I was too young although I know a couple of people who were there. The stories are horrific.
That was 80's Britain though, I had my first beating in a police cell in 1989, two cops holding me against the wall while another punched me in the stomach until I was sick. It was horrible.
It's all changed now though, degree educated cops, duty of care training, and importantly CCTV everywhere, from the cop car to the custody suite, to the cells. That has changed much, and I always wonder why US members think such CCTV to be a bad thing.

That has changed much, and I always wonder why US members think such CCTV to be a bad thing.

Although with the patriot act that's taken a piss.

If you don't feel safe enough, you can always throw some USD towards glock personal protection.

O.K., I'm not playing fair and I know that. Haven't even searched for UK Police violence videos.

But I just can't pass up this opportunity to ask an important question of the UK people on ATS. Well, two actually.

One: From watching a plethora of UK Cop shows and no, I don't include Midsommer Murders in that, but stuff like Scott & Bailey and the more modern stuff, I've made a weird observation!

Apparently, the way the criminal justice system works in the UK today.....the Crown Prosecution Service, referred to on the shows as "CPS", (not to be confused with the US "Child Protective Services"), won't even touch a case WITHOUT A FULL CONFESSION from the Perp! Smoking guns with fingerprints won't do..........gotta have a FULL CONFESSION! What the hell is up with that? In the US, Prosecutors get convictions on murder cases with nothing more than circumstantial evidence.

But wait, it gets worse from what I can see..........your Cops don''t or can't or aren't allowed to, what we call in the States, "tune up" the prisoner before interrogation! ("tune up" means rough treatment, throwing against the wall, punching in the face and kicking the prisoner when he's down and threatening worse to get to the truth). AND I never see plea deals, i.e., "you admit to this and we'll see you charged with a lesser offense."

So basically............when the DCI does an interrogation..........it GOES ON FOR DAYS until the prisoner finally becomes so bored out their skull they give a full confession!

Second question.............whoever the hell came up with the colour scheme for the squad cars? No insult intended, but US Cop cars are "black and white" for a reason..........they're intimidating! UK Cop cars, which are too small to do much in the first place are painted in garrish squares that make them resemble clown cars at the circus.

One last and I'll go away..........who the hell trains the tent people. You don't have a murder scene in the UK without the tent people; they put up tents in a damned flash.......huge white tents! Its amazing! There must be hundreds of Tenters working with the UK policing forces! Are they real cops or are they former circus workers familiar with quick erection and dismantling of those huge white tents?

CCTV protects the people from the state though, it's a two way street.
...and firearms are easy enough to buy from Eastern European friends, just expensive.
Pretty chilled place in my part of England though, low crime and friendly cops who have to be because they only carry lame extendable batons. The old wooden truncheons were worse in my opinion back in the day.

PMSL!!!
Brilliant post
The Crown prosecution service will only run with whatever they think they can win. I've laughed at cops in an interview saying 'no way the CPS are gonna take this case, you've got 17 hours left to hold me so I'm guessing you'll be releasing me in the next hour' The cops actually laughed called me a cocky bastard.
They can only hold you for 24 hours in the police station here then have to ask a magistrate for an extension, that is only murderers and rapists etc.
I've always been out in a few hours, they prefer less than 4 hours because they don't have to feed you then lol

EDIT
On plea deals, they do try it on, they offered me a caution or a fixed penalty in my story above, I said "No way, I'm going before a court and it's going to cost the state a fortune on a case I believe I will win" - they let me go
edit on 29-6-2018 by CornishCeltGuy because: (no reason given)

Uh huh. Counting on that when the state owns the CCTV.

I've been baffled how you people are some cozy with the damned thing. I've been wondering if ya'll replaced saying "hail mary" with saying "2+2=5", for getting that comforting solace feeling.

Honestly this post is lame as # rofl whiney mate

originally posted by: toysforadults
What are you whining about now mate?

Honestly this post is lame as # rofl whiney mate

Weird how it was friendly banter till someone with something lodged in their ass came around and ruined it.

Lol again, I have been saved prosecution in my life because the CCTV showed I was the innocent party.
I don't see the problem, the state has my picture, fingerprints, DNA, and knows where I live. Being filmed meh.

Hey our NSA only stares at us via our "phones" (pocket computers), not big towers of in your face racks of cameras, or the one hidden in the rock across from my driveway like you have, or the one in your trash bin (google: Bin Brother), and yada. And our NSkynetA watches you too anyways because you built it. And listens to you.