The Board Game at the Heart of Viking Culture

posted on Jun, 26 2018 @ 03:16 PM
link
Came across this and I thought i'd share. I'm a fan of board games and strategy games so it's always cool reading about games people used to play.

THE ICELANDIC SAGA HERVÖR AND HEIDREK is regarded as a key influence on classic early-20th century works in the genre, the 13th-century tale features dwarves, a tragic curse, a magical sword, and, perhaps most recognizable of all to fans of J.R.R. Tolkien’s The Hobbit, a fateful contest of riddles.

For centuries, Heidrek’s answer to this riddle has fascinated archaeologists and historians alike. “This is the game of hnefatafl,” he says, “the darker ones guard the king, but the white ones attack.”

Ubiquitous among Nordic settlements during the early Middle Ages, Vikings played the game on a checkered wooden tablet similar to the modern-day chess board. Once a relative mystery to researchers, archaeologists now believe it held immense symbolic and religious significance.

Over the past 150 years, excavators have unearthed large quantities of gaming material from Viking boat burials. Dating from the 7th to the 11th centuries, most of it consists of checker-like pieces constructed from glass, whale bone, or amber. These pieces range from ordinary discs to ornate figurines and are usually uniform in shape and size, save for one prominent king piece, known as the hnefi.

...until the early 20th century, few scholars differentiated hnefatafl from other contemporary board games. Early published editions of the Sagas relied upon wildly disparate translations of medieval Icelandic texts, which also confused the matter. Because the oldest extant copies of these documents often refer to the game as “tafl”—a Germanic word denoting “board” or “table”—translators regularly mistook references to it for generic allusions to chess.

Chess...dates to sixth-century India, and its origins are possibly even older. By the Viking Age, it had also reached Europe. Both hnefatafl and chess were played side by side. It is not always clear from early sources which game is being referred to, but double-sided boards are known with one side suitable for one game and the other for the other game.

It wasn’t until the early 20th century that historians realized the games shared little in common beyond a checkered board and a prominent “king.”

Carl Linnaeus, the Swedish botanist, encountered a game called tablut during a 1732 trip to Lapland, at which time he jotted down its basic rules. After comparing these rules to the game mentioned in the Sagas, it was hypothesized that “it is extremely probable that tablut is identical with the old hnefatafl.”

Tablut pit an offensive player against a defensive opponent. The latter placed a king piece in the central square of a checkered board and surrounded it with defenders. This player attempted to win the game by maneuvering the king to one of the four corners of the board. The game’s rules awarded the opposing player a superior number of pieces, which were placed in formation around the king’s defense. This player won by occupying all four squares around the king. All pieces in the game moved horizontally and vertically, like the rook in chess.

hnefatafl seems to have meant much more to the Vikings than its offshoots did to their neighbors and descendants. This is evidenced not only by its inclusion in boat burials, but also by where Vikings placed the material within these graves. The majority were placed mid-ship, but it depended on the size of the boat and the nature of the deceased. The symbolism inherent in this placement had less to do with where in the boat than where in relation to the body.

In many cases, Vikings placed a hnefatafl board on or near the deceased’s lap. Others seem to have placed gaming pieces on top of the grave itself.

Vikings may have seen this placement as “a means of assisting the transformation of the deceased into the afterlife or ancestral state.” These same Vikings, they added, might also have anticipated “future games, perhaps imagining a lordly lifestyle of gaming, feasting, and fighting in the next world.”

"In life, strategic thinking and fighting ability were fundamental to success on the gaming board and such success accentuated the status of a warrior; placing the gaming kit in the grave served to remember or commemorate that status and skill and to make it available for the deceased in the afterlife.” 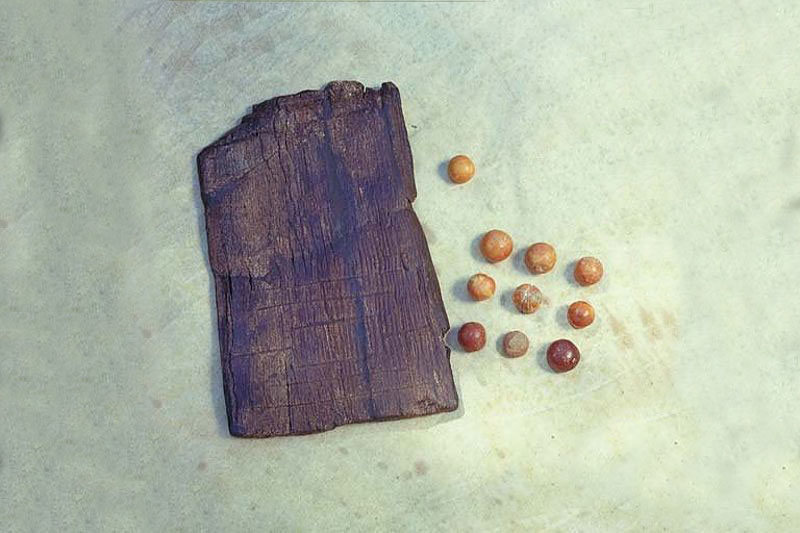 It's a long article, I tried to quote the important parts, I hope it's not still too long, but there's a lot more about the significance of the the game and more about the archeological digs that led to this hypothesis.

Personally I always wonder when they start attributing so much religious and symbolic evidence over things at burial sites. Honestly, sometimes I think the simpler explanation of...people like to play games and there probably wasn't a whole #load to do back then could explain why they find it everywhere. Either way, it's always cool reading about old games and just the general day to day things people in the past used to do. In a lot of ways it makes history feel more human, instead of always hearing about wars and conquerers.

It almost seems to be a re-enactment of a situation in England where Viking raiders ended up being trapped in a barn surrounded by angry Anglo-Saxon villagers. That siege lasted two weeks until a truce was made.

Oh cool. I'm going to check that out and read more into the siege you speak of. I gotta admit I don't know a lot about Viking and Nordic history but I like their mythology.

posted on Jun, 27 2018 @ 04:52 AM
link
Cool thread op... i did a study on ancient games a few years ago and it was truly fascinating. I don't believe I read about this one so this is interesting.

In my study I did go further back to the origins of when games evolved, likely from divination, tally's/counters, calendars, competition and strategy... all-though this remains debatable.