Is this the design of China's currently building aircraft carrier? 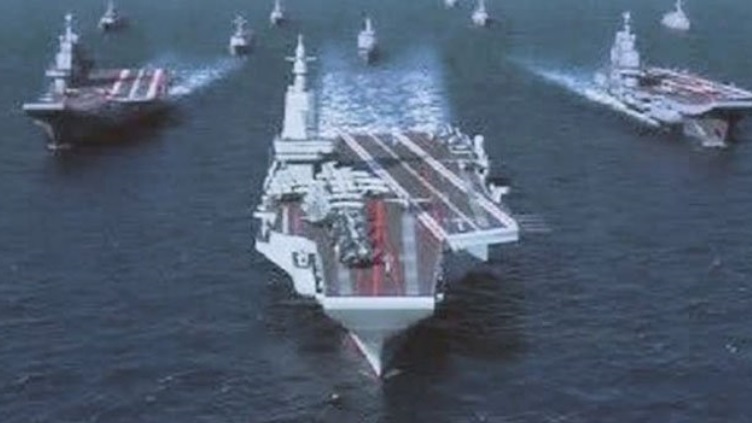 We at ATS' aviation projects have been discussing the Chinese aircraft carriers and their development for at least as long as I have been here (going on 3 years). The repairing/completion of the Liaoning (ex Varyag) and the construction of the "Shandong" (name not confirmed) took place at the Dalian shipyards. While the "Shandong" is undergoing final trials prior to acceptance, there is no sign of a new start on an aircraft carrier. This might be due to still needing the slip for the current ship, but...I don't think so. We may not see anymore of the CV01/01A class. Time will tell.

The third aircraft carrier is reportedly taking place at the Shanghai shipyards and will be of a new design (CV02). It's supposedly larger than the CV01 class and mirrors the American carriers, if smaller and probably (though not certain) non nuclear: it is supposed to have an angled flight deck, be a CATOBAR rather than STOBAR design and use either EMALS or steam cats. Imagery has been seriously lacking though and there have been multiple instances where the CV01A "Shandong" was supposed to get certain bits of tech that seem to have NOT made it to the actual design. We could see some of that here: rumors are cheaper than real design work.

The Chinese let out a recent image of what is claimed to be a rendering of the CV02 with the two other carriers (CV01 & CV01A designs). Unfortunately, it's not super useful for telling size or whatnot. It does seem to indicate some of the rumors (being patterned after American designs) are true.

Jane's thought it worth noting and discussing:

Jane's says the whole thing was deleted. However, China Times has come out to discuss the WeChat where all this came out:

There are two really interesting bits:

The analysis pointed out that since the 002-ship had been used for 28 months from the slipway to the water, it was more than half of that of the Liaoning ship. Therefore, it is expected that the total time-consuming of the 003 carrier from the slipway to the launch will not exceed 20 months. Based on this, if the 003 carrier is now on the ship's platform, it may be officially launched into the sea by the end of 2019 or early 2020.

Look at the construction start to launch times.

Target in this case being "ideal" or "goal" rather than a literal target practice ship.

But! The really juicy part is the 4th carrier is supposed to start shortly. The Chinese are calling it the CV04, which in their parlance, would imply a new design. They discuss a 100k ton displacement as well.

Note: China doesn't let its papers run off and do things like we do. This is a signal if not a probable reveal.

Oh and ObSnark: this is clearly NOT the chinese trying to build a power projection capable navy using carriers. This surely must be a massive battleship full of hypersonic missiles.


One of these days, if not already, every carrier from every country will be as good as obsolete in a global conflict because of missile technology. They are a big red bulls eye floating around just waiting to be blown to hell by a ballistic or supersonic missile.
edit on 21-6-2018 by CharlesT because: (no reason given)

Counter missile technology isn't sitting still. Everyone seems to think that only one side of tech is growing, while the other is sitting still. SeaRAM went 8 out of 10 during one serious of tests, that included supersonic targets. That was using single missiles, not the volleys that would be used in a real combat situation. They've successfully engaged targets up to Mach 2.5.

And besides, with drones we could design a submarine-drone-carrier that could pop out with 100s of aircraft anytime anywhere.

We could build one today with off the shelf material.

Imagine what you could do with the Navy's funding.

Yes but I think this is a question of utility vs cost.

What can I achieve with how much money?

These carriers will provide some propaganda and jobs but at what cost?

A far less expensive military program that serves greater utility and offers more flexibility would be prudent here in 2018.

The problem is the sub-drone carrier can't project power for extended periods. A carrier is an airbase that sits off the coast and provides an air wing bigger than many nations have. The CV01s were too small for that, but can make ok escort carriers (or VSTOL carriers once their VSTOL is done). The CV02 and CV03...well. That's gonna be interesting.

Folks thought the Chinese were not going to intervene like the US has. That was...very misguided. Even the Chinese have said that's wrong.

Every time a power rises, they intervene around the world to protect their interests. China is no different. As said by a wiser man than I: the future resembles the past as much as water resembles water.

They didn't have smart phones nor airplanes 200 years ago. The future represents great change and China is thinking very 20th century about all of this.

The 21st century is a whole new ball game. Everything we have is obsolete tomorrow.


I suspect because in a massive world war the first thing to be destroyed will be guidance systems salelight based technology etc, once the electronic eyes are gone a more conventional war will be fought....

And its your right to do so. My counterpoint is that tech has changed, but people really haven't.

The difference in firepower between even two or three smaller ships and a CSG, or even just the CVN is staggering.

A good example is the Maginot Line.

After WW1 the French were thinking history repeats and so devised the greatest line defense imaginable. Spare no expense.

The Germans were thinking of a war of mobility and flanking maneuvers based on the latest in military technology. The used a combined arms, flexible, blitzkrieg approach to nullify the Line into obsolescence.

A major future war will not be fought the way the last wars were.

I will wager that the carrier battle group concept in it's current iteration is quickly becoming a big old dinosaur money-pit.

In 15 or 20 years that carrier could get sunk by a mediocre military for under a million $ with average technology of the era.

Just to keep it relevant it needs constant upgrades and updates every few years, etc. That's very costly and limits the usefulness and makes it impractical.

And the Chinese know this.

The Soviets did, too.

And the British do currently.

And the French sorta do.

And the Japanese are getting warmed up again to it.

So does every other weapons system out there. They're constantly going through upgrades throughout their life cycle. Look at some other systems now compared to to those same systems even 10 or 15 years ago. They're totally different in some cases, but all of them are different.

It's always funny to read about how many people around the world in Plans and Operations are apparently totally clueless about current and future technology.

Blitzkrieg, meet the Mongols. The prior equivalent. Or the Persian Aswaran for that matter. Or the chariot prior.

The difference in firepower between even two or three smaller ships and a CSG, or even just the CVN is staggering.

Stuff like that.
Carrier strike group's way too expensive.

They're doing that. And the counter tech.

There are some things other platforms, as yet, cannot do. And carriers can.

It's always funny to read about how many people around the world in Plans and Operations are apparently totally clueless about current and future technology.

Though funny it's also disturbing too.

If information is power and knowledge can win the day, being clueless is a bad spot to wind up in.

They're doing that. And the counter tech.

There are some things other platforms, as yet, cannot do. And carriers can.

They only have X amount of funding per year and the US far outpaces them and is ahead of them, just getting further and further ahead.

This carrier is a boon doggle and will cost China dearly.

They could have invested in getting an edge in something but instead are blowing their wad on a freakin carrier group that'll never size up. Doh.

And those guys in those offices have a hell of a lot more knowledge and understanding of what's out there than the average Internet general and planner.
edit on 6/21/2018 by Zaphod58 because: (no reason given)