posted on Jun, 7 2018 @ 04:06 AM
link
In mythology Adam & Eve ate the "forbidden fruit" and discovered they were nacked. To me this is a metaphor, that they indulged something, which made them aware they are capable of thinking. The nackedness is the seperation from the animal.
Terence McKenna had a few very wonderful thoughts on that topic.

After that shamans, or druids and priests "learned to communicate with god in everything", be it the wind, the sun, stars, clouds, animals,... everything was a "higher power" communicating.
And it was in a way, this way we learned when it was time to plant and when the Nile would bring devastation and so on.
My suggestion is that every "consciousness-system" has a collective memory. 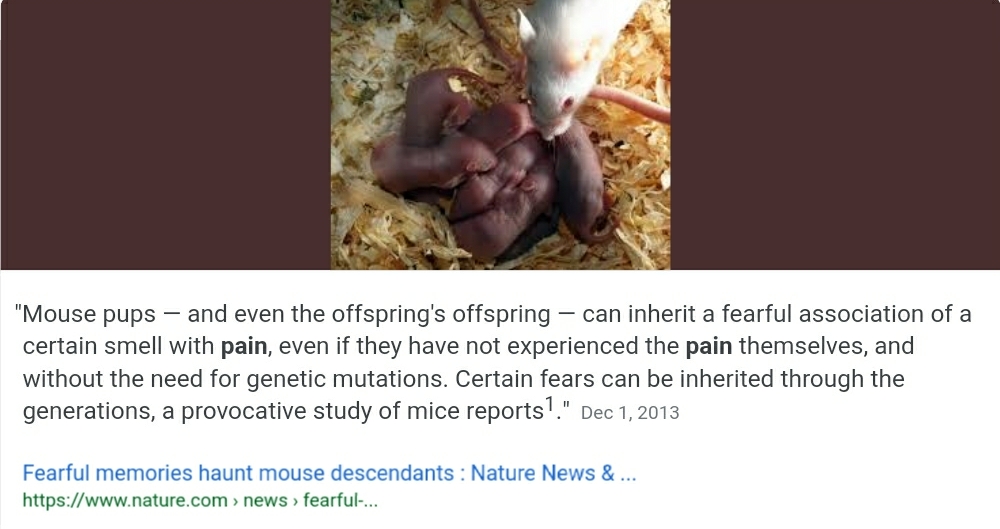 I think one can make the assumption that we inherit a lot more information relevant for our survival, than just related to pain & fear.

The first stone buildings were made for the Gods, for hunting luck most likely, if we take Göbekli Tepe, the pyramids, still miracles to many were built for Pharaos who often considered themselves Gods or at least descendants of them.

Many advancements we enjoy today would never have been made, if it wouldn't have been for the one or the other god.
And what are we doing today? Money has replaced this higher-power as motor for our advancement and we lost touch with nature. With our own "spirit". We lost respect for life.

Isn't it maybe time for a spiritual revolution? One that brings us "back home", away from the religious thought we are supposed to submit the world to humans, but instead focuses on a way how we can improve the "system Earth" running smoother, let it thrive towards more "alive" and less exploited and surpressed?

I think if we could accept and respect Earth as living being whose collective consciousness includes ours as one of many that could really help.
What do you think?

This is life right here and now but because 'Adam and Eve' bit into the fruit of knowledge they now missed this moment (that is life) and focus on 'something other'. Time and their death suddenly appeared and now there is a seeking for life - seeking to secure oneself as a separate thing from what really IS.

originally posted by: Peeple
Isn't it maybe time for a spiritual revolution? One that brings us "back home", away from the religious thought we are supposed to submit the world to humans, but instead focuses on a way how we can improve the "system Earth" running smoother, let it thrive towards more "alive" and less exploited and surpressed?


This is home - but the mind wants to improve 'things' like the Earth - so how can there be peace when there is a wanting for other than there is??

Every thing which feels separate is seeking home - when it is found that there is no thing separate - that there is just this that is - then that 'home feeling' will be unveiled.

It is thought which says there is other.
edit on 7-6-2018 by Itisnowagain because: (no reason given)

They realised they were - that they exist - prior to them realising that they exist they had no idea that they were naked!
A tree or animal is not 'self' conscious! They fear not how they appear.
edit on 7-6-2018 by Itisnowagain because: (no reason given)

It's difficulty lies in it's simplicity.

There is one mystery, yeah / I just can't express / To give your more, to receive your less.

The mind itself is the matrix. A journey of a thousand miles is beginning with a single step. The anger, the sadness, the fear is what is driving us on

...And he fell weeping and wailing at the gates of Kalimantan....and as he peered through the clearing jungle mist he saw an ancient city peering out through the roots of strangler figs

You might have read this topic I created some time ago, about a book called "the crisis of the modern world" written 100 years ago. www.abovetopsecret.com...
This book talks about the fact that we have "killed god", but we haven't replaced it with anything meaningful. We have removed the meaning that guided our actions for so many millennia, and now we find ourselves with just action that is not backed by any meaningful thinking. Aimless zombies.

There is also this topic in which I talk about a theory which states that the tale of Adam and Eve and the garden of Eden is actually a metaphor that tries to represent the transition from paleolithic to neolithic, in other words the rise of civilization and the separation from nature. www.abovetopsecret.com...
There is this art piece, recently shown in Paris, which is called Domesticator, which is a house with widows, but which also represents a man sodomizing an animal, maybe sheep. www.theparisreview.org... . In my opinion, it perfectly represents the relation that men have had with nature 12000 years ago and until now. Men started domesticating nature, by domesticating plants and animals, which made them become sedentary(which is represented by the house with windows). Nature was not seen as a partner or a mother anymore, but seen as something to exploit. Figuratively, men fu@#ed nature by exploiting it, and in the proper sense men fu@#ed animals with which they lived, they literally had sex with the animals that they bred and with which they had to live in close proximity. There is a very interesting message behind this art piece.

Thank you, that was a very informative and interesting answer.

It will take me some time to read through all of that.

I think it's experience relevant for survival, or which make the individual disfunctional, ie trauma that gets transmitted.


Do you mean they 'ingested' (rather than 'indulged') something - maybe some sort of fungi perhaps?

Adam + Eve were thoughts in the Mind of God. Incorporeal, immaterial and unable to do any harm, because it was not known. Their thoughts were known to God and he has managed every their thoughts, supplying them with all the needs they had, and thus they had no needs.

When the Bible tells you that they have eaten of the fruit of knowledge of good and bad, this means that they simply learned something that they should not learn.
The next thing what happened is, that they saw that they were naked. But here, the Bible, is referencing to their thoughts and not the nakedness of the bodies, because they were still incorporeal.

As they begun hiding their thoughts, God could not sort them for them, and thus they (adam+eve) started separating themselves from God.

And if you read carefully, you will understand that Adam fell into a Deep sleep, but there is no reference of his awakening ...
....


Anyway, because of the nature of the Eternity (being timeless, unchangeable and accessible all through the time), the Question is not "when did this happen", but WHO Adam+Eve are.

Haha, my original thread was different and titled "'Shroom" of course it got 404'ed, I'm very impressed by McKenna, obviously.

And here is a great Terrence Mckenna film, in which he speaks about the early man eating fungi and how it increased his likelihood of survival, among other things.

And whenever you say something I can grasp, you impress me again...
You weird or I am.

Thank you for the prompt to revisit Terence McKenna.

What a wonderful, beautiful soul. He said so many great, smart things. 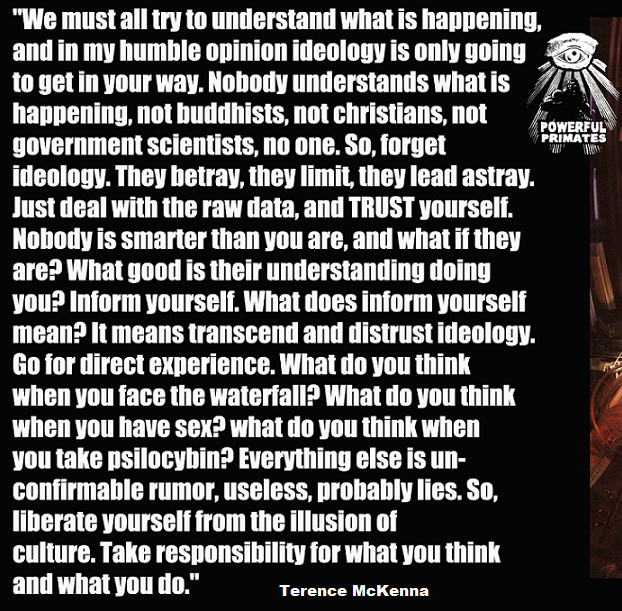 It's a shame his timewave zero failed, but the rest should have brought him a Nobel Prize.

Have you ever tripped shrooms with a bunch of stupid people before? They sound exactly like Terrance McKenna.

All the low capacity cherry picking.. "I dont understand so no one does we just need to waaaaahhhhhh"

Adam and Eve were immortal spirit beings. Put the kids drawings away! You're an adult now. They didn't even have exodermis when they entered their own anchor,the material realm. The first time they saw their formerly invisible, now flesh-a-fied inner workings
edit on 8-6-2018 by Prene because: (no reason given)

Learn to spell his name right, before you talk about him.
And because I was an ignorant dumbass like you once too, word of advice: don't call others stupid, if it's glaringly obvious you are.

Or they became fully conscious beings, awake. No longer animals lacking self awareness.

Awareness of time and the concept of aging and death would also produce the benefit of the beauty of life and how precious time is.


but the mind wants to improve 'things' like the Earth

Would you rather be living on the outskirts of a rubbish dump or in a home with a warm bed and toilet plumbing.
For your enlightenment you can always choose to renounce everything and go live near the dumpster.