What are the finest examples of craftsmanship in history??

No ship building is without skilled craftsmen.

I dont understand why you do this.

[The Telharmonium (also known as the Dynamophone) was an early electrical organ, developed by Thaddeus Cahill circa 1896 and patented in 1897. The electrical signal from the Telharmonium was transmitted over wires; it was heard on the receiving end by means of "horn" speakers. Like the later Hammond organ, the Telharmonium used tonewheels to generate musical sounds as electrical signals by additive synthesis. It is considered to be the first electromechanical musical instrument.

Cahill built three versions: The Mark I version weighed 7 tons. The Mark II version weighed almost 200 tons, as did the Mark III. Each was a considerable advancement over the features of its predecessor. A small number of performances in front of a live audience were given in addition to the telephone transmissions. Performances in New York City (some at "Telharmonic Hall", 39th and Broadway) were well received by the public in 1906, and the performer would sit at a console (see picture) to control the instrument. The actual mechanism of the instrument itself was so large it occupied an entire room — wires from the controlling console were fed discreetly through holes in the floor of an auditorium into the instrument room itself, which was housed in the basement beneath the concert hall.

The Telharmonium foreshadowed modern electronic musical equipment in a number of ways. For instance...
en.wikipedia.org...]

Check this out! Blows my mind!

posted on Jun, 4 2018 @ 11:49 PM
link
a reply to: JoshuaCoxThe Parthenon in Athens and Michelangelo's sculpture the Pieta.

I've always loved researching old ships especially those. I've been looking at some models online of 15th and 16th century ships to build and the good ones are about $600 to $700. But their absolutely marvelous.

posted on Jun, 5 2018 @ 01:35 AM
link
Perhaps the finest piece(s) I've seen, as an adult at least (been a long time since the Henry Ford Museum), were the what I surmise to be 'Royal Class' "Music Boxes" at the Mark Yaffee mansion of Tampa. This was some year ago now, but happened to "attend" a couple party's at that house (he lost it all last I heard). The house itself was about worthy of this thread (google it). As far as I know about it was / is the biggest most fancy pance mansion in the Tampa Bay area. Its in the most fancy pance neighborhood I know about, "Avila", and he bought something like 3 or so whole lots to end up with maybe it was 2 acres. All stone outside (and lots of it), all fancy woodwork inside and the 'lawn' all putting green grass lol (a full golf course stretches thru the whole neighborhood).

But then inside there he had a flipping museum of giant pristine "Music Boxes" (and 'diorama automatons'). Think 'juke box' but in like year 1890 or something, interesting no less is some of them were made by Wurlitzer. I had never even known about such creations as these music boxes, even though my old profession had me a sort of expert on jukeboxes.

They operated like "automatic pianos', but had metal cylinders instead. Dude built an entire room just for holding the vast array of 'songs' he had for the different sized pieces (some were seriously huge most peoples bedrooms would barely fit one), all fancy pance custom woodwork of course that room was.

The beasts essentially have a symphony of instruments inside them. Here goes one such creature: 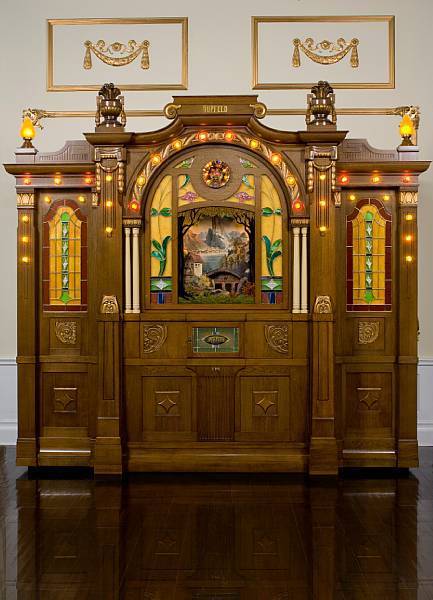 And an article about the collection:
www.artfixdaily.com...

The 'Diorama Automatons' where like framed scenes, 3D moving pictures. I had seen such devices at some point (probably Henry Ford Museum), but not so many like that and all mint.

Dude basically went all in just to have it all for a couple years, and let it all go. Gold dude and this was back in the housing boom / cash for gold period he was coming out of as he hit his peak with the ordeal.

Which means the person who designed the first Spanish galleon was a master artisan, but then they could be produced by people who were not artisans.

I wonder what the best stone workers on the planet would have to say about those 2 peices???


This is kinda a two part experiment lol..


First establish what the pinnacle of craftsmanship would be.

Then ask a modern master craftsman if he could replicate it.

I think it was Beethoven that started as an organ engineer??


Or maybe some bigwig scientist???

Anyway, he became a master in what was his side job was science or composing, but he considered his real skill designing organs..

Oh, organs, now thats an interesting thrust (those music boxes are organish, but instead more like automatic pianos but with a symphony of brass etc music instruments inside them). I actually got to look inside the two biggest ones, and the 'piano' sections were organ piped.

A couple sweet organs, worthy of the thread, I know about playing Hans Zimmer tunes now...

That's brilliant! Amazing its not all wore out from people just having to fiddle with it lol (or potentially even worse: being afraid to because its so fine). Reminded me of the music boxes thanks.

posted on Jun, 5 2018 @ 02:49 AM
link
Forget all that garish bling. It sparkles, but is just that. Sparkles. That stuff is meant to overly sell itself and make you feel important.

Give me simple, perfect, often overlooked little industrial design examples any day. Granted, there isn't just one of these, but there was before they made more...

The Swingline Stapler. Solid as can be, no fills and perfectly designed.

The Brannock Device. Don't know what it is? It's that weird little thing they use to measure your feet when you buy shoes. Chrome and black metal, simple genius perfection.

Swing-A-Way Can Opener. Colored rubber handles to accent the rest of your house color choices. Rock solid. And a bottle opener on the side!

Those change holders that the ice cream man used to use (technically called a 'coin changer'). The ones that attached to a belt and each one of the sections had a little lever at the bottom that dispensed one coin one at a time. They had cuts in the metal so you could see how many coins were left. These couldn't have been any more perfect.

originally posted by: okrian
Forget all that garish bling. It sparkles, but is just that. Sparkles. That stuff is meant to overly sell itself and make you feel important.

With that attitude, just Buy China. And find your whole society becomes throw away with the goods.

Make / restore some fine stuff of your own, then come tell people they should only aspire towards stuff spit out by slave labor (whether it be of the human or machine variety slave labor).

Not to snip on frugality. I'm as frugal as we come. But I've also 'dabbled' in making / restoring / inventing fine works.

posted on Jun, 5 2018 @ 06:24 AM
link
The Pylos Combate agate found in the Griffin Warriors Tomb is pretty amazing.

originally posted by: pavil
I'd also put Coral Gables on that list. One man built it and no one knows how he did it.

I think this and maybe the kaufri(??) statue in Egypt that is just insanlyvwell carved are the two I find to require the most artisan craftsmanship.

I think it may be referred to either way..


Maybe the builder named it gables but marketing renamed it castle...


Either way I ran across an interview with an old friend of the original architect and he said the architect would have been furious with all the esp stuff....


“He was from the generation that when they wanted to do something hard. They did it the hard way with blood sweat and tears..”

Including modern day as long as it was done with hand tools, what is the finest examples of craftsmanship in metal and stone working in ALL of history??


Are there swords from ancient history that literally no one on the planet can replicate?


Are there statues from history crafted by artisans so skilled that no one today could ever hope to achieve the same results???

I just wonder what is considered the finest example of craftsmanship in history and if the artisans of today could match it??

Oh. And the Sistine Chapel, and the below ground level churches carved from solid rock in Ethiopia.