Democrats add the low unemployment rate to their campaign hitlist

So far they are against:

Pelosi Statement on May Jobs Report

“Republicans’ cruel, cynical health care sabotage campaign is already spiking families’ premiums by double digits and pushing millions off their coverage, according to the nonpartisan CBO. Big Pharma continues to hoard the benefits of the GOP tax scam, using their handouts to further enrich executives and shareholders instead of lowering prescription drug costs for seniors and sick kids. At the same time, the President’s reckless policies are exploding gas prices, wiping out the few meager gains that some families should have received from the GOP tax scam, as wages remain stagnant.

and she knows how to use Tvvitter too!

posted on Jun, 1 2018 @ 10:55 AM
link
They are still using the flawed way of recording the unemployment rate as they have over the last decade or so. But even then, this rate is better than it was before. I think they should actually fix the unemployment rate to get it a little more accurate. There are way more people working now and job openings now than there were two years ago. They still do not pay a living wage, but at least there is now a little tax break for people from Trumps tax break, saving even five hundred is a big boost. When a person makes twelve grand a year after taxes and expenses to live cost ten grand, the extra five hundred bucks is a big increase in money they have to go out and do things they like or buy something to treat themselves without having to go into debt.

Nancy is disconnected, she has been rich all her life and cannot comprehend things properly. She should not be in that job.

Unemployment rate means nothing. What does matter is the purchasing power of the take home pay of the worker making the median wage. As long as the corporations use analytics and deep data mining for fixing prices and keeping worker's wages low the economy will not improve in a meaningful way.

"There's a reason" why the economy will never improve in a meaningful way:

Oh, and this little gem:

posted on Jun, 1 2018 @ 11:09 AM
link
So here is my thought on the Nancy crazy lady quote. If Trump is offering them something to incentive lowering costs and it's being abused maybe it's time to go on the attack against the abusers.

Nothing new around here.

So I see. Would love to dive back into the world of ATS, but there is marked lack of effort around here beyond treating each other like garbage and trying to get a rise out of others. No progress can be made when people aren't willing to listen or actually use their brain cells. I expected more... though I'm not entirely sure why.

I completely agree with you.

I've yet to see evidence that the policies are actually working. If you have evidence that would change my mind, please present the evidence. Democrats aren't addressing the actual problem with the unemployment numbers any more than the Republicans are. Which is that people are generally underpaid, don't have much in the way of benefits, and struggle to get full time hours. You can have all the jobs you want without managing to stimulate the economy. Quality will always trump (not meant as a pun) quantity. Full employment means nothing if the consumers can't purchase what they need.

Tax reform as it stands is not going to be effective. It's a bastardized Keynesian style tax plan that would possibly be effective in a time of economic collapse. When the economy is already reasonably stable and healthy it won't matter much and could muck with the current economic growth. If any of this ends up working out... cool, but I personally don't believe it will.

But the point of my original statement that directly addresses this thread topic.... opinions of the administration's policies and opinions of socioeconomic issues facing our country are mutually exclusive. It's like saying if you don't like Guacamole, you must hate all people and cultures that dig on avocados. The logic doesn't track.
edit on 1-6-2018 by Osiris1953 because: simple typo

That is truly what matters. If the consumers don't have the means to consume the economy stagnates.

The "hit list" that is a creation of your own imagination? In your mind, job creation and lowering unemployment started somewhere after Trump's inauguration. The reality is fewer jobs were created in 2017 than in each of the last six years of Obama's presidency. The reality is that for all the wingnut screeching that Obama was destroying the economy, unemployment was 1 point higher when Trump took office than it is now.

With your skewed perceptions, you undoubtedly see Trump as having "saved" us from "destruction" — as some sort of drastic turn away from disaster. So of course you see her comments as not joining in your undeserved celebration of Trump and therefore being anti-low unemployment.

Since you brought up Twitter, her "we can do more" take on the jobs report is actually pretty consistent with what she said under Obama: 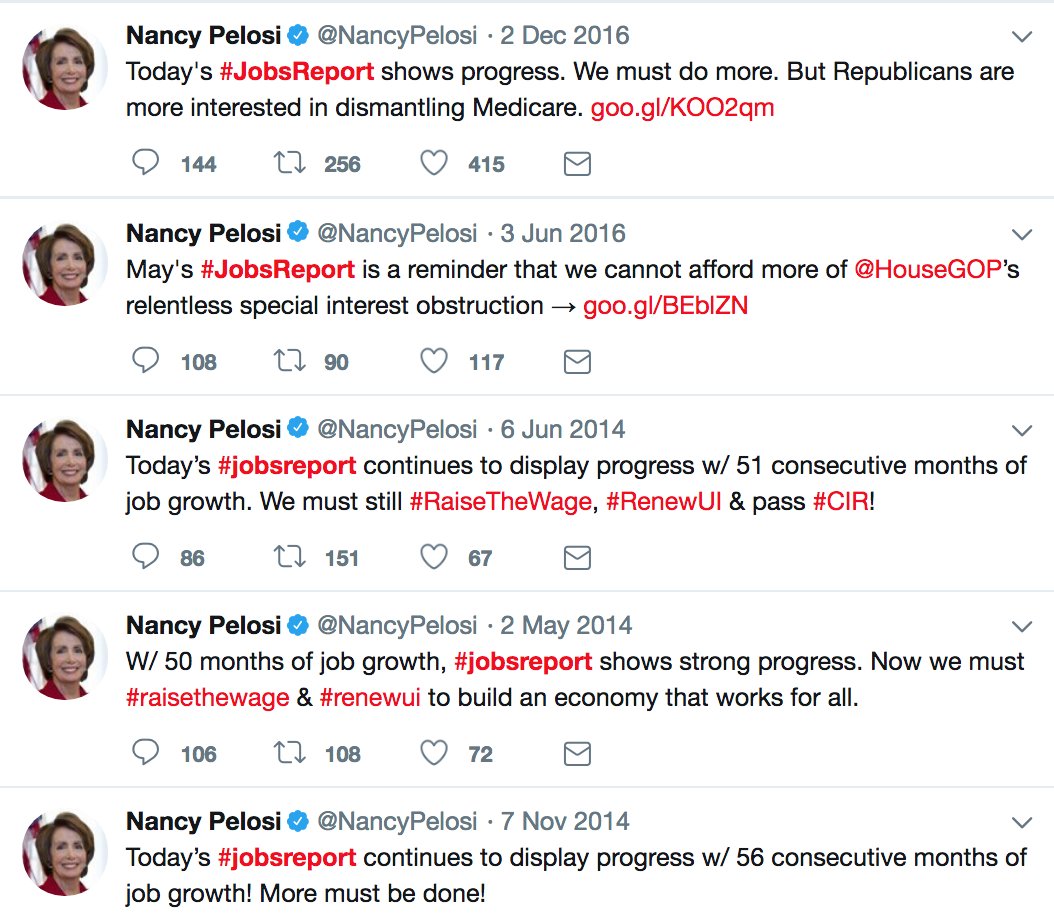 It's about what you'd expect given her position.

Anyway, your "hit list" take is garbage and also hypocritical given your own response to similar job growth and reductions in unemployment year after year for which you gave Obama no credit. By your own standards, you must have had low unemployment and job creation on your own "hit list."

In 2014, the last year for which Census data are available, median household income was $1,656 lower than it was in January 2009, when President Barack Obama took office.

Nancy's Plantation Politics is getting unpopular.

And She's having trouble.


There should be at least 100 "doctors" that can provide their mental assessment without meeting with Pelosi directly, and then people can hem and haw about their 'confirmed' and super 'legit' assessments, with no regard to ethics....

Samantha Bee had a word for women like Pelosi, but it escapes me at the moment... eh, maybe it will come to me later.

Your complaint isn't about labor, employment, or wages. Its about inflation. Its about the piss poor job the Federal Government has done protecting the value of our currency, allowing it to wither and rot in our pockets.

I earn almost twice what I earned in 2001. My lifestyle is nothing near as good as it was in 2001 with those doubled earnings. It isn't a problem with employment, or earnings. The problem is inflation. Which is a fancy word for "The money we pay you with is rotting when we pay you".

Evidence of this: a dollar thrown into a savings account in 1972 would be worth less than a nickel today. And we tell people to save for retirement, as if that actually works. I'd buy into notions like 401k's, if regulations over the markets would be implemented to stabilize the markets.

Its a handbasket to hell...and we aren't even pointing at where the real problems are: fractional reserve, and the rotting effect it has on our currency.