The Value of Sorry 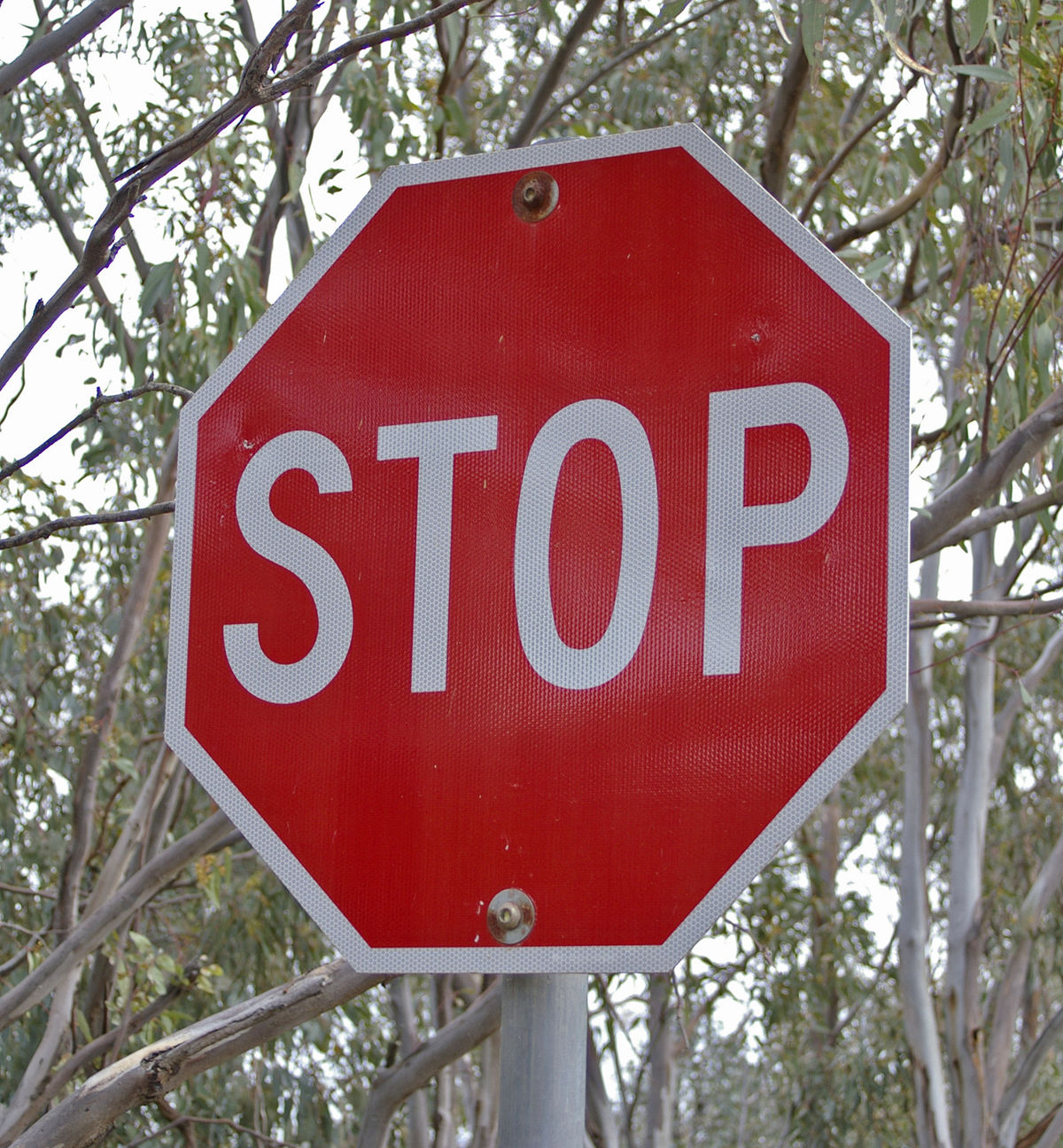 The logic of the stop sign is simple. Perhaps, if you're a rebellious one, you might not like the whole idea of regulation; such an attitude is present in many beliefs, and is trafficked quite 'naturally' by the promotion of hedonism; but if someone you love were to get hit by a car at an intersection which, quite obviously requires a stop sign to protect pedestrians, the whole experience of losing a loved one, of losing a cherished attachment object, can very easily reconstruct how it is you relate to the idea of a stop.

Lets try and analyze what is regulating what in your brain. The brain is a "big correlator"; it doesn't simply correlate with the outside world, but is also fundamentally tethered to homeostasis dynamics in the body, as well as a mutual regulation of every single memory that is formed within the system.

This latter idea means 'every memory influences memories that are functionally relevant to them'. This can seem overly complex, but when you have a brain to look at, and neural connections between regions to analyze, it is absolutely stunning what you can understand about the behavior and nature of how the mind emerges and how it works.

This all too important term, from the Greek for "steering", refers to the way all biological systems - and indeed, perhaps all coherent systems - regulate themselves through feedforward and feedback behavior. 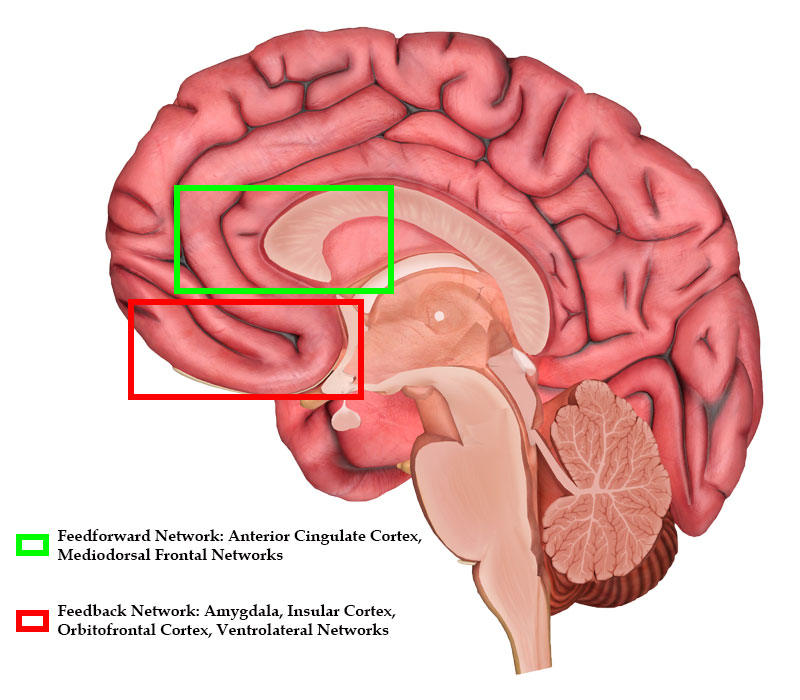 The above diagram refers to the feedforward and feedback regions of your brain, which together create, moment by moment, your experience of being a self.

I say "self", rather than consciousness, or mind, because the latter two concepts are abstractions of what humans actually live: a self.

The brains feedforward networks are centered in the hippocampus, where it moves forward into the anterior cingulate cortex, and then into the medial dorsal cortex. All three regions (except the hippocampus, which is slightly lower) are roughly captured within the green box - as in "green for go". Conversely, the brains feedback network is centered in the amygdala, which is in a sort of 'triangular' relationship between the amygdala/temporal pole (which supplements threat memory), the dorsal medial nucleus of the thalamus, and the orbitofrontal cortex. This network is the 'stop' - the part of your brain which literally embodies the objects in your environment and 'what they mean'. They tell you when to stop; it tells you, when you happen to play with the thought "Imagine I said, "there's a bomb in the room!", not with a "no", but with a big affective 'oomph' - something that stops that thought dead in its tracks, simply by changing heart rate and producing a veritable feeling of fear, as in "nevermind - I won't do that'.

These constraints are logically symmetrical to external situations. Conversely, the feedforward network is composed of those positive attachment states of your self which seek expression in the world. The narcissist, such as a person like Donald Trump, likely has a smaller ventral corticolimbic feedback system for the simple reason that he seems to do whatever he wants, whenever he wants to do it. In all prehistorical human societies, such a tyrant would be either murdered or banished.

In anycase, the feedforward system projects your 'wishes' outward onto the world. The psychodynamic phenomenon of projection is evidently based in this rudimentary behavior of the brain - the feedforward prediction, or motivated projection, of what you cognitively believe 'to be the case'.

All of this, so far, is for the purpose of recognizing the utter insanity of not wanting to live in a world where "no", or "stop", or "I'm sorry", are supposed to exist.

Before the human mind emerged, stop and go, feedforward projection and feedback constraint on functioning, has been the rule. Homeostasis, also, is a more primitive cybernetic system, so that, in effect, the regulation were seeing between ventral and dorsal brain regions is emerging out of electrochemical dynamics that resemble the 'feedforward' and 'feedback' behavior of the brain.

The very basis and root of our being emerges out of concepts like 'stop' and 'go'. For us humans, we go, as a rule, because we like the way it feels. But when it comes to stopping, or recognizing that you shouldn't do some things because 'it isn't right', or, in terms of brain function, is incompatible with my awareness of cause and effect, and therefore, of "justified" and "non-justified" action. This is something that can be distorted, and largely through the influence dissociation and idealization; or, the suppression of internal systems which tell you "to stop", and the effects of these energies, suppressed and 'spread' through the body, on subsequent behavior.

Psychodynamically, we see these emergent properties in resentment, jealousy, contempt, rage, irritation, etc. These emergent properties, taken by us as such inevitable 'traits' of being human, are actually, in all probability, the emergent product of the way external relations with others (we were all babies once) over activated our threat systems, which, of course, is another way of distorting a system; the constraint system is registering a threat: but this time, it is not your brain that fails to 'stop', but the brain of another person. The Human brain, a mirroring system par excellent, picks up and simulates as a rule; if another fails to 'constrain' and stop, the brain on the receiving end, for good evolutionary reason, will experience a hyper-arousal, and then, of course, a huge "stoppppp" - as in, "don't relate anymore with this person".

If it keeps happening, tragically, the constraint system produces 'developmental trauma', or 'complex-PTSD', a far more common condition than commonly thought (most people haven't even heard of these terms).

The world doesn't have to be a scary, evil, hateful, or false place. The 'falsity', or whatever falsity that can be imagined to exist, is the brain of the traumatized individual, and the confused, depressed, mismatches that continue to form between itself - within itself - and the world on the outside.

Saying I'm sorry is an appeasement, sort of a capitulation in an emotionally dynamic situation. I'd say sort of like mental restitution for a past infraction.

If a women says sorry I don't want sex, while someone is thinking about forcing sex on her, it's not an indicator to "stop". It's a wishy washy response that seems to indicate uncertainty. If the women says no, it's an indication to stop the advances. In a no situation, if the person continues to force the advance, a 9mm with a small stop sign should stop them in their tracks.

No wishy washy progressives, sjws, narcissists, sociopaths, psychopaths or potential rapists were harmed in the making of this post :-)

posted on May, 29 2018 @ 11:29 PM
link
Good thread. The universe gave rise to such primitive feedback nervous/neural system as a way for the organism to respond to the outside world and eventually things got more complex with time. Sorry doesn't feed things and doesn't fix them either. It's a cop out what matters is the subsequent adaptive behaviour which should be modified to resonate with the laws of the universe.

We still retain primitive neuro feedback mechanisms such as fear which is built into organismic systems for a reason of survival. But as we evolve we will get rid of this eventually from our system or maybe not could be replaced with a different response.

posted on May, 30 2018 @ 07:24 AM
link
"I'm sorry" is a worthless phrase. Rarely are the words uttered by someone who actually feels regret, guilt, shame. It is a way of smoothing over the edges of a broken thing.

Take a plate, and throw it onto the floor. It smashes into a thousand pieces. Saying sorry does not fix the plate, and the plate will never be the same as it was, again.

Sorry is an empty word. BEING sorry, is not. When you actually feel the regret, shame and guilt over an action done. Yet sometimes, even being sorry is not enough to hold that plate together. so many broken plates. so many...

It would have been great to cover the reflection of "sorry," that is, forgiveness as a response.

posted on Jun, 4 2018 @ 01:32 AM
link
During the thought processes...there are very specific parts of the body that are highlighted...and continue to function based on this thought evoking process..

Much like acupressure..when you touch certain parts of the body..others light up..as if in one dimension..and in an instant..

This is the complete recipe for homeostasis..That you understand the modes that the body is in per instant..