posted on May, 29 2018 @ 10:11 AM
link
In Norway, volunteers collected garbage on the beach. Then they received a 100.000 NOK ($12.200,-) bill for getting this garbage removed. If someone collects garbage even for free, they'll still have to pay for this garbage to be removed. This will result in more garbage, as nobody wants to pay to work for free. Why can't the State pay for this? I suspect Norway is not the only country with this practice. IMO, this system is... Garbage!

posted on May, 29 2018 @ 10:15 AM
link
That is something they need to take up with the government of Norway. I thought Norway would have garbage pickup like that as part of their economic system. I just lost a little respect for Norway's government system. Maybe the people doing that kind of pickup should have approached the government ahead of time and set things up. Maybe it is a lack of proper communication.

posted on May, 29 2018 @ 11:38 AM
link
a reply to: Hellmutt
Are there no trash cans on the beach in Norway?? Or a big dumpster that the facility staff empty those trash cans into?
I frequently clean a handful of local parks with the kids and my dog when we want to go out for some fresh air. I carry a bag, and a grabber and a wagon. I usually collect about two bags worth, but I just take them to the dumpster up front or the ones in the back if our trek ended there.

I need a better understanding of how the sanitation system works in Norway to really figure out what happened here.

I am adding the translated page so that I can read the story.
Voluntary garbage picking can cost you thousands of dollars
edit on 5-29-2018 by worldstarcountry because: (no reason given)

I don't know whether there are trash cans on the beach in Norway. I assume there are at least in some places. I know there's a lot of trash in the ocean. There has been some focus on this in media lately, and I guess that's triggered these volunteers to collect this trash. Many shops and businesses have banned certain plastic products recently, as a result of this focus. These plastic products includes bags, knives and forks, cups and straws. Even with trash cans, many are not using them. I've seen this also in other countries.

originally posted by: Hellmutt
In Norway, volunteers collected garbage on the beach. Then they received a 100.000 NOK ($12.200,-) bill for getting this garbage removed. If someone collects garbage even for free, they'll still have to pay for this garbage to be removed. This will result in more garbage, as nobody wants to pay to work for free. Why can't the State pay for this? I suspect Norway is not the only country with this practice. IMO, this system is... Garbage!


This sounds like a very reasonable fee for the HAULING and DISPOSAL of trash. Sure the LOCAL government could have waved it but why the upset.

In the US, in my city, citizens paid the cost of trash HAULING and DISPOSAL. If you want to take a truck full of trash to the dump, the minimum fee is about $50.00 and that is exclusive of the Hauling expense.

It doesn't seem at all unreasonable to me.

posted on May, 29 2018 @ 12:32 PM
link
They do have an excellent plastic bottle recycling system. Many homeless benefit from this system, collecting bottles to make a little money.

Britain recycles just over 50 per cent of the plastic bottles used, compared to 97 per cent in Norway

posted on May, 29 2018 @ 12:36 PM
link
a reply to: Hellmutt
So what I read in the translated version, is that when a group of citizens such as the one mentioned seeks to clean the waters they have to make arrangements for the disposal. According to one image, 400 kilo's of waste rubbish was recovered from the area. When you originally said beach, I assumed those nice sandy Florida beaches I am used to full of people with trash cans every 100 feet or so, and big main dumpsters up by the roadway.

This appears to be more like a marina area with a rocky shoreline, not so much a beach in the traditional sense as I know it. So that was part of my confusion. Now, I do so a nice what appears as a small commercial district in the distance there in one of these shots. I would assume some of them have dumpsters that a truck comes by to collect, but I do not know for sure. In any case, these people were recovering serious weight in rubbish. This was not a walk in the park with kids picking up chip bags, napkins, empty beverage containers and the occasional shoe.

They were gathering mostly waste generated by commercial or private marine activity, such as nets buoys, rope and even tires! Seeing as its Norway, I have no doubt the tires have a destination for recycling. But somebody has to get them there.

For the volunteers to just pick up tons of trash, and drop them off and expect somebody to scoop it up free of charge is a bit presumptuous though if you ask me. In every volunteer clean-up I have been a part of , including coastal clean ups with Tampa Bay Watch, it is on us to make arrangements to dispose of the garbage. We don't just leave it lying there and expect that someone will get it. 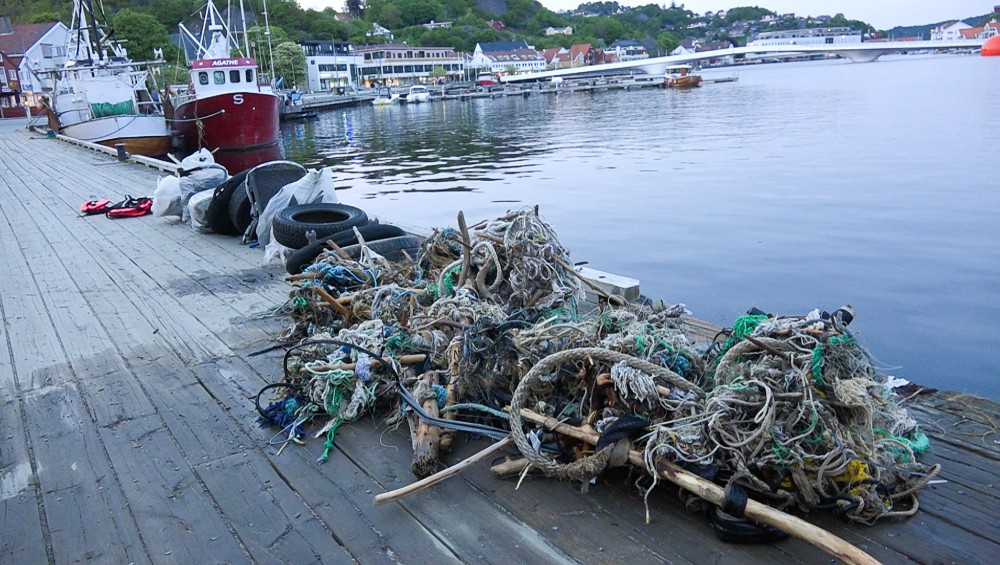 This marine litter was picked by volunteer enthusiasts. They had not agreed to the pick up in advance and therefore risked a luscious bill from the renovation company. 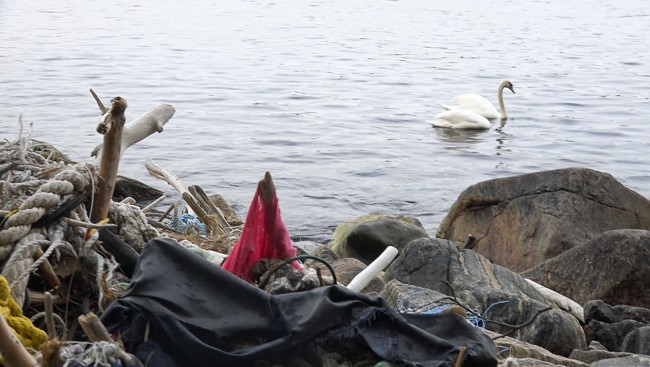 If you find trash by the sea without creating a cleaning action in advance, the garbage can not be retrieved free of charge. This trash was found in a bay by the sea sand in Mandal in the Pentecost. Photo: Rolf-Ørjan Høgset 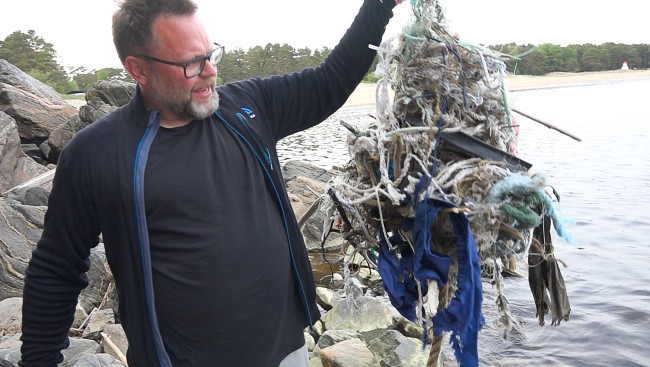 Rolf-Ørjan Høgset was out to "plow" (pick rubbish and jogging at the same time) when he and someone else came over 300-400 kilos of rubbish, including a lot of ropes, at Sjøsanden in Mandal.

Now, lets assume that was me. It is nice that I would take my time to clean up the environment, as I do like to do actually. But it becomes myresponsibility to dispose of that once I have recovered it. I don't think I have ever recovered even 100 pounds of waste in one trip to the park, so I can easily take my bags of recovered rubbish and throw it into the dumpster.

But what these people recovered would require like either a several cubic yards container or even a roll off to fit it all. Most businesses and parks do not appreciate you filling their dumpsters to the brim with rubbish that was not from their location or generated by them. The only real problem here was that they failed to create a plan of action for proper disposal. Had they done so, all the costs would have been covered for the most part as the agencies involved, from what I read, have a system in place for just such events. I would never take my bags of garbage, and then place them on the sidewalk or wherever and expect somebody else to come get them free of charge.

posted on May, 29 2018 @ 01:55 PM
link
a reply to: gortex
Really? So if some good Samaritans cleaned up the streets on your neighborhood, but left all the bags on the sidewalk in front of your home, would you still be thanking them??? That is the equivalent here of what they did.

Im not knocking the effort, but if you don't have a plan for disposal, they technically did the same thing the people who left the garbage in the water did. They simply relocated the garbage from the rocks to the docks. Seems a bit half assed to me. How about just take what you can to the trash, and if the trash is full you setup an official clean-up for later where there is a plan to remove as much waste that is recovered as possible.

They're taking rubbish out of the water which has to be a good thing , discarded fishing nets are particularly lethal.

The money involved in the government taking their share of the effort is minimal and they should support the endeavour of people who give their time to help clean their environment.

What a opportunity missed for a bonfire and a sing along , i would recommend night-time when all the gov.types are in bed ps i nearly burned down my next door neighbours home when i did a burn up after tidying his garden