Donald Trump just put the 'Me' in his Memorial Day tweet

I believe that some of you would gladely offer your daughters and wifes to Trump. That's how far out some of you are.

I'm sure some of them would go so far as to offer themselves. My good lawd.

Didn't take long for someone to deflect to Obama.

I think he just enjoys triggering his haters.


A lot of Trump supporters are vets. You really think that's a good idea? Speaks volumes about you.

originally posted by: Southern Guardian
a reply to: matafuchs


originally posted by: Southern Guardian
a reply to: matafuchs

Now that is an internet winning response right there. Cheers to you sir.

originally posted by: Southern Guardian
Christ, why couldn't he just focus on what the day is about? For once stop praising yourself. 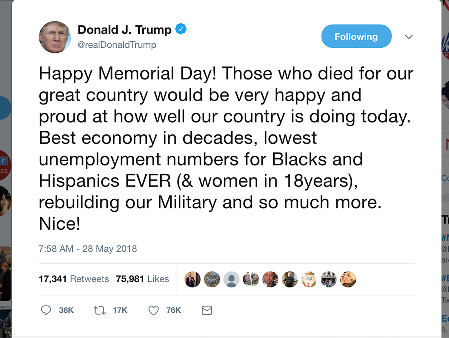 He has plenty of other days and plenty of other opportunities to post tweets putting himself on a friggin pedestal. Memorial Day is NOT one of them. He is the president of these United States, he's supposed to set a damn example.

This is a tweet about Trump masquerading as a tweet about Memorial Day. The remembrance of those who fell in service to the country is used here by Trump as simply a launching pad to tout accomplishments during his first 16 months in office.
Need evidence? Ask yourself if those who died for the country did so while thinking about the current unemployment rate. Or how a family mourning someone lost fighting for the United States today would react when the President ends a tweet allegedly honoring their service with this: "Nice!"

His tweet certainly angered a good number of veterans including a veterans group:

“This is the most inappropriate #MemorialDay comment that a @POTUS has ever made,” VoteVets tweeted on Monday.

"Cadet Bone Spurs" is a nickname given to Trump over his multiple Vietnam War draft deferments by Sen. Tammy Duckworth (D-Ill.), a veteran who lost both her legs while serving in Iraq.

VoteVets was responding to Trump's morning tweet, in which he said fallen service members “would be very happy” with how the country is doing today.

Where does he get off doing this stuff? He's running a muck and nobody in his administration seems to be putting thinks under control. Jesus Christ for once be respectful and focus on others. Memorial Day is an American holiday, observed on the last Monday of May, honoring the men and women who died while serving in the U.S. military and it should be acknowledged as such, ONLY for that reason. Other politicians such as Lindsey Graham kept focus on the DAY and what it is about. Other presidents have done the same. Trump can't seem to get a hold of himself. No respect for others and no respect for the highest office of the land.


Trump's tweets like this are examples of what Psychologists refer to as "narcissistic supply". Anyone who wants to know more about it can start reading here:

But I'll give an executive summary.

The concept was introduced into Psychology by the Viennese Psychoanalyst Otto Fenichel in 1938. (I mention this simply to illustrate that this is NOT simply an example of name calling against Trump. Narcissisim has been well known and studied by modern Psychology for at least a hundred years or so.)

Narcissistic Supply describes a pathological or excessive need for attention or admiration from codependents that does not take into account the feelings, opinions or preferences of other people. Freud thought that a certain amount of healthy narcissism was necessary for normal personality development. Basically, young children need to feel that they are "good", worthy, and valued. Competent parents intuitively recognize this need and that's why they engage in exaggerated praise for their kids-by praising them when they take their first steps, or learn their ABCs, or finally get toilet trained, etc. Kids who don't get that from their parents will engage in various tactics to satisfy that need. Some engage in "ingratiation", where they try to make themselves more likable. Others engage in aggression, where they essentially demand that the people around them praise them all the time and recognize their magnificence. This personality style can turn into sadism when the child grows up. Guess which style Trump is?

At the childhood level, this is essentially a neurosis; that means that the child is emotionally wounded, doesn't really have the ability to work through it the way an adult would, and so the strong emotions that the child is experiencing get "frozen" into the personality, at that point in time. The child can't work through it and can't let go. If the child happened to be in an environment where the adults in his/her life could help him/her heal from the emotional wound, then the child can let go of the toxic emotions and develop normally. Since it is usually the parent or parents that caused the wound in the first place, that rarely happens. If the neurosis persists indefinitely then the child's personality grows around it as the child matures toward adulthood; it becomes a permanent fixture of the personality. However, it is still essentially infantile in its emotional structure. This is one reason why, when someone is engaging in narcissistic supply, people observing the display respond by saying, "grow up". When a narcissist is engaging in characteristically narcissistic behavior he/she is typically about 4 years old, emotionally, at that moment.

A person with a normal adult personality can and will sometimes engage in egotistical behavior, but they can choose not to do it if they want to and can apologize for it afterwards. At this point in his life, Trump cannot do either of those things; it is who he is.

As Psychological research has continued, it has become clear that Narcissistic Personalities cluster together with related psychopathologies. These are grouped together in the latest Diagnostic and Statistical Manual of Mental Disorders (DSM-5) and referred to as Cluster B personalities.

Ah! So that's how they got communism to be somewhat swallowable to the pleebs in Russia... they convinced them that "our" actually means "me."

originally posted by: Metallicus
Trump never passes up a chance to trigger you Leftists, but you still fall for it every time. Thanks for the lulz.

So absolutely tired of this completely unamerican approach. There is only one side of this equation that revels in dividing and finds happiness in ginning up anger on the other side.

I would call this borderline traitorous. This is the United States. Even if we don't all see eye to eye, we are all Americans. Trying to anger, and enjoying the anger in your fellow Americans is the furthest thing from American.
Trump is a traitor to the United States, and has culled a not-at-all silent minority to join him in his gleeful dividing of our country.

A united country stands behind their President. Pretty simple really. If he fails to perform to their satisfaction they can elect a new one in four years. The majority of conservatives sucked it up and did it for Obama (don't even try to claim he took a fraction of the crap Trump has), but somehow we are the ones sowing division by supporting the man elected to the office while you rally for "unity" in overthrowing him? Sounds pretty bass-ackwards (and treasonous) to me.

I honestly don't see any evidence in the tweet that he claimed he was responsible for the good things that he outlined.
He simply said that things are looking good for our country.
As his tweets go, this was fairly good.

Next we should see a thread where you and your butties are outraged over his orange tint.

But as long as you are all occupied with this, all is well.


And there it is: The moment I turn around and crtitique the Trump method, now I'm to be smeared as being part of the butt hurt liberal brigade.

The selective amnesia ye partisan types exhibit, all of you, makes me embarrassed to be a Homo sapien.

Anyways, I'll be saving this one for the big thread I eventually post showing lefty's & righty's alike trying to smear me for being the other team for daring to rock the boat. 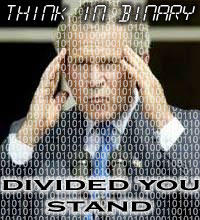 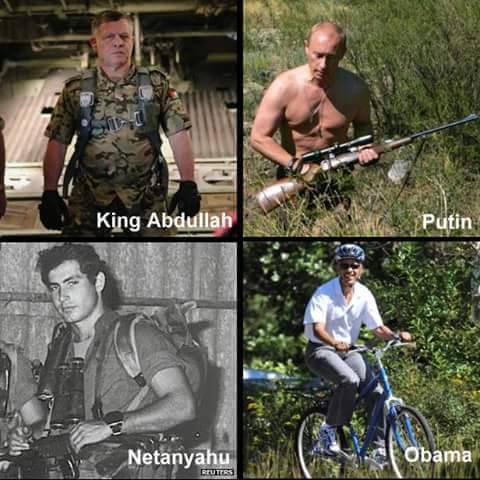 posted on May, 30 2018 @ 01:56 AM
link
You should hang your head in shame, buy a Trump doll, kiss his feet three times, say three hail Mary's and you will be absolved of your sins.

Although the official procedure is:

5. Get an official Trump Hairpiece direct from the factory.

And then I'll be absolved of my sin.

nothing separates the whining cry babies from the real hearted fok

take your gender fluid nonsense and go stand in your safe places... let the adults do the real work

Nothing spells out adult like a dude whose daily mission is to upset his critics into fits of sniffling and shivering.

Nothing spells out adult like a dude whose daily mission is to upset his critics into fits of siffling and shivering.

siffle? or was that a typo for stifle?

its like the kid who cries when mom doesn't give him chocolate.. eventually people see you for who you really are!

And there goes you now trying to smear me as being the other team for daring to critique this dudes petty BS.

Were you referring to the "whining cry babies" who are constantly crying "but Obama...", and "but Hillary...", or the ones crying about Trump?

As far as I can tell, those who support anyone just because they have an "R" or a "D" next to their name perfectly mirror each other. It's gotten to the point where there's nothing left but snowflakes populating and supporting both parties. That's probably why the majority of Americans politically identify as "independent", and party membership is bleeding-out on both sides.
edit on 5/30/18 by redmage because: (no reason given)