Now here's the kicker. In the state of Louisiana, a convicted felon found with a firearm is... A mandatory 10 years. Having a firearm while a convicted felon AND committing a crime - up to 20 years each instance. Not only is this strike 3, the guy should have been put away a long time ago for the crimes he did commit. That way, he wouldn't have been out to commit the other crimes because he would have been locked up and serving the time he should have served. Ultimate system fail!

Now see the following story and tell me what you think. Is the problem with gun laws or is the problem with the judicial system that releases dangerous criminals? Where I stand, you can make all the laws you want but it wont stop a criminal from getting a gun and using it to commit more crimes....


JENNINGS, LA (KPLC) -
A Jennings man has been arrested after barricading himself and a hostage in a residence, according to Chief Deputy Christopher Ivey with Jeff Davis Parish Sheriff's Office.

At approximately 5:50 a.m. on Sunday, JDPSO responded to a hostage and barricaded subject with a firearm on South Cutting Avenue in Jennings.

Ivey says the hostage was released at around 6:10 a.m., but the barricaded subject stayed inside threatening to come out shooting or commit suicide.

The suspect surrendered to deputies at around 9 a.m. after pepper spray was deployed into the residence.

Frederick Kelvin Mixon, 35, was arrested for violation of a restraining order, criminal property damage, possession of a firearm by a convicted felon, aggravated assault with a firearm, and remaining on premises after being forbidden.

This one is a true facepalm for me because this is minutes from my home-town in the same parish and I know how things go down there, from first hand experience. I see how the system just lets idiots go like this and do stupid crap time after time without giving two $#!^s what happens after.

edit on Wed May 23 2018 by DontTreadOnMe because: trimmed overly long quote IMPORTANT: Using Content From Other Websites on ATS

Drugs are banned, and we hardly have any drugs. The War on Drugs was won.

We started a War on Terror and there's hardly any terror left.

Laws are never broken. When a law is written or someone never breaks it. Bans work, because nobody ignores the law.

Geez, it's so simple.

the problem is with both
the laws and the system

Everyone knows the third stike law is racist AF

If we, as society kept him in jail and didn’t recognize his human dignity and that white privileged caused 3 of his 4 arrest, then we failed as a society.

The 4th arrest is because Trump is president and he’s just a straight up racist....ask Don Lemmon

posted on May, 23 2018 @ 06:24 PM
link
I suppose the philosophical question is, if a law is passed criminalizing something that a guy has done in the past legally, was the guy always a criminal, or did the law make him a criminal?

Of coursse one major problem has always been that the gun control advocates ignore the gun laws already on the book are rarely enforced to the fullest extent.

I think I read that the Obama admin only prosecuited like one or two percent of all attempted illegal gun purchases.

This proves the motivation is less about keeping criminals from committing crimes with guns, and more about eliminating guns for even law abiding citizens to have.

Can you see the contradiction in your statement?

1. Do you 'value life' above ALL things?
2. Do you mean 'human life'?
3. Do you value 'innocent' life more then 'non-innocent' life?
4. Innocent or not of what exactly?
5. If you 'value innocent life' above 'all life' then your statement is non-sense, meaning it doesn't make any sense whatsoever.

See, do you really value all life or just some, self-defined as innocent in this case, life.

Beyond just the logical contradictions, there is the presumption of being the arbitor of 'innocence'.

posted on May, 23 2018 @ 07:32 PM
link
Our Judicial system is not doing what it is supposed to do, that is the problem. I know cops who put away people for doing serious offenses and the people do a month in jail and are released because a deal was made. They can't get the really bad people off the street, yet don't pay your parking tickets and you can spend a month in jail with the same penalty as the drug addict that robbed three camps and stole guns from one of the camps.

We need to fix our judicial system and that requires better judges. If they legalize pot, that will make a lot more room in the jails for people who are actually bad. If a person is high when they do a crime, we cannot give them a reduced sentence if they say they are an alcoholic or drug addict, the people have to be taught they are responsible for their actions no matter what.

posted on May, 23 2018 @ 08:51 PM
link
You know..'I really don't know what it is with america and crime with guns...I dunno if more gun control would change anything. The gun laws here are more restrictive than america but it's pretty easy to get a gun. I know a few people I could get one from fairly easily and cheaply and I could get pretty much whatever I wanted. Or I could just order something online from the numerous shady internet dealers that will sell me whatever guns I want. I know several people with illegal firearms...and some of these people are #ing idiots....i also know responsible gun owners who own many guns who have gone through the effort of getting the proper licenses and training for them. There's definitely shootings...there's been at least 10 people killed with guns in my city this year and god knows how many people have been shot. I've heard gunshots around myself before and pretty sure i've heard some dude get shot. But it's still not the same as the level of violence in most American cities.

I dunno maybe it's the attitude of people...apart from the criminals...which are likely the same as those there...and the people that whine about guns being bad...most people just see them as tools. For hunting or defense against wild animals or even for home protection...but there isn't an overwhelming paranoia about guns. Whether it's needing to have them or assumming everyone has them or just the thought that you might need to shoot somebody before they shoot you...this isn't and overwhelming prevalent thought people have in their daily lives.

Personally I like guns. I learned to shoot them and be responsible with them and any kind of dangerous tool when I was young. Ivbe had proper firearms safety training and the only reason i've never bothered getting a license is because i've never felt like I had the enough money and time to devote to it properly. Someday i'd personally like to own at least a nice rifle and shotgun...but anyway...

I dunno gun violence in america is one of those things I really just have no idea where the problem is....banning guns definitely isn't the answer...I really agree with the right to own guns and the purpose behind America's second amendment...but I dunno...you guys need to stop shooting eachother so much I guess...
edit on 23/5/2018 by dug88 because: (no reason given)

posted on May, 23 2018 @ 09:09 PM
link
The USA dominates a global market worth more than $70 billion a year in the global arms trade.
Arms deals are a way of life in Washington they are number one in gun control.

Fear and anger also generate a lot of revenue—upwards of $16 billion, in fact, for guns and ammunitions manufacturers.
Every time they want gun sales to go up, all they have to do is start a false flag debate.

Years of congressional gridlock and bipartisan compromises is worth billions $$

As long as racist police and criminals are armed, I will be too.....

Maybe look at the things that have changed in that time.
Here's a hint.
It's not the guns.

I would say the problem is with the approach of making criminals miserable and giving them no hope for the future. It's all well and good to say that someone who commits a serious crime should receive more time than he got but the fact is that he WILL be released eventually unless he gets a life sentence.

So. The guy spends 20-30 years locked up and being tormented and kicked around and then he is released. Now I dunno but this does not seem like it's going to end well in the majority of cases. First of all, the guy had problems with violence and criminal inclinations to start with. So your solution is to torture the guy for 30 years and THEN turn him loose? Do you really think he's going to be better after that?

Now don't get me wrong. I'm not saying nothing should be done at all. I'm just saying you should probably try thinking about it rationally instead of emotionally. It's fine to be angry at a criminal but at the end of the day, they still exist. They are still a quantity to be dealt with even if you lock them up and throw away the key.

But no. The penalties for breaking most of the laws we have on the books (even some relatively serious ones) are not life sentences. Meaning that these people ARE going to be back in society someday. Whether it's next week, next year or in 30 years. Makes no real difference. It's one thing to say the guy didn't come out different than he went in. But if he actually comes out WORSE than he went in, something is wrong with the way we're handling that.

Set your anger aside for a minute and think about it. What are we trying to accomplish with the system we have in place? Are we really trying to prevent more crime or are we just trying to get revenge? Now of course it's an understandable gut reaction to an inexcusable act. Sure. I get that. Will revenge change this person? Probably not. Or at least if it does change them it will probably change them in the opposite way of how you'd want them to be changed if they moved in next door to you after spending 30 years in prison.


This proves the motivation is less about keeping criminals from committing crimes with guns, and more about eliminating guns for even law abiding citizens to have.

We're not supposed to blame all Muslims for terrorism, all Blacks for gang violence or paint all Hispanics as illegals, but it's fine to blame all gun owners if something happens.
Well, I got news for 'em... 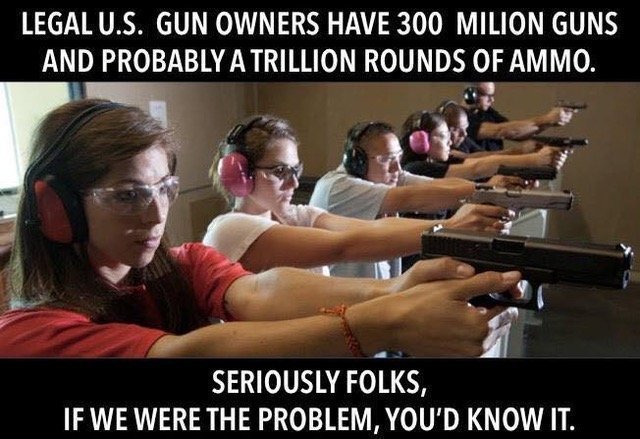 
I agree mostly,don`t think poachers or target shooting in a prohibited zone deserve that,lol, seriously,violent criminals should get a quick trial and a quick firing squad instead of 20 years on death row.Repeat offenders are a failure of the justice system
.