Roger Stone's inability to keep his story straight with the press should make Mueller's questioning entertaining. Roger has both claimed to have talked to Assange and Gucifer II, and then denied doing so.

Collusion? Absolutely!
edit on 5/19/2018 by eriktheawful because: fixed link


Exactly, quoted for truth! He’s a despicable human being who I can only hope will face judgement sooner rather than later.


It's not gateway pundit. Always a plus.


The proverbial "noose" has been tightening around Trump associates for a long time, according to the gullible media. How tight can it get?

I guess those that have already been indicted and some pleading guilty don't matter to those who support Team Trump. Can't wait for this investigation to be over.

I found this hilarious:

The Okaloosa County GOP says it's uninvited Roger Stone from its annual dinner next month after he made disparaging remarks about former first lady Barbara Bush, calling her a "nasty drunk" and other things.

It's amazing how quickly they all ostracized him after he was exposed for the NXIVM link -- including his long time friend, DJT. Apparently he said Barbara Bush was a drunk and if they cremated her she'd burn for three days.

And this is the first time this man has said something nasty in the last 30-40 years.

What's more likely to be true is that all these people know what he's like and they fully believe the allegations regarding NXIVM and they're trying to put as much distance as they can. Which is interesting to me... here's why.

Remember Roy Moore and how all the republicans stood up for him and the president defended him? I imagine that is because they have no link to him, he couldn't bring them down if it all turned out true.

With Stone it's a different story, they all run as far away as possible, including the president who pulled a 180 on this one. Most likely, that's because they know it to be true or believe it's possible, and he can bring them down as well.

The president defended some Roy Moore guy he doesn't even know, but he won't stand up for a longtime friend? I wonder why. 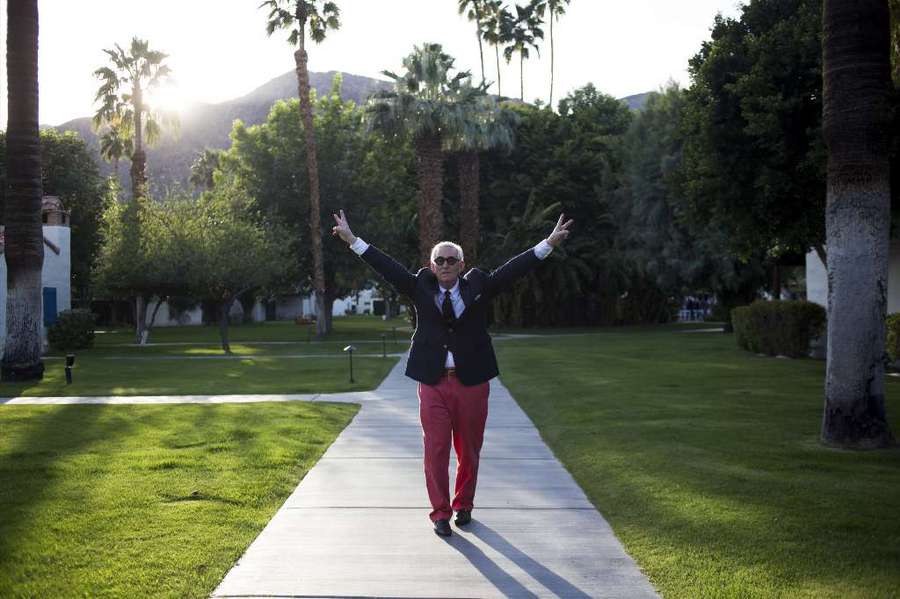 Do you really wonder why?
Donald trump has no friends. Just people he uses until they are no longer useful.

If this was Alice in wonderland Roger Stone would be the Mad Hatter.

Why do some find him so despicable?

The subpoena was recently served on John Kakanis, 30, who has worked as a driver, accountant and operative for Stone.

Kakanis has been briefly questioned by the FBI on the topics of possible Russian interference in the 2016 presidential election, the WikiLeaks website, its founder Julian Assange, and the hacker or hackers who call themselves Guccifer 2.0, one of the people with knowledge of the matter said.

Mueller has not scheduled a grand jury appearance for Kakanis, the person said.

WikiLeaks and Guccifer 2.0 each published emails and other documents from the Democratic Party in 2016 that U.S. intelligence agencies say were hacked by Russian operatives in an effort to tip the election in favor of then Republican nominee Trump.

In an emailed statement to Reuters on Friday, Stone said he believed that Mueller’s scrutiny on him stemmed from “misapprehensions and misconceptions” created by the media, and that he would ultimately be exonerated of any alleged wrongdoing.

“I sincerely hope when this occurs that the grotesque, defamatory media campaign which I have endured for years now will finally come to its long-overdue end,” wrote Stone, one of Trump’s closest political advisers in the years before he ran for president.

During the 2016 Republican primaries, a Stone political action committee paid more than $130,000 to an entity called “Citroen Associates” for “voter fraud research and documentation” and “research services consulting,” according to Federal Election Commission filings.

The subpoena handed to Kakanis is the latest development suggesting that Stone, an early Trump backer whose reputation as an aggressive political operative dates back to the Watergate scandal of the 1970s, is being looked at by Mueller.

Reuters reported earlier this week that FBI agents working for Mueller delivered two subpoenas to Jason Sullivan, a social media and Twitter expert who worked for Stone during the 2016 campaign, and that agents told him Mueller’s team wanted to question him about Stone and WikiLeaks.

Some of Stone’s comments during the elections have prompted questions from investigators in Congress, and others, about whether he had advance knowledge of the Democratic Party material allegedly hacked by Russian intelligence and sent to WikiLeaks founder Julian Assange, who published it.

Stone, including in an appearance before the U.S. House of Representatives Intelligence Committee last September, has repeatedly said he never got any hacked emails from Assange or WikiLeaks or Russians, and that he never passed any hacked emails to Trump, his campaign or anyone else.

Mueller is investigating whether Russia meddled in the presidential election and if Moscow colluded with the Trump campaign. Both Russia and Trump deny collusion.

Other Trump associates who have been questioned by Mueller, including former campaign advisors Sam Nunberg and Michael Caputo, have also been asked about Stone and WikiLeaks.

originally posted by: Kharron
Damn, I hope you guys don't vote for people based on how good they are on pretending?


originally posted by: Kharron
Damn, I hope you guys don't vote for people based on how good they are on pretending?

Oh ok, good, then we're on the same page.

Because for a minute it sounded like you were basing it on how cool he looked on a youtube video.