posted on May, 19 2018 @ 04:49 AM
link
I've been with her 15 years now. We have had our ups, we have had our downs. She has broken my heart, made me madder than hell, even put me in hospital. I wouldn't ever be without her though, you have to forgive the odd foible just as they have to forgive you yours.

It started on the outskirts of Birmingham, I saw her (as many do) on line, and yes, it's easy to say that we all try and choose the picture that best shows our good points and hides the bad, but in the flesh....She was close to flawless. The old fella was there, concerned I would treat her right, not let her down, not just ride her and dump her for a younger, prettier model.

Three and a half grand and a cup of tea later, I was pulling out of a garage forecourt, grinning like an idiot at the torque of the twelve hundred cc V twin. Yes, this was the first dance with my Harley,

A few miles later, I coasted into another garage, the motor dead, all the lights off...Murder on my mind. I am the sort of biker who always has at least a couple of wrenches and a screwdriver with me though and I almost laughed with relief at the loose battery terminal connection. Thirty seconds and it was tight again, the side panel back on and she roared back out towards her new home down south.

God she was loud. I mean REALLY loud. Shorty, straight through pipes spitting flames whenever the rev counter climbed over five thousand rpm. “Red Shift cams, Wiseco forged pistons, Carillo rods” He had told me...and boy did it feel like it. She tore through the moderate traffic on the M5. Three lanes of banality usually, but not today, only occasionally dipping down to legal speeds whenever there was a camera or a suspicious looking car.

Two miles from home, the crazy vibrations of that fat V twin managed to shake the right foot peg loose so that it turned and folded up under the weight of my leg. You ever tried holding your leg out in front of you for 5 minutes? By the time I got home my quads were shaking and I was sweating like a bookie watching the favourite hack up. Anyway, I swooped into the drive and kicked the stand down, leant the bike over....then, much more slowly, pulled myself out from under her and lifted her up off the ground. The kick stand needed to be pushed an impossibly long way forward to lock out. Another lesson learned, but at least I'd forgotten about how much my leg ached.

Fast forward a few months. Bright sunshine, miserable traffic crawling along at a pace slow enough to keep me using the clutch and my left forearm pumping up to Schwarzenegger proportions. The light gloss of an earlier shower glistening on the road. Two fingers caressing the front brake as the car in front of me stopped again. BANG. The whole world went sideways and gods, but my right knee hurt. I couldn't actually get out from under it. The big, silver bowl of the air cleaner cover had pinned me under the weight of her by my knee. An old fella lifted her up and I slid out, stood, fell down again as fire speared up from my knee through my thigh. My jeans tight over the rapidly swelling knee. I got back up, picked the broken right foot peg off the floor and shoved it into a pocket as I hobbled to the bike. I sat astride her again, refused the offer of a cup of tea from the lady who had come out of her house to see what the commotion was, thanked the various strangers who had helped, cursed the idiot trucker who had overfilled his diesel tank and left a line of rainbow on the road stretching a good few hundred meters and I rode home, holding my bad leg up, just like that first day...Only now it REALLY hurt.

Later on, I was lay on a trolley, curtained off from the rest of the accident and emergency section of the hospital having (for the second time in an hour) a huge, metal cannula wriggled around inside my football sized knee while the doc sucked the blood out with a syringe, constantly squirting my life's essence into a dish as even the enormous syringe he was using couldn't keep up. Eventually though, he won the battle and I was free to hobble home. A few days later, I had an MRI (A normal x ray couldn't penetrate the swollen tissue well enough to show the damage) So there I was, a man of a certain age, face very red as the nurse, a little slip of a girl in her twenties tried not to laugh at my admission that yes, I had removed the rings from my Johnson, prior to being shoved into the super magnet of the MRI tube.

Turns out, my femur had split longitudinally from the knee up. There followed about 2 months of hobbling in a cast, physio and recuperation.

God I was glad to swing a leg over her again. We went to a rally. Two up, loaded down with all the rubbish you need to make a weekend in a field moderately comfortable, she never missed a beat, a hundred and fifty miles of motorways (yawn) and fast A roads (Yay) We sliced through the traffic, split lanes and hogged the outside line, faster than all else. The usual chick in the cafe admiring the bike and telling me how much she loved it made me smile. I am an honest guy though and not a cheat. Especially when I have my son with me.

That was a good weekend, great bands, good mates, new friends. An easy, Monday run back South to home and at last, a shower.

She took me to works all summer, through the autumn, into the worst bits of winter. Thirty two miles each way. Some shifts lighting up the pre dawn with her roar as we tore up the road thirty five minutes before I needed to be at work for five AM. The late shift, heading back home at midnight or one AM...Some days doing the whole trip in 25 minutes..(Shh, don't tell).

One morning at a quarter to five, I was stood with her about a mile from the on ramp to the M5 at Tewkesbury. The terminal on the fat live lead from the alternator had finally succumbed to the vibrations and cracked off. What do you do in that situation? Why, you push your bike back down the hard shoulder for a mile, back up the ramp and all but collapse in a heap while your heart tries to beat it's way out of your chest like John Hurt's alien baby.
My wife turned up, took me home and I hammered at a copper pipe fitting in the shed. Drilled two appropriate holes in it, grabbed a screwdriver, cordless drill and a fat, self tapping screw and headed out sitting in the passenger seat of the wife's car to do some roadside repair work. It was a pretty quick job, I just drilled a pilot into the cable, screwed my home made terminal to it and bolted it onto the battery. Then I was off, my wife riding shotgun in case the repair failed as we went hem via the A38. (Breaking down on a motorway can cost you a lot for the recovery et, so we went the low way). I lasted about 2 miles before she teased me into winding the throttle on and by the time my wife got home, angry at my not going a steady fifty, I was half way through a cup of coffee. Such is life.


She looks a bit older, a bit more worn now (My Harley, not my wife). She's been left silent for far too long, after all the late nights we have spent with the spanners out and the fast, hard rides through the English and (occasionally) Welsh countryside. Sun, wind, rain even snow we have been through, the harsh, winter riding on salt covered roads perhaps the worst. She is still gorgeous to look at, still pretty and red, the chrome duller perhaps, but she is mine and I ain't letting her go, no matter how much of a bitch she can sometimes be.
edit on 18pSat, 19 May 2018 05:11:18 -050020182018-05-19T05:11:18-05:00kAmerica/Chicago31000000k by SprocketUK because: spellings

posted on May, 25 2018 @ 11:02 AM
link
Sometimes, the hardest love affairs of all. What is it with men and machines? They drive us crazy, make us spend gobs of cash, fail us when we need them most. But man, when they're running clean and smooth, it's all worth it somehow, isn't it?

As always Sprocket, I loved it. Well done.

Thanks Shep.
I totally get what you mean.
There is something special about a bike (or a car, for that matter) which you have worked on and been through the mill with.
I wouldn't have it any other way.

LOL, some great stories there with the exception of the leg, ouchy. I can relate all to well, reminds me of some of my Shovelhead days. I remember one day riding home, which was about about 30 miles from where I was, in peak rush hour traffic in Los Angeles with a busted clutch cable that didn't work, made for an interesting ride to say the least. Power shifting a Hog is a lot different than doing it on a moto-x, LOL. I have a few good stories with that ol' Shovel and I do miss her.

My current bike is 15 yrs old, it's been really good to me and the riding stories have continued. 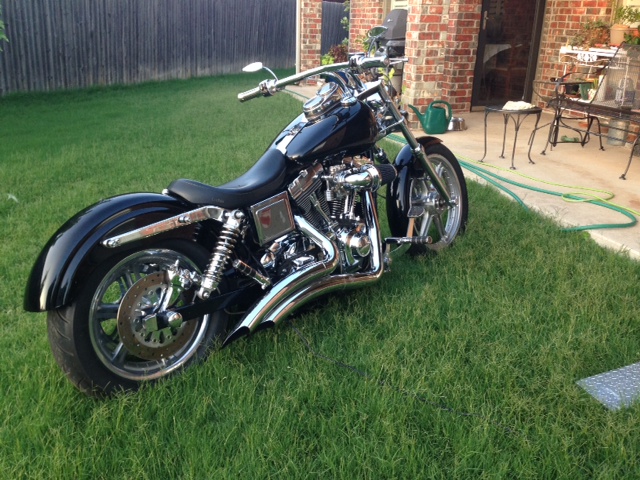 I think it is one of those things all bikers have, that history with a few bikes, some just get to us more than others.
That's a beautiful ride btw.

I was kind of relieved when I read the line explain you were talking about your bike.
I do know how things get when a little age set in.

I did aim for that little bit of confusion.