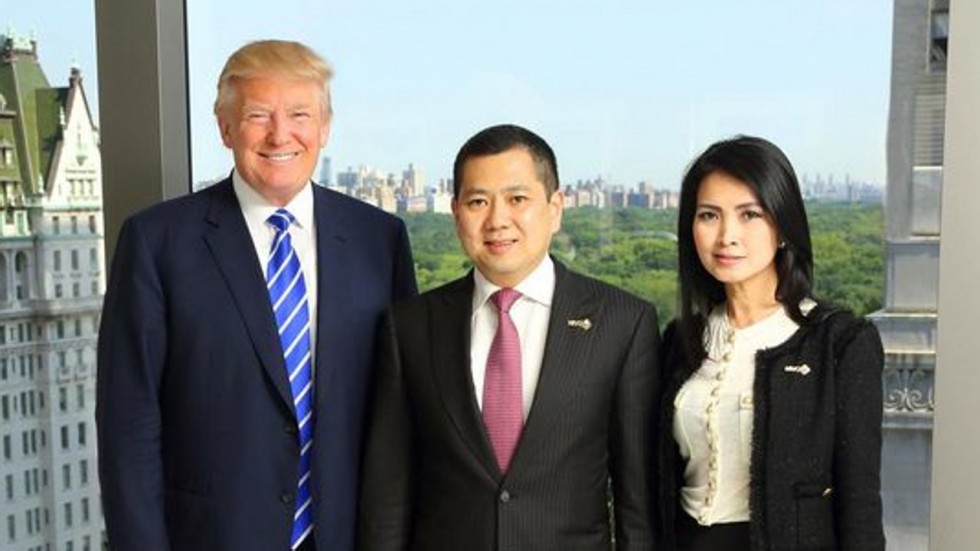 A lot of eyebrows were raised when President Dennison went all Make China Great Again on Twitter. In case you missed it:

It wasn't just his concern for too many jobs lost in China either. Last March, the U.S. Department of Commerce handed ZTE the largest export control violation it's ever given, $1.19 billion for exporting US technology to North Korean and Iran. ZTE was allowed to continue doing business with US companies on certain conditions. They violated the terms and last month, the U.S. Department of Commerce banned US companies from doing business with ZTE for seven years as a result.

As was reported today, last month the Chinese put together a list of demands for Trump (worth checking out). Number 5 on that list is about ZTE and states:

Having noted China’s great concern about the case of ZTE, the U.S. will listen attentively to ZTE’s plea, consider the progress and efforts ZTE has made in compliance management and announce adjustment to the export ban

About a quarter of what goes into ZTE's phones is sourced to the US. Without a massive undertaking, ZTE can't simply switch to alternatives and on May 9th, ZTE announced that they were suspending operations, including manufacturing.

Oh and did I mention that in 2011, the HPSCI (you know, that dysfunctional #show Nunes is running into the ground) recommended that the government not use ZTE phones because of the threat of Chinese state surveillance?

Something happened between the May 9th announcement and the May 13th tweet from Trump.

A subsidiary of Chinese state-owned construction firm Metallurgical Corporation of China (MCC) signed a deal with Indonesia's MNC Land to build a theme park outside Jakarta as part of the ambitious project, the company said in a statement Thursday.

The park -- expected to be backed with up to $500 million in Chinese government loans -- is part of an "integrated lifestyle resort", known as MNC Lido City.

The project includes Trump-branded hotels, residences and a golf course, as well as other hotel, shopping and residential developments.

The Chinese construction company is not expected to be building any of the Trump branded properties within the resort complex or provide the funding to build them (but hell, who knows?) but there's no "Lido City" without the theme park and without the Lid City, there's no properties to pay Trump for his brand.

A bit more from the MNC Lido City website. I ran the text about the Trump branded properties through Google translate. 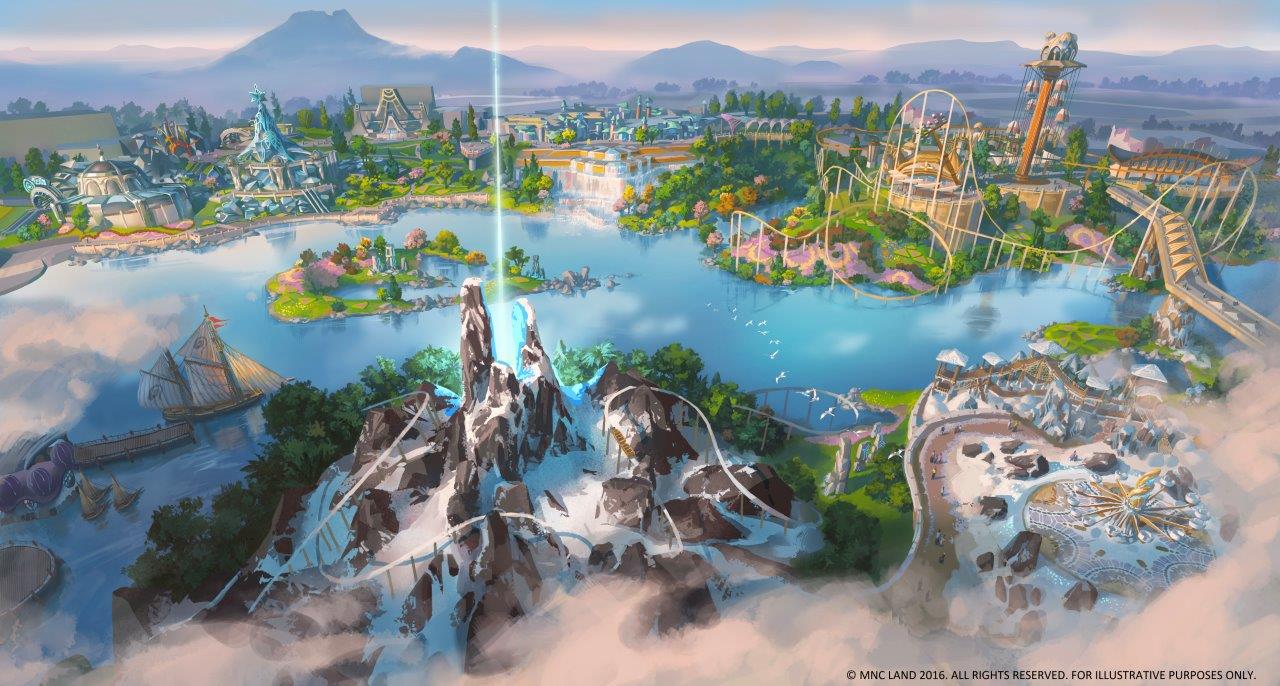 In collaboration with Trump Hotel Collection, the first Trump community launched in Asia will feature Trump's signature brand marking unparalleled luxury, modern glamorous nuances and quality service accompanied by the world's best design designed by the international Oppenheim Architecture and EDSA companies that have earned a number of awards.

This community will provide a 6-star resort for a moment of relaxation moments from the city's atmosphere, offering a Trump brand of personal service standards and a wide range of facilities including upscale restaurants, spa and conference destinations. As a complement to this community also attended the 18-hole championship gold course designed by Ernie Els, who won the four-time Major winner and 2015 Gold Designer of the Year along with an elite country lifestyle club that gave its members unrivaled privileges such as 24/7 concierge service and other advantages. For those who crave a second home, this nich community also brings exclusive collescence from super-luxury villas and mansions as well as high-end resort condominiums that provide a stunning golf backdrop to its inhabitants while keeping privacy in the presence of a vast expanse of landscapes.

There is a truly unprecedented level of entanglement between a President's business interests and US foreign policy. I remember a thread where Trump supporters screeched long and loudly about John Podesta having shares in a company in the Skolkovo tech park (Joule), a project that was promoted by the State Department as part of the "Russian Reset."

This is in the same vein but even worse. And if you cried foul about Podesta, you should certainly see the potential problem here. While it's not proof positive of a quid pro quo whereby Trump set policy to benefit himself, it's also hard to imagine that Trump can forget about a deal that will net him millions when making policy decisions.
edit on 2018-5-15 by theantediluvian because: (no reason given)

But so far, at least with the payments to Cohen we know of, it seems that trump has actually went against those giving his lawyer money

If he did it to benefit himself and it is proven, he should be held accountable

I think there may be another option you haven’t mentioned

I think this may be a quid pro quo, but not for trump personally, but to solve the trade disputes with China

But you are right to look in to this. We need people being watchdogs to make sure no elected official is making policy to just benefit themselves
edit on 15-5-2018 by Grambler because: (no reason given)

ZTE purchases $3 Billion in US manufactured components annually. The "quid pro quo" here was that ZTE staying in business is good business for the US tech sector. Meanwhile, the ultimate goal here was already achieved... ZTE will almost certainly not be able to find a market to sell phones to within the US. So there's absolutely no downside to America here and nothing but $3 Bil in upside.

But i won't own a ZTE phone. They are known spyware purveyors.

The deal is with the Trump organization, not Donald Trump.

Who could be against THAT ?

Right and it's for that reason that maintaining a global business empire and being President don't mix well.

I'm sure you've heard more than once that Carter put his peanut farm in a blind trust. But did you know that the Republicans then kept tabs on it after the fact? And because Billy was basically embezzling from the company, the Republicans had a special counsel appointed to investigate whether or not Jimmy Carter was secretly putting money from his own peanut farm into a political slush fund?

How would we ever know? Short of a recorded conversation or one side revealing the details, how could anyone find out that there was a backroom deal?

And what if there was no deal but at least in some part, Trump's actions were guided by his personal interests nonetheless? That's something that cannot be proven one way or the other by any means short of Trump's own admission.

At the least it's a conflict of interest whether or not it actually impacted Trump's decision. And it's not exactly the first either nor will it likely be the last. I wonder if this is going to be the new norm going forward with future presidents?
edit on 2018-5-15 by theantediluvian because: (no reason given)

This is exactly the biggest problem with Trump.
He may claim to have divested himself of his business interests
(supposedly being overseen by his progeniture)

However, there is absolutely no doubt in my mind
that for every foreign policy 'decision' that Trump makes
he will have a very keen eye as to the knock on effect to his business

There are vast examples, on every continent :

BBC : A list of Donald Trump's conflict of interest

Yeah but people are still going to buy phones and stuff, ZTE failing wouldn't make much of a difference because the established companies will fill their place or new companies will, companies that'll need to source components too.

Nobody ever gave me a job so I could buy stuff off them, that's basically what you're saying.

posted on May, 15 2018 @ 02:05 PM
link
Has Trump divested from his businesses yet? I hear a lot of people saying he has, but everything I’ve read points to the contrary.

I know he supposedly turned over the day to day of his businesses to his sons, the same sons who have been personally working on this deal with China..

originally posted by: bigfatfurrytexan
I suspect its business related.

But i won't own a ZTE phone. They are known spyware purveyors.

Trump knows that. Perhaps all his staff will get them so he can keep them under surveillance and stop the leaks.

Or do you wish bad things for China ?

Do you remember this 'mise en scene' from Janurary 2017 ?
Trump announced that he was handing over the business to his sons ... 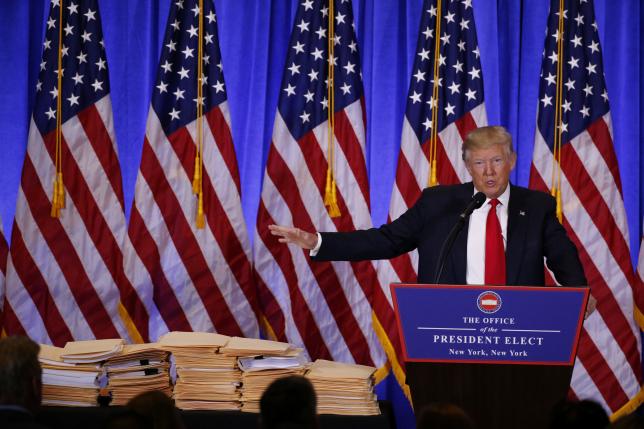 
The question is, did he make the judgement for the purpose of benefiting his company, or is that just a side effect?

That does not matter. That cannot be proven, and I'm guessing he won't be tweeting an admission. Short of that, no one will ever know the motivation behind his decision, except him.

What we need to focus on is the evidence. If it is shown he and his company have personally benefited from it, then it's a conflict of interest.

This is why he never should have been allowed to take office until we knew who he was and what his interests really were. When someone has so many business interests and potential agendas, we need to be able to follow the money.

posted on May, 15 2018 @ 04:02 PM
link
you really have to work hard to prove how bad Trump is since the Russia bs has been blowing up in your face for well over a year now and all that's been turned up in that case is evidence to prove that Russia and British intel were colluding with the Clinton campaign to set Trump up on a Russia collusion narrative that's still has zero evidence

posted on May, 15 2018 @ 04:16 PM
link
a reply to: toysforadults
Anyone that cares about convincing Trump supporters of anything at this point needs a reality check. You guys bend and twist the facts to your liking at every chance.

That doesn’t mean the rest of us have to bury our heads in the sand though.

I think they are just using Trumps business tactic, "aim high" and hope something sticks.

What we need to focus on is the evidence. If it is shown he and his company have personally benefited from it, then it's a conflict of interest.

This is why he never should have been allowed to take office until we knew who he was and what his interests really were. When someone has so many business interests and potential agendas, we need to be able to follow the money.

Which actually makes me wonder if all of the bluster, the deceit and daily lies
is nothing other than a distraction, to bamboozle people, to minimize them thinking things through
Stormy, Iran, NK, indictments, FBI searches, contemporaneous books, senate testimonies...

These are just the last 8 installments from Trumpletown....
that ones that spiring to recent memory

The list of "Trump" headlines, however,
is truly mind boggling

Think about it :
The Potus, using his postition, for personal gain
is a massive no-no

This would truly be worth a special counsel being called in

People had better not start thinking about Trump like that


Carter put his peanut farm in a blind trust.
But did you know that the Republicans then kept tabs on it after the fact?
And because Billy was basically embezzling from the company, the Republicans had a special counsel appointed to investigate whether or not Jimmy Carter was secretly putting money from his own peanut farm into a political slush fund?