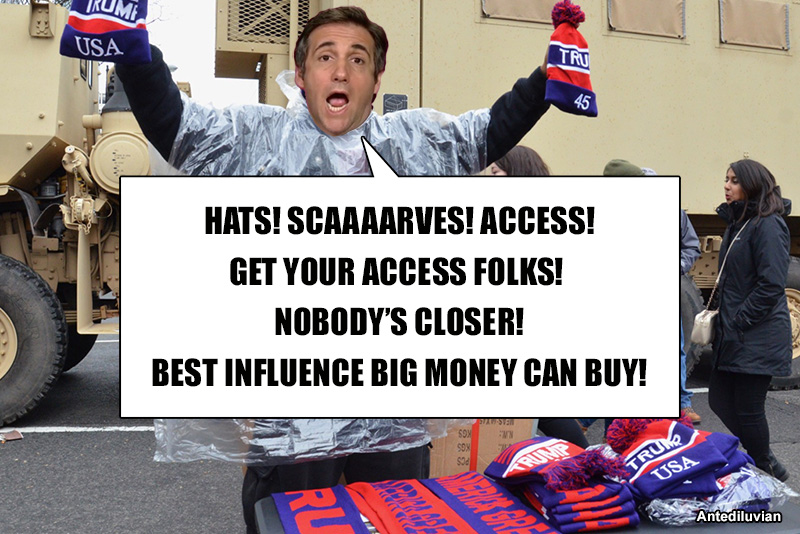 Internal AT&T documents leaked to The Washington Post reveal that among the services Crony Cohen was being paid $50,000 a month for, was "work" involving the company's proposed $85 billion takeover of Time Warner.

[exnew]Three days after President Trump was sworn into office, the telecom giant AT&T turned to his personal attorney, Michael Cohen, for help on a wide portfolio of issues pending before the federal government — including the company’s proposed merger with Time Warner, according to documents obtained by The Washington Post.

The internal documents reveal for the first time that Cohen’s $600,000 deal with AT&T specified that he would provide advice on the $85 billion merger, which required the approval of federal antitrust regulators.

Just three days after the inauguration?!

Let's not kid ourselves here friends, there was no expert advice on the intricacies of FCC regulation or corporate antitrust law that Michael Cohen was qualified to provide. AT&T has countless lawyers far better suited to that. AT&T was paying Crony Cohen for access to the President.

A “scope of work” describing Cohen’s contract in an internal AT&T document shows that he was hired to “focus on specific long-term planning initiatives as well as the immediate issue of corporate tax reform and the acquisition of Time Warner.”

AT&T declined to comment on the documents, which were provided to The Post anonymously, but did not challenge their authenticity.

What we're getting here is a peek behind the curtain at the swamp being the swamp at the highest levels. So far the confirmed payments are nearly $3 million — is the end of it or is there more? Just how much money did Crony Cohen line his pockets with? Who does he think he is? The long lost Podesta brother?

In an internal email to employees obtained by The Post, AT&T said Cohen was among “several consultants” the company hired in early 2017 “to help us understand how the President and his administration might approach a wide range of policy issues important to the company, including regulatory reform at the FCC, corporate tax reform and antitrust enforcement.”

How many other swamp creatures in the Trump Swamp have cashed in a similarly biggly fashion for nothing but their proximity to the President?

The documents also claim that Cohen was to spend none of his time lobbying — the act of seeking to influence decisions made by politicians. According to the article, under federal law, a person must register as a lobbyist if 20 percent of the work they do for a client consists of lobbying and they have contact with two or more government officials in relation to the client.

It's difficult to say if Cohen broke the law here but I think we can all agree that even he didn't, members of the President's entourage being heavily compensated by big corporations seeking to influence the government, particularly those with major deals pending Executive Branch approval, is obscene, dirty, slimy, foul-smelling swampery that shouldn't be tolerated.

Rudolph W. Giuliani, a lawyer for Trump, said Wednesday that the president was unaware of Cohen’s consulting agreements.

Then again, Giuliani is a liar (and peas in a pod with Cohen) and so is Trump so who really knows?
edit on 2018-5-10 by theantediluvian because: (no reason given)

Your code is messed.

I'm not seeing anything funky? It did take a long time to actually post though.

posted on May, 10 2018 @ 07:25 PM
link
This is inexcusable. The megaconglomerationization of "media" is everything's thats wrong with the country.

I think you are absolutely right that Cohen seems like a shuckster cashing in, and this should be pointed out and condemned

The question is did his influence work

I could be wrong, but trump actually went against the merger, did he not?

Was Trump against it?

Did it go thru?

Hillary was accused of pay for play as well.

So far it seems most of these cases Cohen got money, there is no record of trump meeting with the groups giving Cohen money, and he acted against the money givers

In Hillary’s cases, we see groups around her accepting money, and then her meeting with the people that have money is person, often times favoring those donors with decisions

Like Veklesberg the Russian oligarch she pushed a deal favoring that gave the foundation money.

That same oligarch paid Cohen (for some reason the media feels this is a big deal but not his Clinton connections) and trump then sanctioned him.

Sure, but it could also be as simple as a crony lawyer who is not above exploiting his publicly known access to the new president.

What would be Trumps benefit here? A split on the 600k?

I think there needs to be some benefit found that shoes Trump benefited before he could be put up with Hillary. Heck this might even take him all the way up to Chenney level.

Oh and btw, I am glad you are taking an interest in this.

You, who called anyone who even wanted the uranium one deal investigated, (where Russian interests gave Hillary’s foundation money, and bill met with putin and got half a million from a Russian state bank) a right wing nut.

But now that it’s someone connected to trump, you suddenly take an interest!


Thanks, and you have nice boobs.


Whether Trump was knowledgeable or profited from this remains to be seen.

originally posted by: Middleoftheroad
a reply to: Grambler

Trump administration sues to block AT&T-Time Warner merger
The suit comes little more than a year after then-candidate Donald Trump said the $85 billion merger would place ‘too much concentration of power in the hands of too few.’


So this more like an opportunistic lawyer, (redundant) and not anything against Trump.

But I imagine that won't stop the rabid anti-Trumpers from ignoring reality and writing their own fan-fiction.