page: 1
42
<<   2  3 >>
log in
join
share:
matafuchs
+27 more
posted on May, 7 2018 @ 03:01 PM
link
So, since he was selected, Mr Pence our current VP has been attacked by the left and the LGBT(add some more letters) community. This even after Trump was introduced at the RNC convention by a gay man, Peter Thiel a well known tech entrepreneur as well as being the ONLY elected president to support gay marriage DURING his campaign.

However, the left and the MSM have created this fear of him that is not warranted. Go ahead and tell me he want to change all gays. No worries. It was a long time ago and take out of context which is something the media is good at. Remember there was a 'gay dance' outside his home on Inauguration Day.

Here we have US Ambassador to Germany, Richard Grenell,who is openly gay. During the swearing in ceremony his partner, Matt Lashey, was present. 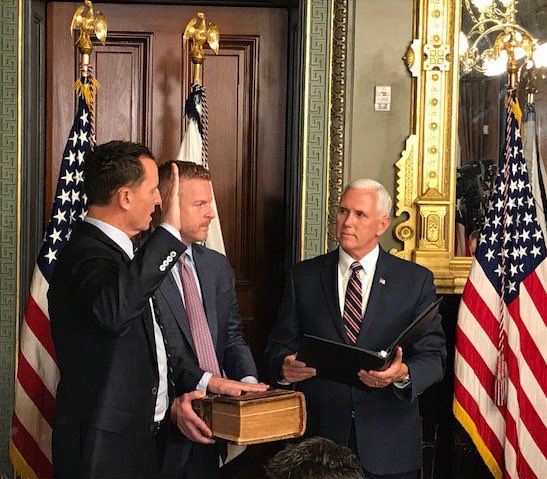 Now, what is amazing, is that it has taken this long because Senate Democrats have been trying to BLOCK his appointment. Yup, the party of tolerance once again shown to be hypocritical. 8 months...

The GUT
+14 more
posted on May, 7 2018 @ 03:15 PM
link
Trump also hired the first woman to oversee construction of a skyscraper. At least she was the first in New York if not the U.S. or maybe even internationally.

That was pretty big in those days and the project was obviously important to him being that it was Trump Tower.


They were upset because it makes it harder to create their false narrative that Republicans hate gays, women, etc. They don't want people to realize that it is propaganda.

Sure was. It was very big at the time.

I don't see the part about Democrats being outraged about sending a gay man to Germany.

originally posted by: OtherSideOfTheCoin
So who is outraged....

I am. Not one transgender-fluid handicapable vegan person of color to be seen anywhere.

posted on May, 7 2018 @ 03:51 PM
link
The rightists are doing exactly what the leftist do of exploiting people to make them seem less bigoted, Pence has been open to pro-conversion therapy

originally posted by: MiddleInsite
a reply to: Phage

Ever hear gay men talk about women??? Not saying they all talk that way, but they sure ass hell can lay the smack down on being a female.......

I highly doubt this guy was picked by the Trump administration, because they thought he was the best candidate to represent the US.

More like the Trump administration is getting incredibly desperate, when it comes to filling US ambassador positions and at this stage will basically take whoever they can get...

Vacant US ambassador positions have been an ongoing issue for Trump ever since he was elected president.

Since he fired all the US ambassadors who were political appointees of Barack Obama, US president Donald Trump has had only two replacements confirmed by the Senate: Nikki Haley, to the United Nations, and David Friedman, to Israel. That means the US has no top representative to 57 countries and territories with a total population of 3.9 billion.

Not really sure where in the article it said that any on the left were outraged. Can you point that out? The article does mention a queer dance party, but usually dance parties aren't thrown out of outrage. (They can be quite outrageous though.)

The content doesn't cover any outrage over the appointment.


Indirectly at the heart of the matter. That seems somewhat self-contradictory. An oxymoron, as it were.
edit on 5/7/2018 by Phage because: (no reason given)

No but the Left is supposed to be grateful that Pence didn't send him to conversion camp. Pence's record speaks for itself. I'm surprised the "conservative" Putin Appreciation League (PAL) isn't upset that an apparent Russia hawk got the ambassadorship.

In other news, the country once elected Obama as President and despite the fact that he wasn't aborted as an embryo, the Right was "outraged!!!"


And the fact both Trump university and The trump Foundation were total scams..

There is a laundry list of blue collar construction types he has refused to pay..


His presidential campaign is presently under investigation by the FBI into if he made a deal with the Russians..