I would be careful using these terms on the open internet. Germany is very quick to tag you secretly as a physco. They can commit you much faster here than in U.S. and getting out can be very hard.

Germany is out to get you. They paid your closest friends and family to make you look bad. There was a stalker in London who hacked into your computer. You tried to go after said stalker but some secret people of some sort got in your way. At one point you were playing in a German cafe which was being guarded by some bad people to prevent people from coming in and then they showered you with wonderful gifts and delicious treats.

You were then locked away in an insane asylum of some sorts against your will. You called the German police and they freed you. But they must be separate from the rest of Germany because Germany is out to get you. For something you didn’t do. You’ve been set up! For something....not sure yet.

They are preventing you from getting a job. They are hacking into your emails. They are blocking you from contacting the London hacker. They paid off your family. They locked you up. They, they, they, they. There’s a lot of theys here. And they are investing an awful lot of money and resources to ruin your very specific life.

So...who are they, and what do they want with you?

Also, you screwed up. You called Putin for help! Shloulda called Trump! He’s the greatest international conspiracy negotiator of all time ever! Not Putin...silly peeple.

I’ve got to ask, are you prescribed any medication? SSID’s? Benzodiazepines? Anything like that?
edit on 7-5-2018 by Assassin82 because: (no reason given)

Ha me too. I am firmly against hierarchies an anarchist basically. But why would they be scared from two little people like us?
How do they know we exist?

I tried from multiple devices.. refreshing was no help. 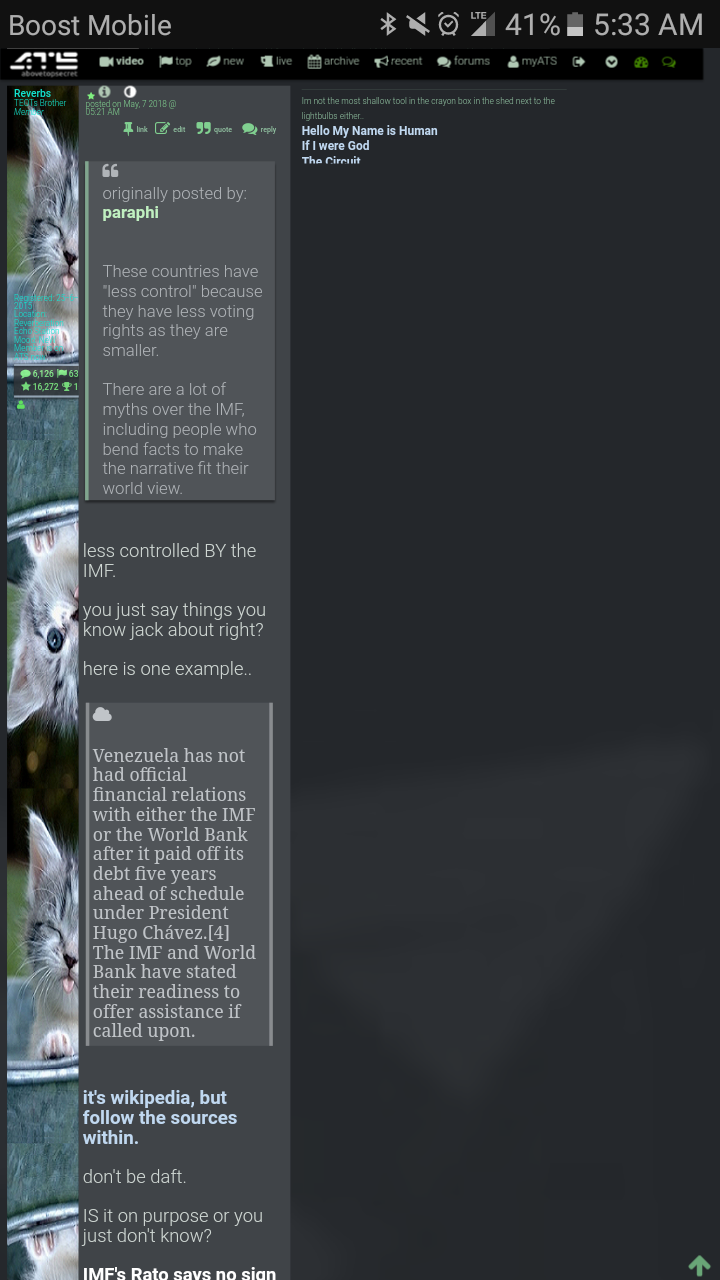 And yea I havn't been using my VPN lately.

My internet starts getting really weird, my PMs all come pre read, so I don't know I have them.. emails the same..

Here's from yet another device. Last time I got a bit mouthy.. 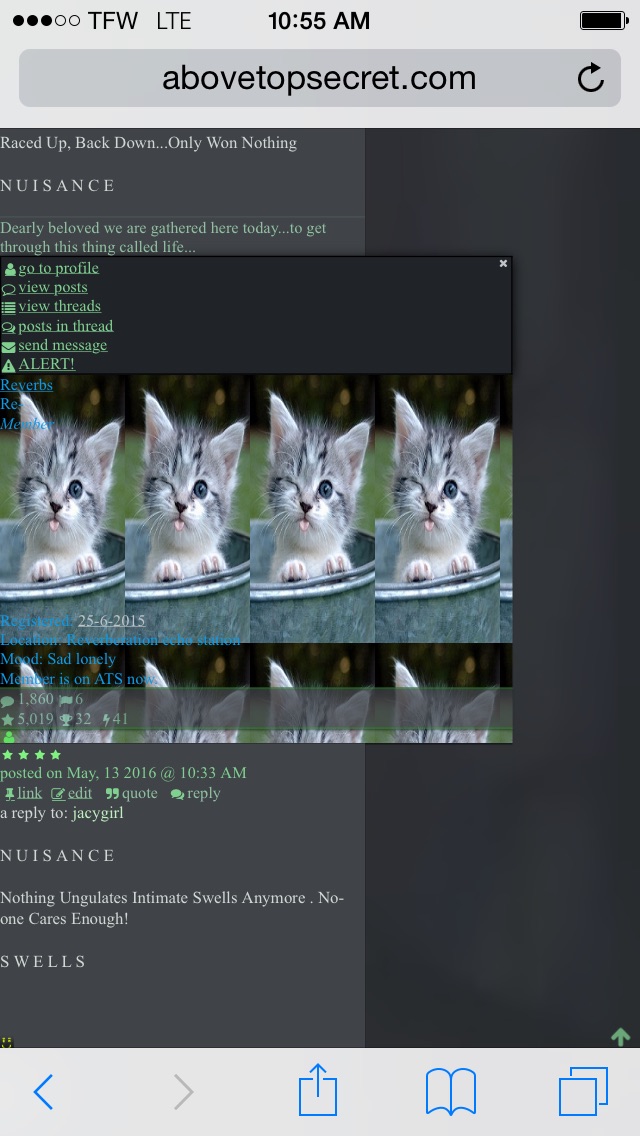 I lose a lot of phones.

Crickey, did I touch a raw nerve? Try to keep it civil.

You gave a list of nations who you said had nothing to do with the IMF, yet all do. All are members. You don't need to receive a loan from the IMF to be a member, and to have a vote. Iran's share of the global vote is 0.689 and Venezuela's is 1.223. Just as examples.

But like I say, don't let the facts get in the way, eh?

Members of the IMF

EDIT to add that North Korea is the only exception from your little list of dysfunctional states. North Korea alongside Andorra, Cuba, Liechtenstein and Monaco are not members either, as far as I can tell.
edit on 7/5/2018 by paraphi because: (no reason given)

I didn't talk about votes did I?

You are thinking backwards..

Now think about what I meant.

How do you think places like Germany or Brussels can leverage against say Greece?

Think of a girl with college debt to the US government through a middle man or whatever.. They will work most of their life in a way maybe they don't want to just to serve that interest. All puns intended.

Thanks for the concerns. Like I said if they try they'll have to shoot me.

You have been tagged...... with a mental health alert. I have seen this many times before.

Germany found out I am diabetic and under German law .... which is very vague....they confiscated my driver's license and said I can have it back once my medical condition improves.....which will probably never happen.

I have hated Germany for 40 years (EVERYDAY) and feel like a prisoner here BUT my kids and grandkids live in Germany and my love for them is stronger than the hate I have for Germany.

originally posted by: Reverbs
a reply to: DeathSlayer

Two post I made here at ATS and have been visited by both U.S. and German authorities....

ATS is either a covert agent or there is one lurking here .....at ATS.

originally posted by: Reverbs
I didn't talk about votes did I?


originally posted by: Reverbs
I didn't talk about votes did I?


people who go to loan sharks make a choice too.. Choices are choices..
In this case avoiding loans seems like it has bad consequences.. Especially if you produce oil..

Let's remember what I said ok?

quit being daft I will say again mate.
Are you being willfully ignorant (not stupid mind you, but ignorant) or what?


We ARE off topic at this point. You can respond one more time if ya like.

Venezuelan President Hugo Chavez is to withdraw Venezuela from the World Bank and the International Monetary Fund (IMF) after paying off its debts five years ahead of schedule.

"We will no longer have to go to Washington nor to the IMF nor to the World Bank, not to anyone," said the leftist leader, who has long railed against the Washington-based lending institutions.

Venezuela, one of the world's top oil exporters, recently repaid its debts to the World Bank five years ahead of schedule, saving $8 million. It paid off all its debts to the IMF shortly after Mr Chavez first took office in 1999. The IMF closed its offices in Venezuela late last year.

originally posted by: Peeple
a reply to: Lagomorphe

I am sorry, what do you mean?

Fair enough... too hard for you to look any further!


Do you have some sort of government tech that they want? Did you used to be a government contractor perhaps? Are you in bed with the Russians? An American spy? What makes you such a threat to these people that they would dedicate all this time, money and effort to keeping you jobless and in a constant state of fear and/or paranoia?

I'm not calling you a liar, I'm just yet to see a reason why an entire country is out to get you and why all your closest friends and family would be willing to take a pay out to turn their backs on you.

I don't always understand why you write what you write, but at least you are always polite.

Huh? You don't make any sense.

Lagamorphe the Frenchmen is saying you are rerouting your IP address through langley Virginia making it look like you are an American. And because of his IP tracers he sees that.. Or maybe you eat a lot of Hot dogs? I don't know.

Well I'm online via SIM-card, if someone is rerouting me it's 1&1, which wouldn't surprise me yesterday they shot me down completely but I got more than one card...