I don't know what to do, but I won't go down without a fight.
Maybe Putin? Is there a IMF in Russia?

countries with less IMF control are known to you.. Syria, Iran, North Korea, Venezuela... I think you can see a picture painted.

Russia and China and others are forming their own block trying to get out of the western banking system's clutches.

basically IMF lends to central banks in countries, often loans that can not be payed back, and it's basically like pinp my country out game..

Money is debt, it's always printed at a loss, but a loss to who? Who has the power to have more money owed to them than there is money?

that's the craziest scam I've ever heard of.

The China-backed Asian Infrastructure Investment Bank seeks to address a critical infrastructure gap in the region, but it is also a challenge to the existing global economic order, says CFR’s Robert Kahn.

From this perspective, the AIIB—along with its companion BRICS bank [comprising Brazil, Russia, India, China, and South Africa]—is a challenge to the existing global economic order and a clear statement of intent from China that it desires to play a leading role in defining new rules of the game for investment in Asia.

In the fall of 2014, the U.S. government caught many by surprise when it made an aggressive and public effort to persuade countries not to join the Beijing-led institution. The United States clearly had concerns about the economic and political implications of a new multilateral lending agency led by China, and in any event, it was highly unlikely that the U.S. Congress would approve a financial contribution allowing the United States to participate. The Obama administration’s efforts led a number of countries to hold back from signing on the the AIIB

I wrote Putin an email with a link to this thread.
Am I crazy? Probably...

Trying to get me in more Trouble?

So, if you have plenty of proof (for whatever), go to police. Or take a lawyer.

I have been to the police. Die Staatsanwaltschaft Freising sah keinen Handlungsbedarf.

I don't know what I'm doing. But this can't be allowed to continue. Stay save.

Is that a common German or Russian misspelling of safe?
I swear the phrase stay save is scarier to me than it should be haha.

and you too. Stay save.

who are they? the reptilians? the jews? the muslims? the russians? the mossad? the bnd? the people of germany? the german soccer nationalteam? scientology? do you know what this posting is all about, because i dont get it. and iam pretty curious.

This is my thinking


originally posted by: Peeple
a reply to: Reverbs

My only clue is a phone call I got: "This is the bank"
So my thinking is Rothschild. But that's pure speculation.

My sympathy to both of you. I used to label these kind of things all with the same "Mental health issues and general paranoia" label, but it seems folks around the world have so many similar stories that they can't all be a) faked b) mental health. Much like the UFOs, so many witnesses around the world, everyone can't be looking for fame and attention or just making a prank.

I thought once upon a time, that i was gang stalked, but that was a mental health issue. But maybe ALL of these type stories are not.

sorry, but i dont get it. maybe you have go to a doctor, and i mean this serously. i once had a sort of mental breakdown (depression) after a bad injury, and i had to take 'gute-laune-pills' - it did help.

I swear my mental health was fine proceeding and after these events.
I'm still under Non Disclosure Agreements from Department of Homeland Security work for example..

I know it sounds crazy though. I sometimes try to imagine it was me being crazy. In my case there are many witnesses, so I can't let that be the answer even if I wanted it. What happened did make my mental ground very shaky of course, but that was the cause, not the symptom.

my uncle didn't like the people going though our trash and the cars watching the house. He worked for the Navy for years and years as a chief research engineer, I was in the Army for a brief stint.. I pretended not to know what he was talking about. It seemed like it was all for mental impact more so than actually watching stuff. They wanted me to see them. My little brother one hour drive away was complaining to my mom about his house being watched, and I didn't know about this till way after the fact since I kept it all secret, but he complained at the same time as me in another town.. I foudn this out maybe 6 months later?

I know I used bravery to take back my space. So I will keep saying my stories. Maybe someone somewhere out there will recognize something of my story in their life, and they will know better how to be.
edit on 7-5-2018 by Reverbs because: (no reason given)

originally posted by: Reverbs
countries with less IMF control are known to you.. Syria, Iran, North Korea, Venezuela... I think you can see a picture painted.


originally posted by: Reverbs
countries with less IMF control are known to you.. Syria, Iran, North Korea, Venezuela... I think you can see a picture painted.

less controlled BY the IMF.

you just say things you know jack about right?

here is one example..

Venezuela has not had official financial relations with either the IMF or the World Bank after it paid off its debt five years ahead of schedule under President Hugo Chávez.[4] The IMF and World Bank have stated their readiness to offer assistance if called upon.

IS it on purpose or you just don't know?


WASHINGTON (Reuters) - North Korea has not sought membership in the International Monetary Fund and, if it does, it will be up to the global community to decide whether it should be able to join, IMF Managing Director Rodrigo de Rato said on Sunday.

so go to public. but, i have to ask again, what exactly is happening to you and why should anyone try to destroy you? i know, these things happening. but sometime you know, our mind is very complex...

when I talk like this my ATS goes screwy every time..

Only at these times.. 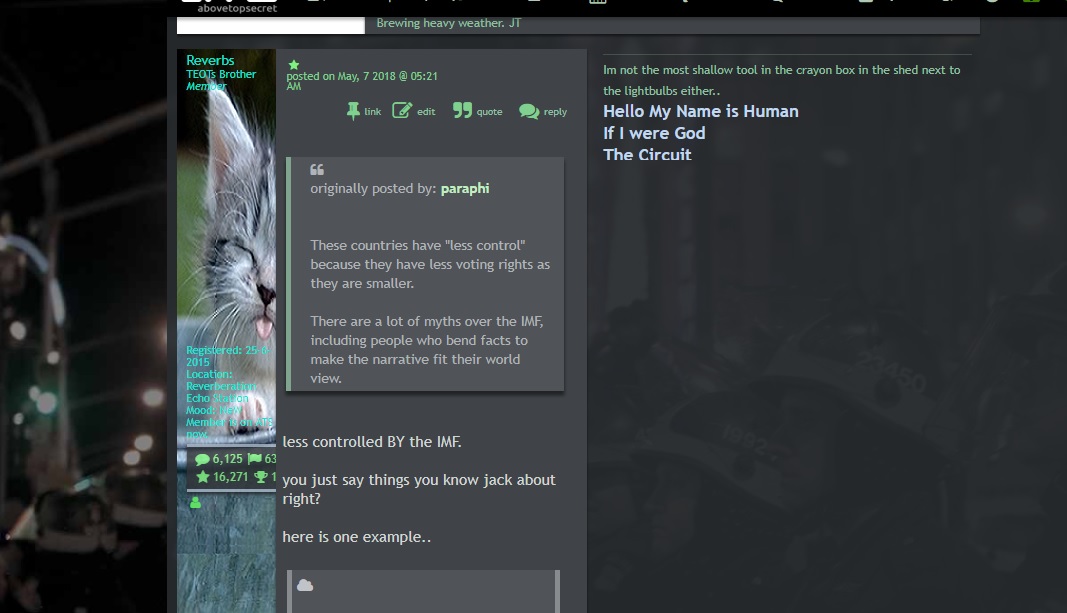 I reloaded my browser and came back to the page on from the my ats..

it looks normal to you guys though right?
edit on 7-5-2018 by Reverbs because: (no reason given)

What public? Maybe a bunch of hackers could help. But let's see and hope there will be a response from the Kremlin, as far as I can tell that's the only hope left.

Would be kind of awesome if they'd come to this thread and we'd go public from here, right?

Wow, it didn't look normal to me at all, but when I refreshed the page it was fine.