According to reporting in The Guardian, following Trump's visit to Israel last year, Trump aides hired Israeli private investigators to dig up dirt on Obama administration officials who played key roles in negotiating the Iran deal, as part of a campaign to discredit these people and through them, the deal itself.

Aides to Donald Trump, the US president, hired an Israeli private intelligence agency to orchestrate a “dirty ops” campaign against key individuals from the Obama administration who helped negotiate the Iran nuclear deal, the Observer can reveal.

People in the Trump camp contacted private investigators in May last year to “get dirt” on Ben Rhodes, who had been one of Barack Obama’s top national security advisers, and Colin Kahl, deputy assistant to Obama, as part of an elaborate attempt to discredit the deal.


Sources said that officials linked to Trump’s team contacted investigators days after Trump visited Tel Aviv a year ago, his first foreign tour as US president. Trump promised Netanyahu that Iran would never have nuclear weapons and suggested that the Iranians thought they could “do what they want” since negotiating the nuclear deal in 2015. A source with details of the “dirty tricks campaign” said: “The idea was that people acting for Trump would discredit those who were pivotal in selling the deal, making it easier to pull out of it.”

The investigators contacted various (particularly left-leaning) media outlets that had contacts with the Obama officials to see if they had violated protocol and also dug into their professional and personal lives, looking for anything that could be used to discredit them.

It appears to me that they didn't turn up anything useful as I don't recall having seen anything put out by the admin that would indicate that they had but wow nonetheless.

If the Iran deal is so bad, then the Trump Admin should be able to justify pulling out of it to the American people without resorting to the sort of "dirty tricks" operations unfortunately common in political campaigning.

And why hire an Israeli firm?
edit on 2018-5-5 by theantediluvian because: (no reason given)

Yeah but how is that impeachment thing going?

Good, Kerry pimped his daughter off to wed an Iranian official, all in the family so his loyalties were clear.

Vector99
+16 more
posted on May, 5 2018 @ 04:34 PM
link
a reply to: theantediluvian
So basically Trump asked for an investigation, hired people that find things, and this is bad?

I thought investigations were welcome and shouldn't be questioned?

After the Mueller-judge smack down & the Baker/Page resigning you must be triggered today...

Did your parents let you run the AC extra cold in the basement?

Dirty deeds , isn't that what the meeting with the Russian was about too , digging dirt.
Grubby is as ....

And why hire an Israeli firm?
Why indeed , connections perhaps.

Obama and his "negotiators" certainly don't need any help being discredited.

Are you aware that politics in the U.S.A. is mostly theater? Manufactured drama to captivate the masses and create illusory and nonsensical division while they continue to consolidate and centralize power over every facet of our existence? 🤔 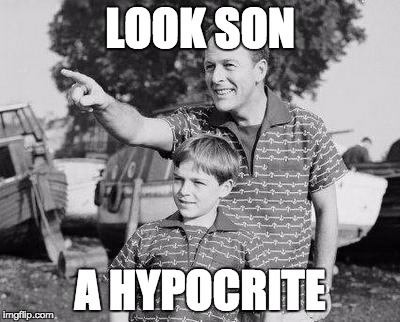 I know trump should have hired Russians to create a fake dossier ..worked for Clinton.

How dare you! I've never pinned anything on a hooker! There's was never any place to pin the pin to!

It's funny isn't it? We heard the constant cries of how Hillary was warhungry and how Obama pushed the survellience of americans to new heights, hence Trump, the outside, needed to be elected. Fast forward a year ahead, drone strikes more than doubled, the bombings continue, our involvement increased in Syria and now Trump and his admin are pushing for a break of the Iran deal and peace. They want war, and the fact he brought on neocon Bolton should be evident of this. He's pumping the military industrial complex with $billions.

Nothing surprises me in the least... this administration is getting more cozy with the Israeli's than any other admin before.

The OP and no leftist have any credibility to launch any criticism over this, though. None at all after their silence on the Obama administrations spying on Trump and his campaign.

However, note that this might blow up in the faces of those who want to make a big deal about it. We've heard that at least one member of the Obama administration has been negotiating with Iran after they left office... if this was a covert investigation to find out who was doing it then it's now certain to all come out.

My perspective is that no administration should be allowed to spy on citizens without proper cause. I do find it interesting, though, that people like Flynn get condemned by leftists who don't seem to care his calls were recorded, yet reading above I don't see a peep from them or any of their usual speculation about what Obama officials were/are doing working with a foreign enemy behind the govt's back.

The OP is a classic example. When it is to the detriment of Trump the threads are about the evils of the people who were spied on. Then a complete reversal about the evils of spying when the shoe is on the other foot. Pure hypocrisy.
edit on 5/5/2018 by UKTruth because: (no reason given)

Has anything they have said been true?