Even i could read it and i don't/can't read much anyway, i feel like people just want to kick down other people without any regard for what they have to say and that's sad

I think there is a big chance whoever made those took some liberties to make it more fun, maybe it wasn't supposed to be a perfect description of what really happened?

I like the image with the swords, i don't know if it means they had swords that could shoot electricity or maybe the artist is just depicting the clash of swords and the sparks that came out of it? taking artistic liberties or getting his imagination go, who knows
edit on 6-5-2018 by WarriorMH because: (no reason given)

posted on May, 6 2018 @ 08:32 PM
link
a reply to: KarmaComa
Also the "dragon" parade pic seems to have a lot of fantasy floats. According to the notes (if im reading this right) there were a ton of depictions:


Compare with this 'super realistic' ship - I think the odds are zero it was a real boat and ocean and hippocampus in the parade grounds and more likely a cool art piece: 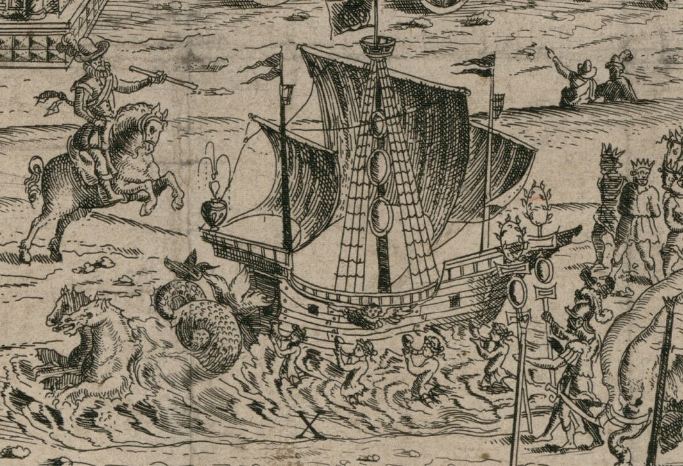 Seems like the woodcutter just liked to draw things realistically.

originally posted by: KansasGirl
How lazy does one have to be to not add paragraphs??? All you have to do is hit the enter bar twice. 😳

I'm afraid to say, the thread and the premise are pretty bad.
Take your favourite image, for example, and the one that follows it:
Public magnificence of the carousel made in the royal place of Paris, Thursday, April 5, 1612 and following days

Drawing of the pumps and magnificences of the carousel made in the royal place in Paris on the 5th, 6th, 7th of April 1612

I think each is from a different artist (if that matters?)

I don't read French, I used google translate on the titles of the images, that's almost as far as I'll go here. Do you understand French?
this is a modern definition:
car•ou•sel (ˌkær əˈsɛl, ˈkær əˌsɛl)

n.
1. merry-go-round (def. 1).
2. a continuously revolving conveyor on which items are placed: a baggage carousel at an airport.
3. a revolving case that displays merchandise for sale.

...but I would assume they are talking about some kind of parade (carousel/merry-go-round) around the square of this 'royal place'.

Let's assume that these parades were well produced: costumes, masks, etc. and lighting and fireworks... Imagine yourself there - basking in the fan-fare, bemused by the spectacle - these costumed characters would have excited your imagination with all the activity. But, someone looking at a drawing of the 'honest truth of costumed characters' might not be as excited or imaginative or 'drawn in' to the image as those who were physically at the parade. I suggest that the artists drew the characters as to what their costumes represented, not what was actually seen.


Every other picture looks like fireworks, and just normal stuff, really.

Representation of two fireworks and triumphs made in Paris on the river in front of the Louvre, Sunday 25 and Thursday 29, days of August 1613 in honor of the Feast of Saint Louis
Zoom in, just left of the middle firework display, atop the letter 'G'. The translation for the text labeled 'G' is, "A Neptune swimming on the ocean". Not 'The' Neptune, 'A' Neptune (never mind that it's not an ocean, either). Just a dude dressed as a Neptune riding/sailing a costumed boat/floaty-thingy on a river at a pretty awesome event!
edit on 2018/5/7 by Jimjolnir because: (no reason given)

I clicked a link, I saw fireworks. I left.

Read this
Spat coffee out
Died

5th pic: great place of Hotel Royal des Gobelins, where skilled men have established manufacturing for the crown furniture, are erecting [something] (looks like a column) in the honour of Mr Brun, first crown painter.

oops the censors where lazy on this one, "something", looks like an atmospheric eletricity capture device just like the nikola tesla ones


The word KarmaComa battled to translate was 'Mais'. Gotta consider that this was hundreds of years ago... 'Mais' as far as my 'ill skills' could go means 'but'.

'mais' from wiktionary
Conjunction
1 but

Interjection
1 an expression of surprise, disbelief, or frustration roughly equivalent to the English well, or sometimes yeah


Here's another translation of the image title (from Google )
"The Great Court of the Hotel Royal des Gobelins, or the skilful men who are established there for the Manufactures of the Crown Furniture, have raised a But to Monsieur le Brun, the first painter of the King, S. le Clercfe."

posted on May, 7 2018 @ 01:05 PM
link
Clearly you didn't research the Author from which this story derived. (Evliya Çelebi) Whom apparently was a Medieval Fictionist. However, his forethought was jaw dropping for the time, which in itself is enthralling! Hence the Flag!
a reply to: humanoidlord

i doubt sparks were depicted like that back then

this one is clearly an parade float, the same cant be said about the unicorns and the giants, they look pretty flesh and blood to me

and? there are a lot of more ridiculous things: politics, hollow earth, flat earth, reptilians... i could go on and on
at least this is an new subject that has never been on ats before

then why he drawed some stuff realistically while dont drawing the rest the same? but i agree many of the stuff here is fictional, the real headscratchers are the unicorns and the giants, they look very alive to me

also its not just fireworks, there is clearly ionization going in some of these pictures!

well that is very bizzare! its almost like they blotted out what was originally there and replaced with tottaly random BS

sometimes i wonder what is reality and what is fiction? its very easy to pick an random author that said too much and claim he is an fantasy writer

thank you!
I was indeed struggling with the word "mais", which means "but", and for which I could not find any other meaning, even in old French.

But then, I could have looked at the origins of the word.
Thanks for finding this out!

You try too hard, man.

"Those who don't want to change let them sleep."

originally posted by: humanoidlord
a reply to: Caver78

seriously people?
i know it has no paragraphs but its not that bad

Actually it IS, WORSE even...

I can't read french either.

Nah, I can leave this here too.

originally posted by: humanoidlord
i suggest you research anotaly fomenko, his theory is that all history is an big hoax, both ancient and modern


Fomenko is correct about that but one thing I am very curious about...

Rewriting history was the first step in achieving the New World Order. Source

“There are two histories: official history, lying, and then secret history, where you find the real causes of events.” ~ Honoré de Balzac

“The model of human prehistory built-up by scholars over the past two centuries is sadly and completely wrong, and a deliberate tool of disinformation and mind control.” Michael Cremo and Richard L Thompson, ‘The Hidden History of the Human Race’

jeez, okay!
just because i wanna bring something new to the game?