California Fog Disappearing and The Blob

Many of you who live here or have visited, especially San Francisco, have witnessed its obscuring opaqueness (which can be quite unrelenting while driving mind you!) 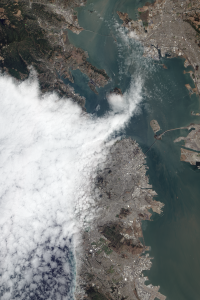 Sometimes the fog is so thick that you can barely see 10 feet in front of you.


Growing up here, I recall the fog throughout the year, not only in San Francisco, blanketing the whole city, but as far inland as 60 miles or more, making for treacherous Tahoe trips.


I haven't seen fog for years! It completely blew me away (punz). I have not seen thick fog,or any fog for that matter here in the Bay Area for at least three years.

The fog banks that reside off the coast of Northern California result from this same process occurring on a large scale. The warm air that sits above the expanse of the Pacific Ocean is humid, a result of moisture evaporating from long unobstructed exposure to the tropical sun. As the air moves from the warmer climates of the western Pacific toward the continental United States, it’s cooled by the progressively colder water. The newly cooled air pushes that moisture content out to condense on whatever particle is suspended in the air – often salt or other minerals kicked up by ocean spray. This forms the thick fog offshore, what is referred to as the ‘marine layer’.


The coastal fog relies on the interaction of humid and hotter water interacting with colder water originating from the Northern polar region and Alaska, yet the fog is nowhere to be seen.

Coincidentally, hours before I realized this fog situation, I read about an oceanic disturbance in the pacific ocean. 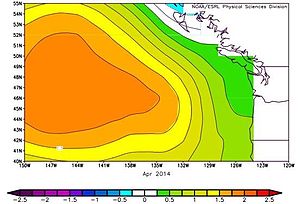 The Blob is a large mass of relatively warm water in the Pacific Ocean off the coast of North America. It was first detected in late 2013 and continued to spread throughout 2014 and 2015.

Upon further reading, the details and data regarding this "Blob" are legitimstely bizarre and possibly concerning.


The Blob was first detected in the autumn of 2013 and the early months of 2014 by Nicholas Bond of the Joint Institute for the Study of the Atmosphere and Ocean of the University of Washington, and his colleagues, when a large circular body of sea-water did not cool as expected and remained much warmer than the average normal temperatures for that location and season. 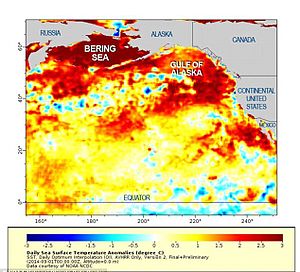 Some thought it was some natural part of a pacific ocean cycle like El Nino, but it has since bee scrapped.

A NOAA scientist noted in September 2014, based on ocean temperature records, that the North Pacific Ocean had not previously experienced temperatures so warm since climatologists began taking recordings.

The reason for the phenomenon is unclear. Some experts consider that the wedge of warm water portends a cyclical change with the surface waters of the mid-latitude Pacific Ocean flipping from a cold phase to a warm phase in a cycle known as the Pacific decadal oscillation (PDO).[1] This poorly-understood change happens at irregular intervals of years or decades. During a warm phase, the west Pacific becomes cooler and part of the eastern ocean warms; during the cool phase, these changes reverse.[13] Scientists believe a cold phase started in the late 1990s and the arrival of the Blob may be the start of the next warm phase. The PDO phases may also be related to the likelihood of El Nino events.


NASA climatologist William Patzert predicts that if the PDO is at work here, there will be widespread climatological consequences and southern California and the American South may be in for a period of high precipitation, with an increase in the rate of global warming. Another climatologist, Matt Newman of the University of Colorado, does not think the Blob fits the pattern of a shift in the PDO. He believes the unusually warm water is due to the persistent area of high pressure stationary over the northeastern Pacific Ocean. Dan Cayan of the Scripps Institution of Oceanography is unsure about the ultimate cause of the phenomenon, but states "there's no doubt that this anomaly in sea surface temperature is very meaningful"

Many know about the feverish debate about global warming, but we have bickered overr atnospheric temperatures, not ocean temperatures. Well, there is clearly something going on, as to why, we dont know yet, but the earlier picture of thr fog producing cosstal waters off of California and the more recent "blob"pictures, to me, show a strong correlation and explain the lack of fog. The timing also matches up exactly, with the blob first appearing in 2013-2014 and that is when the fog is documented as declining.


As fsr as effects are concerned:

Sea surface temperature anomalies are a physical indicator which adversely affect the zooplankton (mainly copepods) in the Northeast Pacific and specifically in the Coastal Upwelling Domain. Warm waters are much less nutrient-rich than the cold upwelling waters which were the norm till recently off the Pacific Coast.[15] This results in reduced phytoplankton productivity with knock on effects on the zooplankton which feed on it and the higher levels of the food chain.


Thats not good, at all.


What's more, the redwood forest of Northern California and Oregon could be in danger.


The fog hits the impassable wall of Redwood trees that are hundreds of feet tall. Moisture collecting on leaves and branches falls like rain to the forest floor; it’s quite literally a rainforest microclimate surrounded by an arid region.

However as the trees can grow to over 350 feet tall, the Redwoods need a special method to overcome gravity in order to pull water all the way up from their base. The water remaining on the leaf that doesn’t fall to the forest floor can be absorbed through the leaf surface and moved down the tree from above. This top-down process helps pull water up the extreme heights of the trunk from below like a siphon; but if the water ceases from above then an air pocket forms in the trunk, killing the tree.

edit on 4252018 by CreationBro because: Spell check

Couldn't squeeze these in on the OP


It keeps truncating the above URL here is a direct link:

Wiki on the Pacific Ocean Blob

But be careful. Saying you’re a Californian here is an invitation to get virtually lynched.

Interesting. I forgot to add to the OP this article, but there are many sources and data showing that the Coastal fog is definitely disappearing and less frequent:


In the East Bay I really cant recall seeing any legitimate fog for years and it used to get socked in at least a couple handfuls of times each year.

Ah Im not worried about the hecklers. I mean, we Californians kinda started that # anyway lol, making fun of southerners all being inbred morons (sorry guys, we actually love you and your women are the sweetest!) Haha.

posted on Apr, 25 2018 @ 04:54 PM
link
Interesting! I spent a fair bit of time in the Bay area visiting family over the years, and do remember that the last time I hadn't seen seen any fog. They live in Los Gatos, up in the hills, so when you look out the window, fog or smog is quite obvious. I remember asking something like; "Wow, I haven't seen any fog at all this trip." They chalked it up as having to do with the drought that was hitting the region.
Glad to hear of your observation. While I don't believe anyone really knows what is going on with the climate, it is good to find reports like yours that point out; "something is definitely going on."

Well, we had a good run.

posted on Apr, 25 2018 @ 05:08 PM
link
Given the nature of the length of climate cycles, it's hard to say. We've only been keeping in depth records on these things for a relatively short time.

For example, during the mega drought the snuffed out a lot of the cliff-dwelling natives in the Southwest, was there a lot of coastal fog? I'm not sure anyone knows. We only know that drought happened, not exactly what it looked like.

posted on Apr, 25 2018 @ 05:26 PM
link
a reply to: CreationBro
I know the fog in SF well, I lived in North Beach/Chinatown for a couple years. I was working in a restaurant on sutter st and walking home from work early one morning the fog was so thick I couldn’t see from one end of a block to the other. If I hadn’t known where I was it would have been easy to get lost in it.

It's getting perspective from the people on the ground that really brings climate change into focus.

I to here on the gulf coast (all my life) have noticed the changes. I noticed long before I even heard the word global warming.

I was homeless for a long time and when your out side most of the time for years and years the changes are more obvious.
I used to sleep by a river And it was important for me to know which months I would be cold. Used to be in april at night I could expect a chill and I would make sure to have an old blanket or sleeping bag , some warm cloths for when I slept. Now, it is so damn hot next to that river in april I can't even be inside my sleeping bag.

Could your fog issue be because of the meltdown? Who can really say? But my guess is this is part of the overall changing of earths climate.

The "June Gloom" has been a constant here in Southern California.
edit on 25-4-2018 by Sookiechacha because: (no reason given)

posted on Apr, 25 2018 @ 05:34 PM
link
I forbid you from wasting your time
sensationalizing things like fog any
further on this site.

What ever is depleting fog lets go there! Sorry
if I don't miss it lug'n 80.000 lbs of vehicle
down the road.

originally posted by: Sookiechacha
The "June Gloom" has been a constant here in Southern California.


Ask any old-timer Southern California resident and they'll tell you that the weather patterns have definitely shifted over the past couple of decades. June Gloom is busted up and spread out over more time. Thunderstorms in the desert during the heat of summer. No winter to speak of. It's a slow change, but noticeable.


Well, I've only been here since 2002. But we do get the high clouds and the humidity!

PS: Those dessert thunderheads look like giant UFOs with baby UFOs springing from the under carriage! WOW! They're beautiful!
edit on 25-4-2018 by Sookiechacha because: (no reason given)

cali was a desert before China became industrialized.

their pollution caused rain on the US west coast.


they started cleaning up their act a few decades back-
since then the sand has begun to reclaim the west coast.


I blame it on the butterflies!

posted on Apr, 25 2018 @ 05:58 PM
link
I'm probably wrong but I thought it was decided a few years back that the "blob" was a result of continuous radiation entering the ocean from the Fukushima/Daiichi nuclear disaster.

And no, it wasn't caused by the Fukushima disaster.

Interesting, I see that in several sources now. Good to know, thanks Phage.

That's in the Central Valley - - apparently same thing happening there.