posted on Apr, 24 2018 @ 10:49 AM
link
Well it was bound to happen. Another division of Americans based on race. Why not one for the Holocaust, or perhaps the internment of the WW ll Japanese. Maybe Abortion that has killed millions. Monuments to exploit hate, that surely nothing good could come from them.

We take down and villainize Civil War monuments and contemporary monuments, so how does this get a free pass ? You can't have it both ways, or can you ?

Your Opinions on this ? I have nothing left to say.

"The memorial and an accompanying museum that open this week in Montgomery are a project of the nonprofit Equal Justice Initiative, a legal advocacy group in Montgomery. The organization says the two sites will be the nation's first "comprehensive memorial dedicated to racial terror lynchings of African Americans and the legacy of slavery and racial inequality in America"

originally posted by: Plotus
We take down and villainize Civil War monuments and contemporary monuments, so how does this get a free pass ? You can't have it both ways, or can you ?

I'd say it's an extension of the SAME mindset.

I was thinking when I read the title was the memorial honoring the perps or the victims.

Like any statue or memorial, there is no law forcing anyone to look at it.

Statues are a physical representation of free expression. If this is what they want to communicate to anyone who wants to look or listen then they should be able to.

As far as confederate statues go, or even statues of our founding fathers, well, censorship is a tool of cowards and tyrants so if that's how they want to define themselves, they certainly have that right.

originally posted by: Plotus
Maybe Abortion that has killed millions.

What’s hysterical is there’s both a Japanese internment memorial (the Japanese American Memorial to Patriotism) and an entire museum in DC dedicated to the Holocaust.

originally posted by: JohnnyCanuck
a reply to: Plotus
Is this thread gonna be another exercise in Whitesplainin'?


No just WhiteGuiltSplainin now that you are here.

I was thinking when I read the title was the memorial honoring the perps or the victims.

How much difference does it even make.

posted on Apr, 24 2018 @ 11:05 AM
link
NAACP claims there were about 3500 lynchings of blacks from 1882 to 1968. Certainly horrible. However, we don't know how many were justified (i.e. lynching a criminal). To put that in perspective, more blacks die in gang/thug violence EVERY YEAR.

While I like to be a student of history and find museums of all kinds interesting, I still find this obsession the black community has with oppression to be destructive. I've been to several slave museums and they certainly were depressing but also informative. However, I feel like we need to focus on moving forward instead of constantly looking back.

But whatever... I sold out and now an Uncle Tom according to those who are woke.

posted on Apr, 24 2018 @ 11:26 AM
link
A single pillar for the Japanese, and an indoor holocaust museum. Were talking acres and acres of outdoor display not easily avoided. So it becomes less hysterical in those terms. The Holocaust museum is not a captive audience format. The Japanese Monument is not imposing, nor is it covering a vast outdoor area.


a reply to: Shamrock6

There are holocaust museums all over.
Big one in st pete fl

originally posted by: Shamrock6
a reply to: Plotus

What’s hysterical is there’s both a Japanese internment memorial (the Japanese American Memorial to Patriotism) and an entire museum in DC dedicated to the Holocaust.


Exactly. We memorialize people for many reasons, some for the best reasons and others for the worst reasons, and everything in between. And it's for our benefit... so that we do not forget... because when we refuse to learn from history, we make the same mistakes. For much the same reasons Ike ordered photos of the concentration camps and the inhumanity of the Nazis.

My great-great-grandfather was an officer in the Confederate Army. And what I would consider a war criminal for his acts during the war... but his commanding officers didn't see it that way of course. Others, however, do. And to the extent that there is now a memorial for his victims. I don't have a problem with that.

And for the same reason, I don't have any problem with this memorial. It was a shameful practice that was allowed to happen far too many times and for far too long.

Why not one for the Holocaust, or perhaps the internment of the WW ll Japanese.

There are a number of Holocaust memorials in the US, and a massive one in Germany (Berlin), the country in which it took place. But you know what there aren't many of? Statues glorifying Nazis.

Why is it so hard for right-wingers to acknowledge basic reality in this regard? Lynching was basically a form of terrorism in which people were gruesomely murdered to maintain a status quo of which the oppression of blacks was central. The Confederacy was basically an armed rebellion intended to preserve chattel slavery of black people. Some of the very same people who were erecting the statues were in the groups that were lynching people.

Essentially, your position seems to be that if we don't venerate men who fought to preserve slavery with statues and memorials in public spaces everywhere, we shouldn't memorialize anything, including victims of lynching.

It's really not all the different from saying that we shouldn't have Holocaust memorials if there aren't Nazi statues as well.

Why are lefties for tearing down confederate memorials (mainly ancient ones no less), but for erecting lynching memorials??

Why are lefties for tearing down confederate memorials (mainly ancient ones no less), but for erecting lynching memorials??


One side of history is always favored over another.
I don't agree with tearing down any monuments within the US, or disagree with building new ones.
All history should be remember or it isn't history but propaganda.

Can you lynch monuments and erect another monument to it.

Same kind of hatred began the former so lets rinse and repeat the latter.

There's no such thing as an "ancient" Confederate memorial. The Civil War was in the 19th century. Most of the memorials didn't go up until well after either. 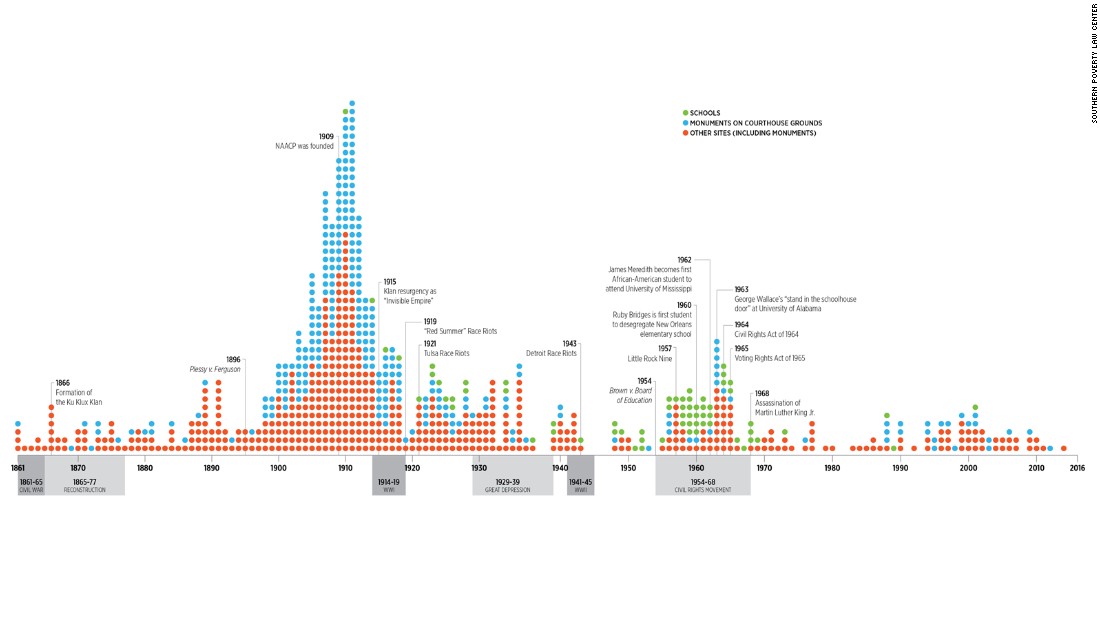 I think a distinction should be made. I'm all for preserving historic battlefields and memorializing fallen Confederate soldiers in the proper place (such as cemeteries) and Civil War museums to educate. I see that statues of Confederate leaders that litter courthouse squares across the South as different. It's the difference between veneration and memorializing and it's also about the use of public spaces.

originally posted by: neo96
Only in 'Murica.

Can you lynch monuments and erect another monument to it.

Same kind of hatred began the former so lets rinse and repeat the latter.


Only wingnuts would equate removing a statue with murdering a human being. Jesus.

I cant tell what that says, but factoring in the Law of Accelerating Returns, pretty much 100 years ago is like 'ancient history' today. In 10 years 25 years ago will be. Etc.