The Mimetic, Mythological, and Theoretical Human

posted on Apr, 19 2018 @ 10:03 PM
link
The consciousness of human beings has been evolving for at least 200,000 years, starting from the mimetic, progressing to the mythological, and finally hitting the stage we are currently entering, and progressing through, but with another part of us 'pulling back' - seeking to prevent the transition into a default theoretical consciousness. These three terms come from the work of the cognitive scientist Merlin Donald. 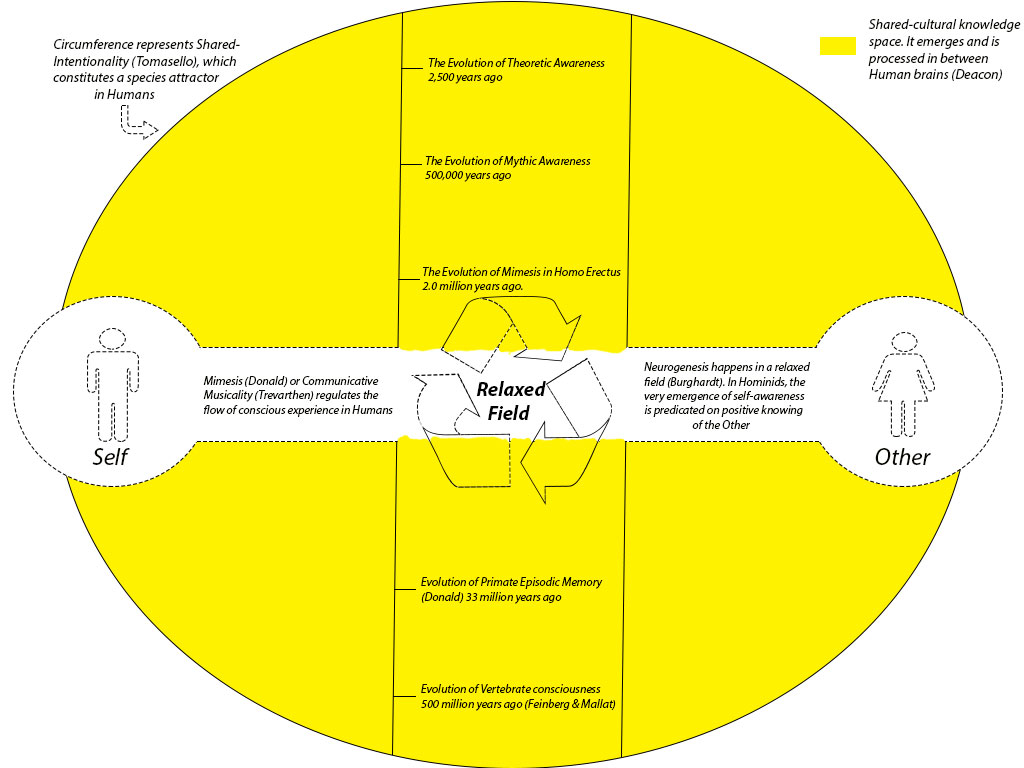 There is only one good, knowledge, and one evil, ignorance. - Socrates

Can you imagine the series of phase transitions that transformed Homo Heidelbergensis into Homo Sapiens? The consensus view is that paleontological record dates the earliest modern human skeleton to 200,000 years ago - which is astonishing.

This transformation is said to have occurred in the horn of Africa, between the East Ridge valley and a series of lakes that fill up when the Eastern
monsoons from the Indian Ocean drench the east of Africa, and not India, as it does today.

More recent evidence implies that Homo Sapiens may have evolved in the North of Africa 300,000 years ago, which similar to the East of Africa, periodically underwent massive transformations in climate and with it, the necessary back and forther between one 'homeostasis' and another that could force the evolution of the brain-mind into deeper biosemiotic zones of reality.

In any case, it can be difficult trying to imagine what a human mind was like so long ago, growing in such a different semiotic environment, and not having any of the 'semes' that populate our unconscious, I imagine the human mind was very different from the modern one - and perhaps even the mythological one as well.

If mimesis is understood as the fact that social organisms mirror one another, then perhaps the first few hundred generations of humanity has been typified by a mode of self-organization that is profoundly organized around the pragmatic facts of living and being in the world with others.

The mimetic meant that the 'things which matter' i.e. which stabilize, order, and empower the self, were emphasized, for the simple reason that the environment permitted such a mode of self-organization. The 'things which mattered' were the causal factors which determined their feeling states; food eaten, ways of being - understanding oneself (introspection) in relation to expressed behavior; seeing the symmetries between self and other, and ordering social life according to these perceptions. Since 'culture' is socialized in terms of what humans 'care about', I can see the beginning of our species as being profoundly free from the mythological constructs that infect our present day species.

If evolution evolves according to the notion of the 'path of least resistance', then a stable and prospering environment would incrementally support a way of being that enhances human functionality - insomuch as human functionality improves when our environments improves. With an 'improved environment', narratives, or ways of relating to ourselves and to others, as well as to the 'universe' at large, would have become more and more motivated and reconciled with the motive of love. Its hard for us damaged and traumatized brain-minds to appreciate this 'Edenic' consciousness. There was no writing (what need would there be for it?); there was no clothing - the North of Africa during such a period was probably remarkably conducive to nudity. But also, 'symmetry', or 'reflection', must have been deeply recognized. Every state - the "flaming sword" of genesis - the mindfulness that doesn't get lost in idiosyncratic rumination - keeps the self attuned with reality. Mimesis is not merely in action; it can also be reflected psycholinguistically. In mind and in heart; we call this power 'psychic' - the reflexive representation of other thoughts and feelings in your mind, and knowing from whom they come and what it means. Reflexivity of self-organization seems to have been the primary mode of being. Indeed, things were so soft, so lucid, so relaxed, that there really was no want nor a need to explore or know. Reality was absolutely complete in this mode.

Such "growth" of the mind derives from the fact that there exists something like a 'central point' from which information can become more and more refined. Positive affect - love - allows an 'elaboration' of cognitive capacities into more refined modes of representation within the brain-mind. Information correlation can go very high. But then again - motivation is the basis of inquiry: knowing something is dependent upon a semiotic background which compels the motivation into existence.

The Descent Into Mythology

Mythological consciousness seems to begin around 13,000 years ago, at the end of the ice age.

Gobleki Tepe depicts an interesting situation whereby humanity begins to record its own fall, and 'loss of its head', and descent into a 'reptilian' territory. This is 11,000 years ago, still a very long time before humanity is 'formally' created in Mesopotamian self-image.

Mythological consciousness in Sumer precedes that in Egypt, although the architectural feats of the Egyptians appear far more impressive. The minds of humans in each society must have been slightly different as well. Hieroglyphics are not cuneiform script. They are alike, but the latter is an improvement on the former.

Still, there were traditions from both worldviews which compelled these inventions. Magic and practical intelligence became divinized and deified. These ways of thinking spread throughout the world - to the East, to India, and to the west and the north.

Mythological consciousness is deeply obsessed with magic; as well as being, at its root, traumatological, and therefore containing elements of sadomasochism.

Mythological consciousness is anti-epistemological. It cherry picks for theories, but isn't really interested in theories for theories sake: the mythological mind is bent on temporal power - over other people, mostly for sexual and sensual ends, although holding power becomes intoxicating In itself (despite its being based in 'love for the other').

It just cares about feeling, because it is has eroded its own internal representational processes; coherent thinking becomes painful; thinking which supports the irrationality of their feeling i.e. helps to maintain the 'truth of their feelings', while dissociating the traumatic and traumatizing elements which create it.

Mythological consciousness is Judaism, Christianity, Islam, Hinduism, and every religion that exists on this earth. The very need to 'have a pet narrative', or a specific religion, bespeaks a profound discomfort with ambiguity: the mythological consciousness is over-determined - NEEDS TOO MUCH - to make assertions of truth, or conversely, to doubt everything they interact with (which is just another version of over-assertion)

The Ascent of the Theoretical Consciousness

Magic is magic. People need to get over the 'awe' factor and be able to look upon the natural world with both a healthy reverence for its sheer awesomeness, but also a healthy skepticism which doesn't grasp at just any explanation, or for that matter, allow itself to become benumbed by the 'meaning' of the interaction, as if the 'how does it happen' didn't matter.

The brain has two modes of self-organizing. There is whats called the 'mid-line

posted on Apr, 19 2018 @ 10:04 PM
link
structures' , and this becomes active whenever were affectively involved and personally affected by something.

All mystical experience will happen through this mid-line structure of the brain. It is both affective and personal; it overwhelms (by feeling) and transforms (a persons sense of self).

The lateral functions of the brain are like 'holding' something. The metaphor of brain-activation at the dorsolateral parts, and 'holding' something in your hands, is profound: whenever we are scientifically analyzing something, or making subtle differences between one thing and another thing, these dorsolateral parts of our brain are activated more than the midline parts. We are not thinking about ourselves - but focusing completely on the nature of what were observing.

Now, there is also an 'underbelly' to this process. The orbitofrontal cortex is involved in the downstream regulation of dopamine and noradrenaline from the tegmentum area of the brainstem. It is from the OFC that we are able to emotionally regulate ourselves - and so, we 'hold ourselves from below', literally at the area just above our eyes balls, and hence, the front-bottom part of the brain, which, unlike the 'cognitive' perceptual parts of the dorsolateral cortex, are focused on the 'feelings' which interfere in the perceptual process itself.

Mystical experience is like being in the 'core' of your brain. Whereas the sobriety of theoretical consciousness is like holding the universe in your "mental hands".

Which is more powerful? Without the former, of course, one will never experience the depths of being. But without the latter, the person loses all touch with objectivity, and therefore, with truth itself.