posted on Mar, 30 2018 @ 11:45 PM
link
Wow well they have officially gone full retard . A high school senior was Arrested and suspended for posting a picture of an air soft gun he got for his birthday on snapchat.

He posted it showing the sticker in full view saying it was a toy gun with the ominous message " have a nice day" and a smiley face. 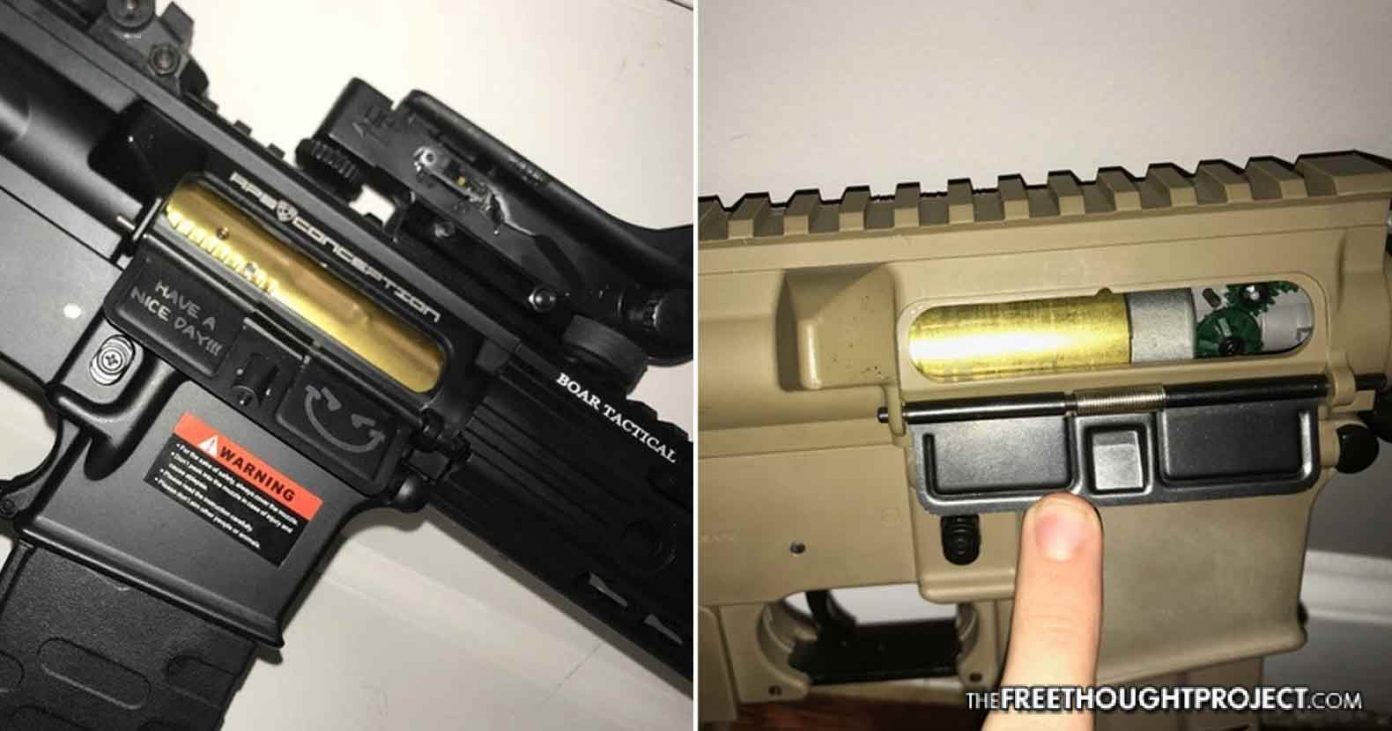 There was no threat and it is an obvious toy gun yet they pulled him out of class , searched his belongings, arrested him, then called his parents to tell them what happened and the police were on there way to search the house.

And they came and searched the parents house.

I would be livid and how the hell do they have any right at all to search him or his parents house over a toy.?

No...sorry a picture of an effing toy.

OODBRIDGE, Conn. (WTNH) – A high school student was suspended and arrested after posting an image of a toy gun on social media.

Zach Cassidento, a high school senior at Amity High Regional School was suspended and arrested as a juvenile after he posted a picture of a toy gun, or what’s called an “airsoft gun,” on Snapchat.

a lot of those pages will have pictures .

Are the cops gonna raid all of them too ?

It's his own fault. If he had simply posted a picture of a loaded AR-15 with a message about shooting students, nothing would have happened to him. Kids these days!

Is there anyone left who doesn't realize by now that this is an agenda being driven to scare people? Either the loony tunes with a gun will get you or the cops will. What's the difference between the good guys and the bad guys today, anyway? They have the same weapons, they use the same tactics, they wear 'colors' to identify themselves to their victims, and they use physical force to enforce their will on others.

I'm trying to understand how the police can demand to search the home when the toy is clearly identified as such? Illegal search and seizure? Malicious prosecution? Abuse of power?

Someone needs a lawyer, and they need a lawyer fast! Even minors have rights.

posted on Mar, 31 2018 @ 12:07 AM
link
Connecticut is full of looney NY commuters and they're getting what they demanded.
Progressivism is rabidly anti-gun (except for the government)
Arresting and searching his house?
Straight up Gestapo, I hope they get sued.

He probably just unfriended the wrong person in his school. It's a miracle he didn't get 'swatted' instead.

What was he arrested for?

A school suspension is overreach from the schools.

An investigation into this kid by law enforcement isn't.

Don't be retarded on social media.

If this catches on, all teenagers will pull this stunt to avoid having to go to school.

Stupid that in the 50's you could show and tell your parent's rifle in class, 20 years ago Westerns were still popular but now just mentioning toy guns will get you expelled from school. Social engineering? Nah..

originally posted by: BotheLumberJack
a reply to: notsure1

just mentioning toy guns will get you expelled from school. Social engineering? Nah..


also remember to teach your kids how to not eat a poptart and make it a gun.


originally posted by: BotheLumberJack
a reply to: notsure1

just mentioning toy guns will get you expelled from school. Social engineering? Nah..


also remember to teach your kids how to not eat a poptart and make it a gun.

Thanks, almost forgot that one. That would probably go for toast, waffles and hotdogs too.

That's what I figure happened. The report mentioned that another student had tipped off the school to the picture.

Must be part of that anti-bullying campaign... you know, the one where bullies learn the system and are protected, while their victims are classified as bullies?

posted on Mar, 31 2018 @ 01:55 AM
link
this is completely insane. first off he broke no law. so there was no reason whatsoever to arrest him, or to search his home. whatever judge wrote the search warrant needs to be disbarred and arrested for illegal search and seizure (if the cops had a warrant they are not guilty themselves). whatever cop asked for the warrant needs to also be charged, as they should also have known full well there was NO REASON to even ask for a warrant.

the school principles/school officials that both contacted the police as well as suspended the student also need to be criminally charged for their overblowing of things and the harm they caused to the student. social media is far outside of the school grounds. and as such they have no authority to do anything about posted on it in the first place. if it was an actual threat (read that as posting something like "i am going to kill everyone"), then that should have been passed along to police, as it would be a police, and not a school matter. so the suspension is completely invalid. and need to be immediately rescinded, with any notation of the event completely stricken from the student's record. as well as any marks the kid may have missed from not being in school, given full marks for. then the school system needs to give a full apology for tis happening. and because it made the media, full media attention needs to be given to the apology, and why such a happening was completely wrong. as well as similar apologies from the police, the judicial system and the city also give=n equal treatment in the media. as well as retractions from all media this crime was reported in.

then on top of that the kid and his family need to sue the city, police department, police officers involved,school system, and school officials involved, and the kid who reported the issue for millions of dollars. since it seems that only by loosing millions of dollars and criminal charges may stop this type of insanity. people might think twice before doing the same thing if they both end up in jail and loose everything. this needs to STOP. they can't ever seem to be able to do anything about those people who are actually threats. yet they come down hard on people who have done nothing wrong? what is wrong with that picture.

Even if he wasn't legally allowed to own an AR-15, he sure is allowed to post a picture of himself holding one. What's next? Kids on a hunting trip can't post pictures? Kids playing with Nerf guns? Complete nonsense.

Schools should not be allowed to expel or in any way punish students for what they do at home, unless the student has actually broken a law that would indicate they were a threat to other students. This kid didn't break any laws. This wasn't a credible threat. You don't get to interpret anything with a gun as a threat.

I hope they sue the pants off the school and police department. I typically don't like lawsuits, but it's the only real effective way to change things these days.

I'm not even going to fault the kid who thought it was a threat. Kids are idiots, and I imagine fairly sensitive these days. The freaking adults should have known better.

The weird part about all of this is that the Parents grew up with this # being normal, so what changed their way of thinking? Programming? I agree, it's all Sh##. The only threat here is about the idiots making this an issue, it's not.

I think it's overreacting to make sure this place isn't the next school shooting. I kinda get it, but it's also very scary.

originally posted by: Domo1
a reply to: BotheLumberJack

I think it's overreacting to make sure this place isn't the next school shooting. I kinda get it, but it's also very scary.

My take too. Schools are over a barrel and can't afford to take the risk of body counts, litigation or questions in the Press. Same with the police who have to go the full mile 'just in case.'

It's just a case of modern fears and embarrassing instead of tragic.

It's becoming scary yeah, but only because someone wants it that way. Fear controls entire populations, it's how they've controlled us for the past several thousand years. Common sense doesn't equate to most of the younger crowd anymore. It's like an ancient quote to them.

posted on Mar, 31 2018 @ 02:37 AM
link
I think the police should just let things go again back to the pre massacre days.... When everyone on top of that high horse were hemorrhaging 'why did the police or fbi not act' on Cruz' behavior. ... /NotSarc

This is seems very excessive, and it is. But this is the society in America in 2018, that excess is based on a precedence years and many dead kids in the making.
.
Cruz' behavior, along with most American mass murderes always begin and follow the same paradigm- I'll try to get attention, im just joking with toys, then radical views, then another possible good old American crisis.

Gun confiscation is obviously not the solution. What I fail to understand is the fascination with guns, or where these kids keep getting them from.
The barbarism starts at home, Morrissey would concur..

Who here is going to save face and say the caption of 'have a nice day' isn't what a sociopath would hint or give a cheeky off the cuff mention before the 'mentalism' kicks in...
edit on 31-3-2018 by odzeandennz because: (no reason given)