Hampton, GA – A 7th Grade social studies teacher tasked with teaching his students about Asia, Africa, and the Middle East, recently gave his students an assignment to write a letter to Congress supporting gun control.

Blue Lives Matter obtained a copy of the assignment.

The assignment “topic” was listed as “You are trying to persuade lawmakers to have stricter gun laws to help prevent another school shooting from taking place.” 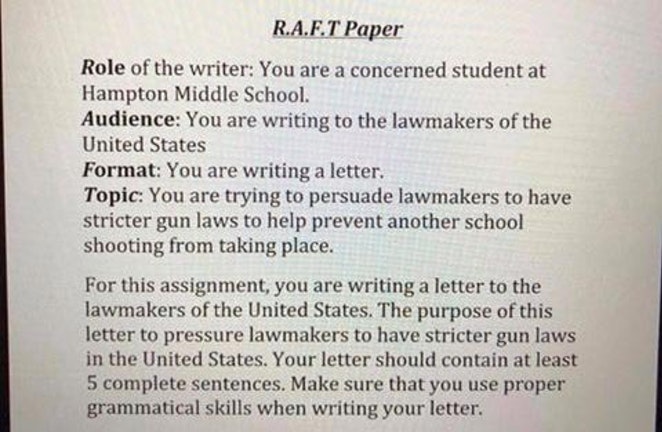 A police officer, father to one of the students, discovered this sickening assignment, and called them on it. The school actually agreed and struck the assignment. Also, they stated had it been submitted for approval, it would never have been approved. They "spoke" to the teacher and have promised it will never happen again.

So, by any means necessary, now includes indoctrinating children directly. How sickening is this liberal mindset that they think this is acceptable??? Really??? The fact that a teacher thought this was a valid assignment for children truly questions their own character IMO.

posted on Mar, 30 2018 @ 10:07 PM
link
7th Graders only have to write 5 compleat sentences when doing their writing assignment? That's seems way to easy.

posted on Mar, 30 2018 @ 10:11 PM
link
a reply to: Krakatoa
So it seems like a proper assignment with a sinister act in mind. Then through proper channels the problem was fixed. Does not seem very news worthy to me.

originally posted by: Allaroundyou
a reply to: Krakatoa
So it seems like a proper assignment with a sinister act in mind. Then through proper channels the problem was fixed. Does not seem very news worthy to me.


The fact that this teacher (social studies teacher) even considered such a biased an inappropriate assignment for a 7th grade class is not concerning to you? This is not the first occurrence of this type of thing, but it sure is the lowest grade I have seen this attempted.

These are not even teenager children. These truly ARE children!!! Yet, a person in the role of power over their grades now and the rest of the year, deems it OK to foist this assignment that did NOT get approval by the school (breaking rules is OK for teachers now)?

originally posted by: Chadwickus
a reply to: Krakatoa

One person, given charge and trust over CHILDREN, uses his political bias to attempt a form of indoctrination. That is OK with you? I would have the same reaction if it was a pro-gun assignment. It was an inappropriate topic, and is increasing in frequency in the school system.

But, you keep your own myopic viewpoint, and ignore the growing trend.

originally posted by: Allaroundyou
a reply to: Krakatoa
So it seems like a proper assignment with a sinister act in mind. Then through proper channels the problem was fixed. Does not seem very news worthy to me.


It is news worthy.
It is a teacher trying to shape the views of students.
How often does a teacher try to do the same thing, without be called out for it?

originally posted by: Chadwickus
a reply to: Krakatoa


No. It seems to be all liberals.

posted on Mar, 30 2018 @ 10:26 PM
link
a reply to: Krakatoa
It is very concerning to me actually. The subject that was assigned to the children only helps to sway their ideals in a certain direction. That is not cool. But the simple fact is that the problem was handled using proper channels. And if this bothers you so much should you not be out complaining and parents being parents? The same thing happens when a kid goes home and hangs around the parents and they are watching FOX/CNN. Indoctrination is the term and it happens no matter what.

posted on Mar, 30 2018 @ 10:28 PM
link
That seems like a pretty complex assignment for a 7th grader. I teach college English and would be surprised if I could get freshmen to write an argument paper with those instructions. I'm not sure a 7th grader knows what "lawmaker" means.

posted on Mar, 30 2018 @ 10:28 PM
link
a reply to: c2oden
And again I will say it. A child being home with parents that watch the news is no different than what this subject matter is.

Just seems you’re quick to label a whole group because of the actions of one person..

posted on Mar, 30 2018 @ 10:34 PM
link
But at home, that is THEIR HOME and family. A school at that age is NO place for political partisanship. The schools role at that level is to teach the curriculum approved by the school board, which is usually in line with the parents wishes in that community.

What happens at home between parent and child is the parent's business, and not that of a teacher with an agenda.

The fact that it happened at all, and had to be reversed should be concerning everyone. That a teacher of children would even consider such an assignment, let alone not have it approved prior to handing it out to children under which he has control is simply unbelievable to me. If this was at the high-school level, it would be less an issue IMO since they are teens being prepared for real life, and (hopefully) would see though the obvious bias in the assignment.....question it, and drive discussion.

If the assignment was asking the student to write 5 lines what THEY thought would help prevent another school shooting, that would be better as it would not establish a fixed position and set bias in a young immature mind. That is indoctrination not teaching.

originally posted by: Allaroundyou
a reply to: c2oden
And again I will say it. A child being home with parents that watch the news is no different than what this subject matter is.


Yes it is.
They are the parents of that child.
They can talk to the child about what was on "the news".
They did not tell the child to write about gun control.
That teacher did.
How would like it if a teacher told students to write letters to the NRA supporting the 2nd Amendment?

You'd be cool with that?

Even in my college courses I would never force students to write on a subject in only the way I (or whoever) wanted them to. Why not teach writing skills and let the students choose their own subject? That's part of the learning process - understanding what kinds of topics make good arguments.

Honestly this looks kind of fake to me, but who knows.