There is not a 1st Amen right to advertising.

As usual, Ingraham used her platform to denigrate. But thats free speech.

The kids used THEIR free speech to respond.

The advertisers left. Behavior has consequences. "The party of personal responsibility" needs to stop whining.

Ok fair enough. I mean he would never go after a kid that survived the shooting. 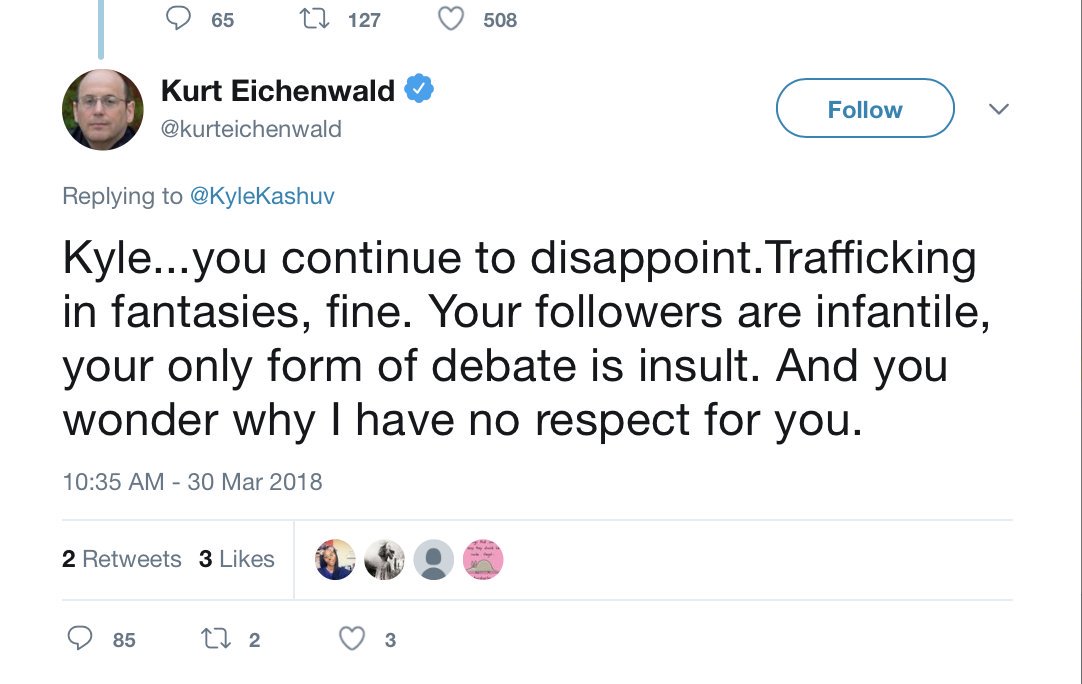 So I guess, seeing as how the boycott of Ingrahams advertisers wasnt about politics as we are told, but about a professional attacking a child survivor of the parkland shooting, I guess everyone including david Hogg will be clamoring for a boycott of MSNBC.

Oh wait, whats that they wont? yu mean they are hypocrits, and this is really just all about politics?

Say it aint so!

Eichenwald claimed that he was trying to insult a different kid, and got his name mixed up with kyle. One, there is no proof thats true. Secondly, so what its cool to attackk some other kid cause he was rude? Well Hogg, who is untoucahble apparenltly, was also very rude, calling people profane words and killers for supporting the NRA or other 2nd amendment causes.

But you know what, unlike Hogg, who has called people these vile names and refuses to accept an apology, Kyle is more forgiving.

On a more serious note, Kurt: If you made a mistake and you’re truly sorry, apology accepted. We should all be more forgiving — including you (and others) of Laura Ingraham.

When will you and MSNBC do the same for Laura? twitter.com... …

I just wanted to point out that as I and many other people said, this boycott against Ingraham is all phony outrage, and the idea that these parkland kids are sacarosant and cant be questioned in any way only applies to the kids that the progressive people who want gun legilsation agree with.

Kids that they are against caan be challlenged and called names with no consequence.

Too bad I already boycotted Fox and MSNBC...


I get my lulz from Cnn.


If we fall for the narrative that we can no longer be critical about people in the media, or people with different opinions, then we become one step closer to an authoritarian state.

Either we are allowed to criticize everyone or no one.


Nobody gets to be untouchable that just ignant.

Eichenwald is cancer and MSNBC caused mesothelioma... we're entitled to financial compensation now.
edit on 30-3-2018 by burdman30ott6 because: (no reason given)

originally posted by: Lysergic
a reply to: DBCowboy

Either we are allowed to criticize everyone or no one.


Nobody gets to be untouchable that just ignant.


Not if you get to hurt little feefee's.

Ingraham didn't even really insult so much as point out an inconvenient truth: because David Hogg is a white male, likely straight he has to better than merely good to get into schools like UCLA. It doesn't matter that he's a leftist saint. He's getting knocked off because he doesn't check enough boxes in any column in the admissions process when it comes to SJW weighting.


Be who you are

Take off that mask.

posted on Mar, 30 2018 @ 03:08 PM
link
I'm an outsider (Europa )and really can't understand this. A kid is insulted ask advertisers to boycot they do it... An appology not accepted. A carreer ruined. So a 17 year old hold that much power that he controls advertisers. Yet hasn't the moral to see what he did , But wants to protect america from the bad guys by stricter gunlaws. At the mean while he is dickriding on his fame. And noone can speak their opinion against him. CNN is obsessed with the brad. That also tells people to # off (right?). Absurd !

There is not a 1st Amen right to advertising.

Solidified in corporate person hood that gives some/not all rights to them.

This extends to money being spent to say vote for me the other guy sucks and spending money on an ad to buy twinkies.

So deal with it.

originally posted by: Lysergic
I get my lulz from Cnn.

Uh-oh... that means you're lulzing with everyone who CNN has lulzed with in the past, dude. I'd go to the clinic and have them run a fake news test on you. You don't want anything important to shrivel and fall off now, do ya?

When they are being used as a useful idiot.


It's a tactic our leaders adore.

posted on Mar, 30 2018 @ 03:10 PM
link
Just waiting for all of the people denouncing Ingraham about how disgusting she was for attacking a kid on the thread about Hogg and that boycott to come on here and say MSNBC should also be boycotted.

Then wait for them to boycott firearms manufacturers.

Gonna be a LONG WAIT.

Maybe the mask is his fetish. Nobody cared who Kurt Eichenwald was until he put on the mask...

originally posted by: Grambler
Just waiting for all of the people denouncing Ingraham about how disgusting she was for attacking a kid on the thread about Hogg and that boycott to come on here and say MSNBC should also be boycotted.

You might die of holding your breath? I mean we are talking about a bunch who lose their snip and want to ban guns when a child is killed by a bullet, but celebrate on the streets with a pink pussy hat on how a woman has a right to kill a child in their belly?

Abortion control does not compute for them.

posted on Mar, 30 2018 @ 03:15 PM
link
She's always been a scumbag. I'm all for boycotting or turning the channel for any of these scumbags...right wing or left wing. MSNBC or FOX... No room for this type of hate and childish antics.

Laura is a Christian..."What would Jesus do?" Apparently Jesus would insult a kid for his grades and not getting into a college, instead of actually debating him on the issues he's bringing up.

Not sure why anyone is watching her or any of these hate mongers. The response is usually along the lines of "...she brings up some good points etc etc>." That's a whack reason to listen to someone. The broken clock in my dining room is actually right 2 times a day. Should I keep it because it has some good time keeping once in a while or should I replace it with something that's right all the time.